Accumulations of drifting snow are the most plausible explanation for the presence of a number of puzzling alluvial fan deposits found inside large impact craters on Mars, conclude geologists John Grant and Sharon Wilson of the Smithsonian’s Center for Earth and Planetary Studies in a new paper in the journal Planetary and Space Science.

Studying images of a region known as the southern Margaritifer Terra taken by instruments aboard the Martian Reconnaissance Orbiter, Grant and Wilson believe at least some of the fan formations inside Holden, Eberswalde and other large craters were deposited by slowly melting snow that collected high-up in shaded alcoves in the crater rims.

Image above: This alluvial fan located inside a crater in the southern Margaritifer Terra region of Mars originates from well-developed alcoves in the crater wall. (Image B is a close-up of the framed area in image A.) The fine-grain nature of the sediments lead scientists to believe that they were deposited by gently melting snow over a long period of time. (Mars Reconnaisance Orbiter Context Camera image)

“Much like in the Rocky Mountains or anywhere else, when it snows and the wind blows the snow accumulates in those depressions,” Grant explains. Gentle freeze and thaw cycles caused by seasonal temperature changes on Mars did the work of shattering the rocks and the sediment was transported out into the fans with uniform and limited intensity runoff.

The fans “are hundreds of meters thick and in some places kilometers thick and they’re tens of kilometers long. They represent a fair amount of erosion and transport over a fairly long period of time, but it is unclear how much of the fan sediments were deposited by this process” Grant says. 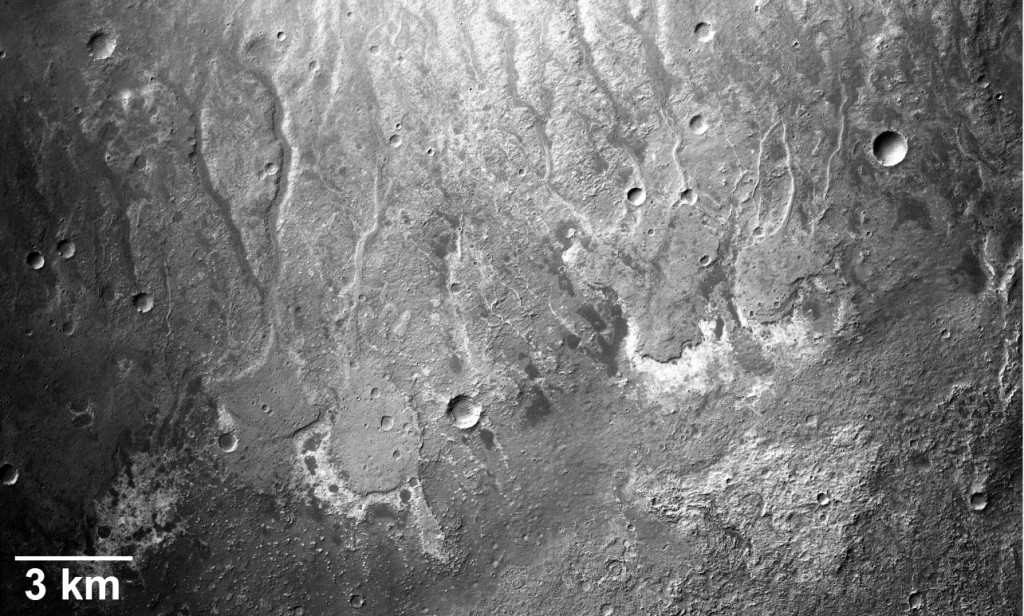 Image above: The lobes at the end of this fan deposit are somewhat rounded, an indication of deposition into shallow standing water which would have accumulated in the bottom of the crater. (Mars Reconnaisance Orbiter Context Camera image)

Because the deposits appear to be made up of fine-grained sediments, Grant and Wilson ruled out heavy rainfall as their source. “There is no evidence of an energetic flush of water washing out gravels, cobbles and big blocks like we see here on Earth,” Grant says.

Also, repeated, relatively light snow flurries that accumulate over a long period offer a plausible explanation for the absence of valleys and fans on the plains surrounding the craters. Such signatures of moving water would be visible on the surrounding terrain and on the fan deposits themselves had sustained rainfall occurred. Thin coverings of snow not accumulated into depressions would simply melt into the ground or evaporate leaving no trace, Grant says.

The scientists also ruled out vaporized and then precipitated water from contemporary asteroid or meteor impacts as a local source of the water that deposited the fans.

Image above: These two Martian impact craters have no alluvial fans yet do exhibit topography (white arrows) that could trap and accumulate snow. (Image: MOLA topography over THEMIS IR data)

“It’s kind of an interesting take on Mars because it tells you that well, it’s certainly not the Amazon rainforest with heavy rains and runoff and lakes, but it might be a little bit like parts of Antarctica, where it doesn’t snow a whole lot but it does snow and that snow blows around and accumulates in places. In Antarctica that leads to the formation of glaciers, but on Mars we don’t think the snow in the fan source alcoves was thick enough for that to happen.”

Grant and Wilson estimate the fans in Holden and Eberswalde craters were formed about 3 billion years ago or somewhat less, “and that’s young for water formed features on Mars,” Grant says. “If correct, this interpretation suggests the fans may be associated with a globally occurring late period of water activity on Mars,” the geologists write.

Today, scientists know that there is water trapped as ice at the Martian poles, as well as other near-surface ice deposits and underground water. Still, “nothing is going on now on the Martian surface to match the scale of the water activity that created these fans,” Grant says. “We do know that over time the current environment on Mars can look very different than it does now. Sometimes the tilt, or obliquity, of the planet’s axis is much greater so that the poles get turned much more toward the sun on a seasonal basis. That’s not to say that suddenly palm trees sprout, but it does mean that there is circulation of water from one place to another.”

Yet for Mars to return to the high level of water activity on its surface that it experienced billions of years ago, a major geologic event would need to occur, Grant says. Robust and extended volcanic activity releasing massive amounts of gasses into the Martian atmosphere might do the trick. A large asteroid impact vaporizing a lot of material and volatiles might also work. But these scenarios are extremely unlikely so late in the history of the planet.–John Barrat