NASA’s InSight probe, scheduled to land on the surface of Mars in November 2018, will be boring.

Boring a hole, that is. It will drill 15 feet down into the Martian surface to help geologists gain new insights about how this rocky red planet was formed, which in turn will provide clues to how Earth and the other planets of our solar system also formed. 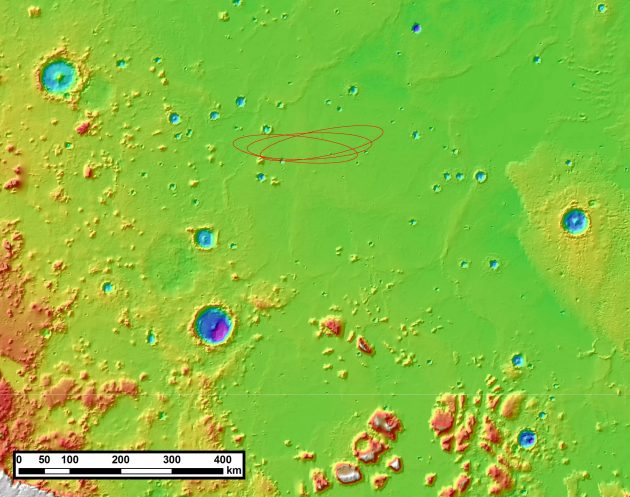 Red ellipses in this map of Mars’ Elysium Planitia represent the region in which the Mars InSight lander is expected to touch down. Warm colors indicate areas of higher elevation, while the cool blues and greens represent areas of lower elevation. There are roughly 2.5 miles of difference in elevation between the highest and lowest points, and very little variation in elevation in the area where InSight will land. (Image courtesy Gareth Morgan, CEPS)

For the team responsible for picking the probe’s landing spot, a boring or featureless surface target on which to stage a safe and uneventful landing is ideal.

Bruce Campbell and Gareth Morgan from the Center for Earth and Planetary Studies at the Smithsonian’s National Air and Space Museum, helped the InSight team narrow down a very short list of landing sites. They analyzed data returned from the shallow radar instrument aboard the Mars Reconnaissance Orbiter (MRO) that is now circling the planet, and from the radio telescope Arecibo Observatory in Puerto Rico.

The team winnowed down potential landing sites from 20 to just four, and then to one. Scattered throughout a western stretch of the broad Martian plain known as Elysium Planitia, the short list of sites were all at the base of the large shield volcano, Elysium Mons is similar in many ways to the basaltic shield volcanoes of Hawaii, like Mauna Kea. Emi Koussi, a shield volcano in Chad, also was studied as an analog to Elysium Mons. 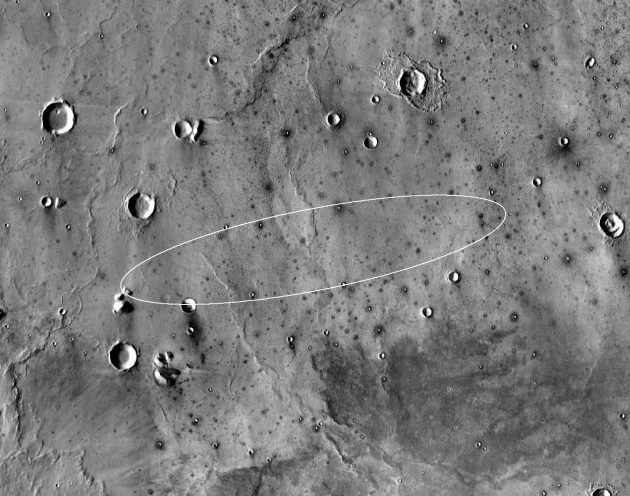 A second view of the area on Mars where the InSight mission is scheduled to land in November 2018. The ellipse marked is within the northern portion of flat-lying Elysium Planitia, about four degrees north of the Martian equator. (NASA/JPL-Caltech image)

A safe and secure landing spot is paramount. It can’t be too rocky, lest a probe leg get caught on a rock and the lander topples over. It can’t be too dusty, lest the lander end up plunging into a depression filled with meters of soft, silty Martian dust. The spot also needs to be reflective enough for the lander’s altimeter radar to work properly as it guides the probe down to a gentle landing.

“As the lander goes through the atmosphere and deploys a parachute, onboard radar is working to determine the altitude of the spacecraft,” Morgan says. “Imagine a stealth fighter plane, which is invisible to radar. There are parts of Mars that are naturally like that. We had to pick a good place where the radar could ‘see’ the ground.”

The team analyzed short-wave Arecibo Observatory radar data, which is sensitive to rocks just inches in diameter, and long-wave MRO radar data, which can detect obstructions and large-scale surface undulations, such as dunes and cliffs 30 to 300 feet in size.

“West Elysium Mons is a several-billion-years-old volcano with reddish soil and relatively few boulders scattered about,” Morgan says. “In other words, pretty flat, not very complex, and what we consider to be safe.” 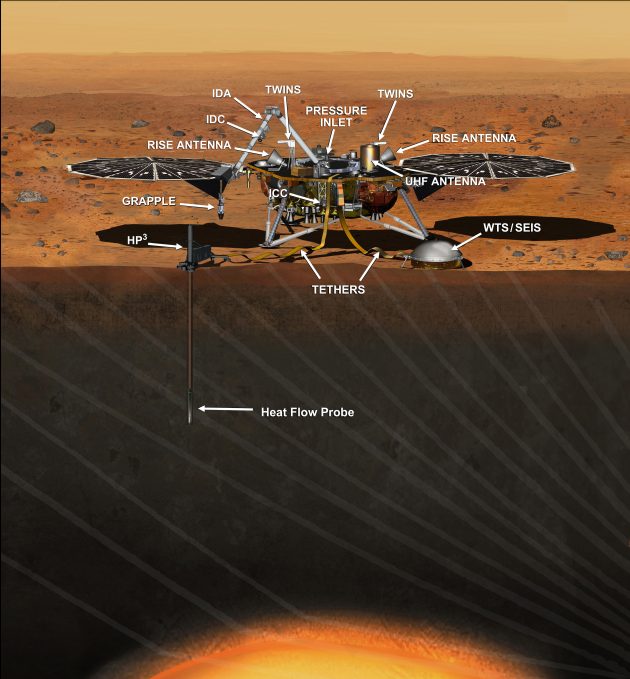 This artist’s concept depicts the stationary NASA Mars lander InSight at work studying the interior of Mars. The InSight mission (short for Interior Exploration using Seismic Investigations, Geodesy and Heat Transport) is designed to investigate processes that formed and shaped Mars and will help scientists better understand the evolution of our inner solar system’s rocky planets, including Earth. (NASA/JPL-Caltech image)

The Arecibo data had been previously gathered over a seven-year period, while the MRO satellite data was collected from many targeted passes over the region.

Knowing what is beneath the Martian surface at some depth is also critical for the mission’s success, since the InSight lander will be drilling deep to gather data on the composition and temperature of the planet’s interior, measuring seismic activity, and with it, the rate of meteorite impacts on the surface.

Because Mars is less geologically active than Earth—for example, there are no plate tectonics to rearrange the crust—evidence from Mars’s early history has been better preserved. This will help scientists better understand how the rocky inner planets of our solar system formed. 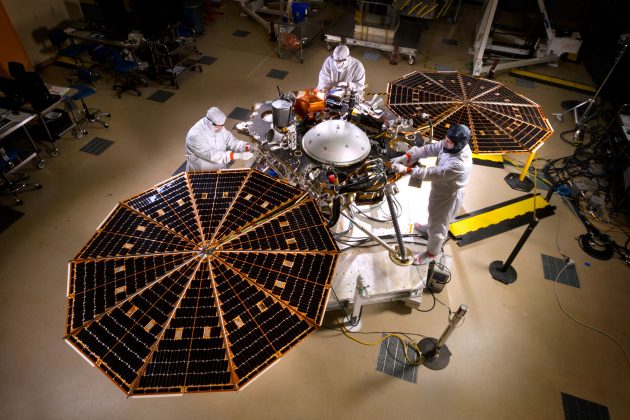 Two solar arrays on NASA’s InSight lander are deployed in this test inside a clean room at Lockheed Martin Space Systems, Denver. This configuration is how the spacecraft will look on the surface of Mars. (Image: NASA/JPL-Caltech/Lockheed Martin)

“The analysis of the radar data was critical in certifying the safety of our landing site,” explains Bruce Banerdt, principal investigator on the InSight mission atNASA’s Jet Propulsion Laboratory in Pasadena, Calif. “But buried rocks or layers could impede [the temperature instrument’s] progress. Radar is unique in its ability to probe beneath the surface, and give us some idea of what we might encounter.”

And for a side bonus, the detailed analysis of the surface characteristics of this otherwise unremarkable area of Mars provides avenues for other study, such as the formation of the planet’s regolith, or the crushed-up soil created through erosion and meteor impacts.

“This was a huge acquisition of data in the area, so we can definitely study some of the more fundamental processes of volcanic activity and regolith development that we might not have been able to do before,” Morgan adds.

The team’s results were published in the journal Space Science Reviews.