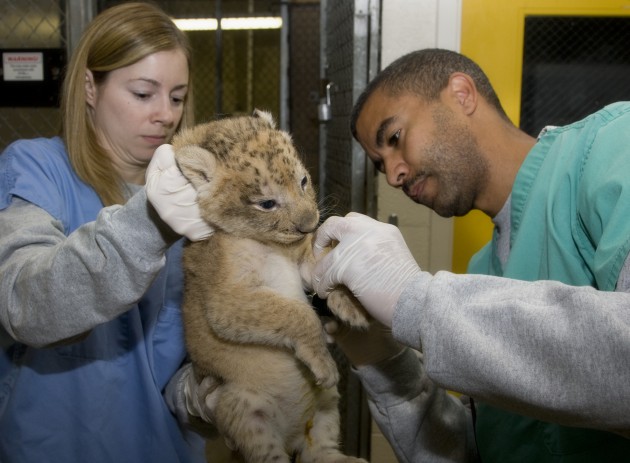 One of Nababiep’s cubs gets an exam from Zoo keepers Leigh Pitsko (left) and Craig Saffoe. (Photo by Mehgan Murphy)

The Smithsonian’s National Zoo recently welcomed two litters of lion cubs over a three-week period – bringing the total number of cubs to seven during the summer of 2010.
On September 22, the Zoo’s 6-year-old lion Nababiep gave birth to the three newest cubs three weeks after her sister, 5-year-old Shera, gave birth to four cubs.

Although the Zoo has managed lions in the past, it has been many years since it had the right combination of animals by age and gender to develop a pride. Doing so successfully has required extensive planning, knowledge of the species’ natural history and an understanding of the individual animals involved.

Luke, the Zoo’s 4-year-old male lion, is father to all seven cubs and is the most genetically valuable lion in the Association of Zoos and Aquariums’ Species Survival Plan for African lions (Panthera leo). An SSP matches individual animals across the country for breeding in order to maintain a healthy, genetically diverse and self-sustaining population.
“We are very proud to play a role in the management of this important species,” said Dennis Kelly, director of the Smithsonian’s National Zoological Park.–Jessica Porter