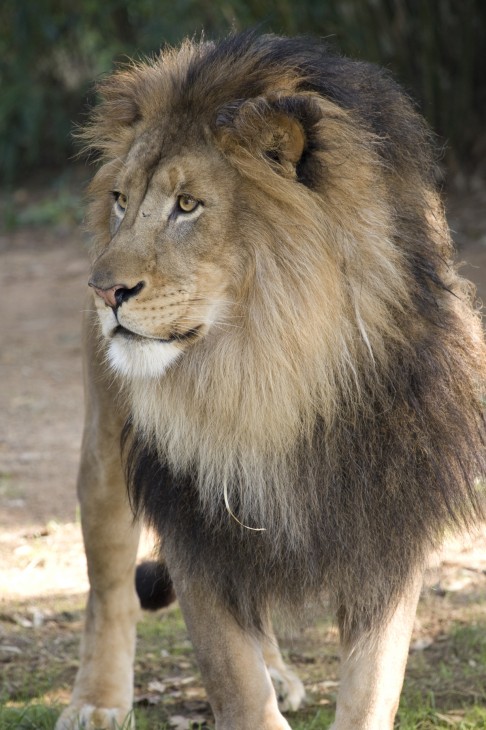 Male lion, Luke, spent more than a year interacting with females, Naba and Shera, through a mesh door before meeting them face-to-face. (Photo by Mehgan Murphy).

The ensemble of animal noises at the National Zoo will hopefully include the tiny roar of lion cubs this spring. The Zoo is attempting to build a breeding lion pride for the first time in more than 20 years, both to simulate more natural conditions for the most social of the great cats and to help improve knowledge for the captive management of African lions (Panthera leo).

“Because lions naturally live in social groups, introducing our lions into a common territory provides social enrichment,” said Rebecca Stites, a lion and tiger keeper at the National Zoo. “Providing appropriate and varied enrichment opportunities for our animals, including social enrichment, is just as important as ensuring that our animals have good medical care and proper nutrition.”

Although the National Zoo has managed lions in the past, it has been many years since it had the right combination of animals by age and gender to develop a pride. But doing so takes more than merely putting the Zoo’s current three African lions, Luke, Nababiep and Shera, together and hoping they get along and breed—it is a process that requires extensive planning, knowledge of the species’ natural history and an understanding of the individual animals involved.

“Animal keepers spend a considerable amount of time observing the behavior of individuals and getting to know their temperaments,” said Craig Saffoe, acting curator of lions and tigers. “Even though lions are a social species, introducing individuals who are not familiar with each other can be highly dangerous. Any of these animals can hurt or kill the other if we don’t do our job well.” 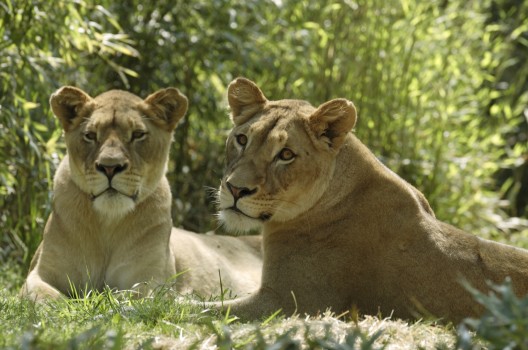 Sisters Naba and Shera have, so far, been successfully introduced to male, Luke, as part of the National Zoo’s attempt to build a lion pride. (Photo by Jessie Cohen)

The research and patience has paid off. The sisters, Nababiep and Shera, have spent short periods of time with the male, Luke, individually and simultaneously. This happened only after they each had spent more than a year sniffing Luke through a mesh door (called a “howdy door”), and keepers observed their reactions to determine how they might respond face-to-face. If they continue to get along indoors, they will be brought together in an outdoor enclosure later this spring. The keepers will continue to watch the animals carefully throughout the process and if they determine that the safety of the animals is at risk at any point, this process may take longer.

As part of these introductions, 4-year-old Luke and 6-year-old Naba have bred, though the Zoo will not be able to determine whether she is pregnant until the beginning of April. If Naba does not go into heat by then, keepers can presume she is pregnant and not experiencing a pseudo-pregnancy. Although 5-year-old Shera has not mated with Luke, the Zoo ultimately hopes that both females give birth to two to four cubs (the typical number in a litter), resulting in a pride of up to 11 lions.

The Zoo’s cat experts reached out to about a dozen other institutions to learn how they built their prides, and it will conduct its own research in the coming months to contribute to the North American Species Survival Program for African lions. Volunteers will help keepers observe how the lions spend their time, how close they stay to one another and what times of the day they engage in social play. They will also watch the lions’ breeding and territorial marking behaviors.

“These three lions were brought to the National Zoo specifically for the purpose of breeding and introducing new genes into the existing U.S. captive population,” said Kristen Clark, a lion and tiger keeper. “The public will have the unique opportunity to observe the social interactions of a real lion pride, learn how charismatic and crucial this species is and hopefully be engaged enough to support conserving this species in the wild for future generations.”

In the wild, a typical male becomes the resident male in a pride, which consists of related females and offspring, at the age of 4. Although females in a pride do more than 80 percent of the hunting, the social structure of a pride is more complex than researchers once thought. For example, in smaller prides, males may be more active in hunting. The formation of prides makes lions unique among the great cats, many of which are solitary animals. Hunting, disease and habitat loss have contributed to a decline in the population of African lions, which are considered a vulnerable species by the International Union for Conservation of Nature and Natural Resources.

To follow the National Zoo’s progress in building a lion pride, read the updates from the Zoo’s lion keepers. You can also check for updates on our Twitter feed and Facebook page.

Shera, a 5-year-old lioness at the National Zoological Park