Although the magnificent frigatebird may be the least likely animal on the Galapagos Islands to be unique to the area, it turns out the Galapagos population of this tropical seabird may be its own genetically distinct species warranting a new conservation status, according to a paper by researchers at the Smithsonian Conservation Biology Institute, the Smithsonian’s National Museum of Natural History and the University of Missouri-St. Louis published last week in the scientific journal Proceedings of the Royal Society B. 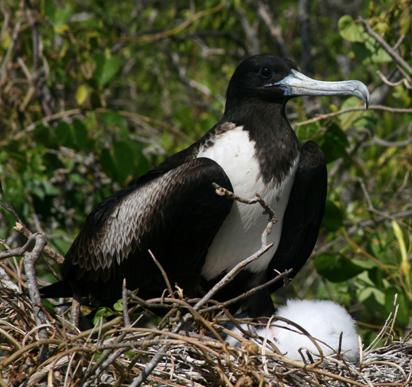 The Galapagos Islands, which once served as a scientific laboratory for Charles Darwin, boast a number of unique plant and animal species, from tortoises to iguanas to penguins. Magnificent frigatebirds, however, can fly hundreds of kilometers across open ocean, suggesting that their gene flow should be widespread and their genetic make-up should be identical to those of the magnificent frigatebirds on the mainland coast of the Americas. Even Darwin predicted that most Galapagos seabirds would not be very different from their mainland counterparts. But researchers at SCBI conducted three different kinds of genetics tests and all yielded the same result—the Galapagos seabirds have been genetically different from the magnificent frigatebirds elsewhere for more than half a million years.

“This was such a surprise,” said Frank Hailer, a postdoctoral research associate at SCBI and lead author of the paper. “It’s a great testimony to just how unique the fauna and flora of the Galapagos are. Even something that is so well-adapted to flying over open oceans is isolated there.”

Scientists began the research to determine whether the magnificent frigatebird on the Galapagos was more similar genetically to the magnificent frigatebirds on the Caribbean side or the Pacific side of the islands. Using frigatebird samples from Betty Anne Schreiber at the National Museum of Natural History, Iris Levin and Patricia Parker at the University of Missouri-St. Louis and those they collected in the field, SCBI researchers determined that the Galapagos version differ not only genetically, but also morphologically. 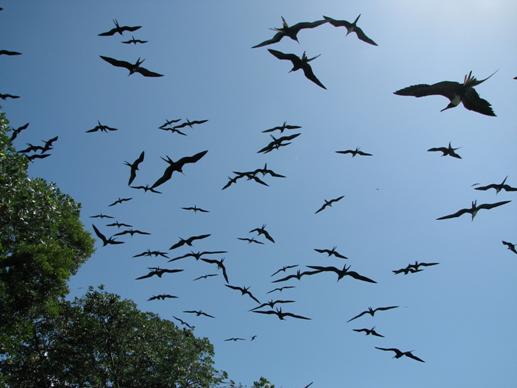 Now scientists are left with a number of questions: Are the genetics of the magnificent frigatebird on the Galapagos different enough to classify it as a distinct species? And what, exactly, accounts for the genetic and morphological differences when the seabirds can travel far and wide and therefore should not be isolated to one area to reproduce? SCBI and National Museum of Natural History researchers plan to collaborate with others in the field to find the answers.

“The magnificent frigatebirds on the Galapagos are a unique evolutionarily significant unit, and if the Galapagos population did go extinct, the area will not likely be recolonized rapidly by mainland birds,” said Robert Fleischer, head of SCBI’s Center for Conservation and Evolutionary Genetics and one of the paper’s co-authors. “This emphasizes the importance of protecting this small population of birds there.”

Magnificent frigatebirds are currently considered of least concern by the International Union for Conservation of Nature, but the Proceedings of the Royal Society B paper recommends that, because of the genetic uniqueness of those on the Galapagos, this status be revisited.