Scientists conducting deep-sea research in the Galapagos have described a new species of catshark, Bythaelurus giddingsi, in the March 5 issue of the journal Zootaxa. The new shark is approximately a foot long and has a chocolate-brown coloration with pale, irregularly distributed spots on its body. The spotted patterns appear to be unique to each individual.

The findings were published in the article “Description of a new species of deepwater catshark, Bythaelurus giddingsi sp. nov., from the Galapagos Islands (Chondrichthyes: Carcharhiniformes: Scyliorhinidae),” co-authored by John McCosker and Douglas Long of the California Academy of Sciences, and Carole Baldwin of the Smithsonian’s National Museum of Natural History, It appeared int Zootaxa 3221: 48-59. 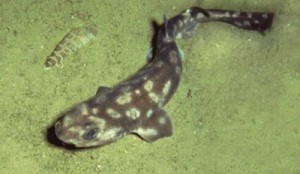 Image right: Bythaelurus giddingsi is a new species of deep-sea catshark from the Galapagos.

McCosker collected the first specimens of this new catshark while diving to depths of 1,400-1,900 feet aboard the Johnson Sea-Link submersible. “The discovery of a new shark species is always interesting, particularly at this time when sharks are facing such incredible human pressure,” said McCosker, lead author on the paper. “Many species have become locally rare and others verge on extinction due to their capture for shark-fin soup. The damage to food webs is dramatic, since sharks provide valuable ecological services as top-level predators—when they disappear, their niche is often filled by other species that further imbalance ecosystems. Most deepwater shark species are not very susceptible to overfishing; however, since this catshark’s range is restricted to the Galapagos, its population is likely limited in size, making it more susceptible than more widely distributed species.” 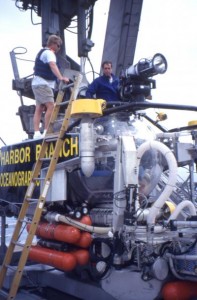 Image left: This photo shows John McCosker climbing into the Johnson Sea-Link submersible in the 1990s during a Galapagos expedition. (Photos California Academy of Sciences)

In the 1990s, McCosker and Baldwin made a series of dives inside the submersible Johnson Sea-Link to explore the marine life on the islands’ steep volcanic slopes and sandy bottoms. Submersibles allow scientists to explore a vast part of the Galapagos that was not accessible to Charles Darwin or earlier Academy scientists. It was during two such dives in 1995 and 1998 that the seven specimens used to describe B. giddingsi were collected.–Source: California Academy of Sciences