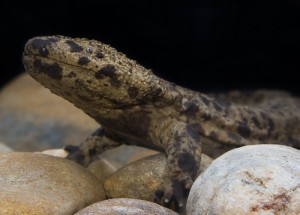 The Smithsonian’s National Zoo recently acquired Japanese giant salamanders given to the Zoo by the City of Hiroshima Asa Zoological Park. This donation will be the foundation of a new long-term breeding program in the United States and may play an important role in saving amphibians around the globe. “Our Japanese colleagues at the Asa Zoo have successfully applied decades of work and science to Japanese giant salamanders in the field and at their zoo,” said Dennis Kelly, director of the Smithsonian’s National Zoological Park. “It is an honor for the National Zoo to be entrusted with the offspring from their efforts, and we look forward to collaborating with them to save this magnificent species.”

Japanese giant salamanders live in cold, fast-flowing streams in Japan. Their numbers have been greatly reduced over the years because of agricultural development and habitat modification. 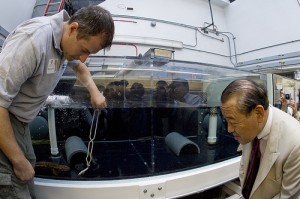 Photo left: Rick Quintero (left), the primary Japanese giant salamander keeper at the Smithsonian’s National Zoo, feeds the Zoo’s new juvenile salamanders for Japanese Ambassador Ichiro Fujisaki (right). Fujisaki was at the Zoo on July 22 to help celebrate the arrival of the salamanders, a gift from the City of Hiroshima Asa Zoological Park. (Mehgan Murphy photo)

“In conserving salamanders, we conserve the ecosystems in which they live,” said Ed Bronikowski, senior curator at the Zoo. “People share those same ecosystems, so what is good for the salamanders is good for many species, including us. We hope our visitors will learn from this generous gift to embrace our own diverse native salamander populations and protect healthy ecosystems for all.”

The National Zoo has experience caring for Japanese giant salamanders since as early as 1940, but with this gift, the Zoo hopes to become the first in the United States to successfully breed this species, which has not been bred outside of Japan in at least 100 years.

During the donation ceremony on July 22, kids from Great Falls Elementary School in Great Falls, Virginia were present to help name one male salamander. The students were asked to choice between two names selected by the ambassador – Hiro, derived from Hiroshima, the salamanders’ home in Japan and Asa, of the City of Hiroshima Asa Zoological Park. Hiro won the student’s vote! –Jessica Porter