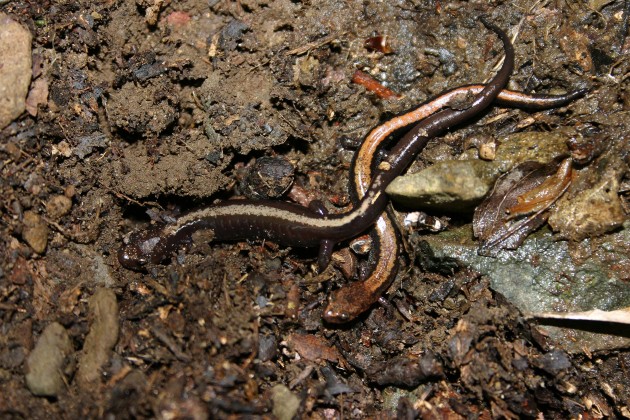 Photo: An endangered Shenandoah salamander, left, and a redback salamander, right in Shenandoah National Park. Competition between the two species is believed to confine the Shenandoah’s territory to just a few kilometers.

Each year thousands of vacationers enjoy the scenery along Virginia’s Skyline Drive, little knowing that for a few brief moments they are passing through the territory of an endangered holdout from the Pleistocene that few humans have ever seen—the Shenandoah salamander (Plethodon shenandoah). Steep rocky slopes on the north sides of just three mountains in Virginia’s Shenandoah National Park make up the scant range of this reclusive amphibian. To see one you’ve got to turn over a few rocks.

Its entire habitat is limited to just a few kilometers, a refuge surrounded by vast numbers of the more abundant redback salamander (Plethodon cinereus). How the Shenandoah salamander has managed to survive, and whether they can continue to do so, are questions that have drawn Jennifer Sevin, a biodiversity conservation specialist at the Smithsonian’s National Zoological Park, to the Virginia mountains.

Both Shenandoahs and redbacks are members of a group known as woodland salamanders. Air-breathers who lack lungs, they take in oxygen and expel carbon dioxide directly through their skin. Almost all woodland salamanders live under damp leaves, logs and rocks. At night and on rainy days they come out to prowl for mites, springtails, and similar small fare. 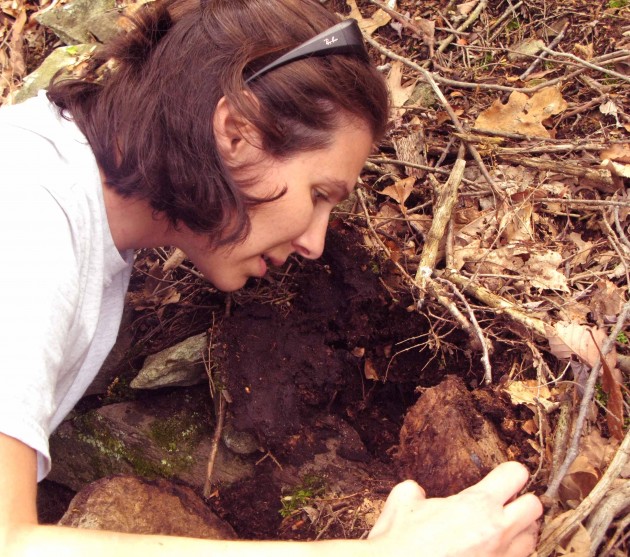 Once more widely distributed, the Shenandoah salamander likely retreated to its higher elevation habitat at the end of the Pleistocene (~10,000 years ago) as Earth’s climate warmed.  “Climate change is believed to have allowed the redbacks to expand,” Sevin says. Found in forests from Canada to North Carolina, redbacks also command the wooded areas of moist soil that surround the Shenandoah salamander’s talus patches. Competition between the two species may help confine Shenandoah salamanders to the rocky slopes.

Redbacks are not the only problem for Shenandoahs. Present-day climate change was ranked as the number-one threat to Appalachian salamanders by scientists attending a salamander conservation workshop last May at the National Zoo’s Conservation and Research Center, in Front Royal, Va.

In Shenandoah National Park, construction of the celebrated Skyline Drive in the 1930s may have further isolated Shenandoah salamanders, possibly cutting off gene flow between newly separated populations. Sevin has spent much of spring, summer, and fall the last two years scrambling over the talus slopes of Stony Man, Hawksbill, and the Pinnacles. She is collecting data that will shed light on the competition between salamanders on the three mountains. A nest she found last August containing one mother, six eggs and two hatchlings (the first Shenandoah salamander nest seen by any scientist) was a high point in an intensive project.

Sevin has repeatedly visited 124 study plots, each 32 by 2 meters, some in talus areas and others in less rocky habitat. In addition to measuring and weighing every salamander found, she and her team also note conditions such as air temperature, relative humidity, the amount of moisture on rocks and other objects and days since last rainfall. They also have collected information on each site’s dominant tree species, the amount of canopy cover, the depth of leaf litter, the distance from roads or trails, and the kind of talus present. 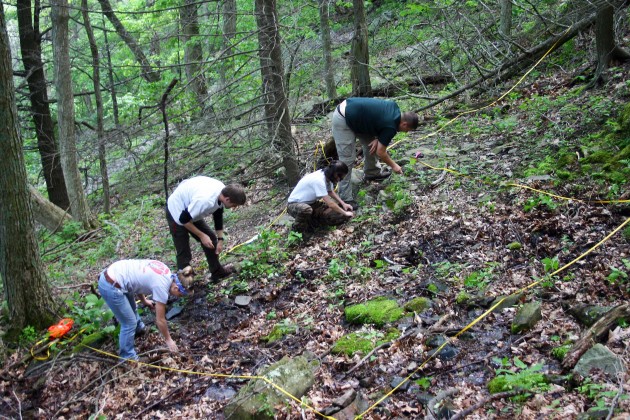 Photo: Researchers from the National Zoo take a census of Shenandoah salamanders in the Shenandoah National Park. Global Positioning System coordinates are used to pinpoint the rough boundaries of the salamander’s territory. (Photos by John Barrat)

In addition to the DNA work and pending permission from the U.S. Fish and Wildlife Service, Sevin hopes to capture approximately 30 Shenandoahs for experiments that will be conducted in climate-controlled rooms in the basement of the Zoo’s Conservation Biology Building. National Zoo biologists want to investigate how climate change might affect the species’ use of habitat, feeding success and even its competition with redback salamanders. Brian Gratwicke, a biologist who leads the National Zoo’s Amphibian Conservation Program, also will attempt to breed Shenandoah salamanders in captivity, something never done before.

Salamanders merit attention “simply for existence value,” Gratwicke insists. “They are important because they existed in this part of the world a long time before we ever got here, and they’re beautiful, amazing creatures.” Reason enough, he believes, to try and help them stick around a few more million years.