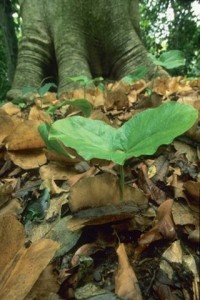 Home to jaguars, harpy eagles and red-eyed tree frogs, tropical forests support some of the rarest species on the planet and are the most biodiverse ecosystems on land. Understanding why some species are common while others are exceedingly rare has been a challenge in these mega-diverse forests. New results from a massive study at the Smithsonian Tropical Research Institute show that interactions among community members play an important role in determining which organisms thrive.

“Based on information about the survival of more than 30,000 seedlings of 180 species of tropical trees, we found that seedlings of rare species are much more sensitive to the presence of neighbors of their own species than seedlings of common species are,” said Liza Comita, the primary author on the study and now a postdoctoral fellow at the U.S. National Center for Ecological Analysis and Synthesis. “Not only does this tell us where to look for the mechanisms that explain why certain species are rare, but it also provides potential clues about how to conserve rare species that are most vulnerable to extinction.” 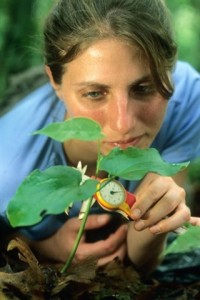 The lowland tropical forest on Panama’s Barro Colorado Island is the site of a huge long-term study focusing on plant diversity: more than 400,000 individual trees and shrubs of more than 300 species have been marked, mapped and measured every five years for the past 30 years. A unique window on climate change and other large-scale processes, the experiment was originally set up because two ecologists, Robin Foster, now at Chicago’s Field Museum, and Stephen Hubbell at UCLA, a co-author on this paper, had an argument about how life organizes itself.

What determines the members of a community? The study site—a patch of forest the size of nearly 100 football fields—is large enough to include individuals of many rare species that would not be present in smaller studies. After realizing that many of the processes that shape diversity happen early in a tree’s life, researchers decided to expand the study to include an annual survey of seedlings growing in the forest understory. This study of seedlings, led by Comita, Hubbell and Panamanian botanist and co-author Salomón Aguilar, has now been going for nearly a decade and has yielded new insights into this diverse forest.

“It became clear with this seedling survival survey that even though neighbors can be shaded out by individuals of the same or of other species, there are real differences in the survival of different species depending on how many of their neighbors are the same species,” said Helene Muller-Landau, staff scientist at the Smithsonian and adjunct professor at the University of Minnesota. “Some of our colleagues are working on the specific mechanisms that explain these differences, and we look forward to seeing their results, which will be published soon.” –Beth King