Killing of methane-producing megafauna may have caused cooling 13,000 years ago

The mechanisms for global warming are relatively well understood, but what does it take to cool the planet? According to new research, a taste for large game by the prehistoric inhabitants of the Americas may have caused the Earth to cool some 13,000 years ago. 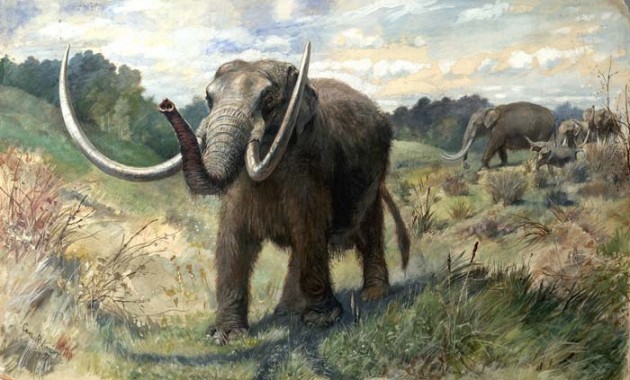 As reported in the June issue of the journal Nature Geoscience, ancient settlers to North and South America may have significantly reduced atmospheric levels of methane – a much more problematic greenhouse gas than carbon dioxide – by relentlessly hunting large herbivores of their day. “This may be the first measurable impact of humans on the greater environment,” says S. Kathleen Lyons, co-author and researcher in paleobiology at the Smithsonian’s National Museum of Natural History. 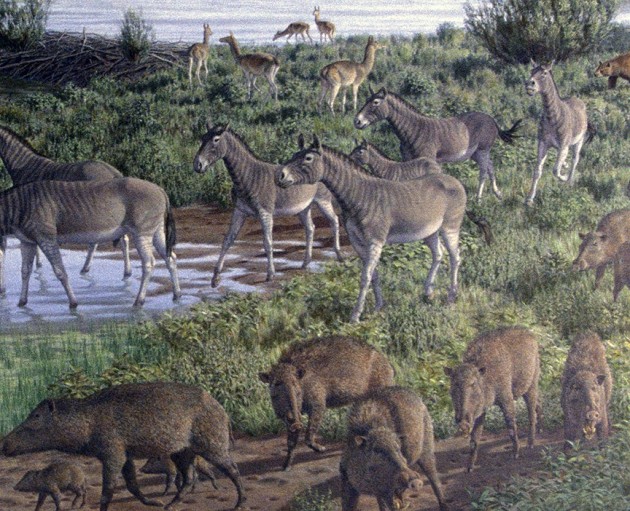 New world megafauna such as mammoths, bison and camelids that were alive at the end of the Pleistocene epoch (some 13,000 years ago) would have produced massive amounts of methane-rich flatulence and belching, thanks to the cellulose-digesting microbes in their guts. Human hunting activities likely made a sizable dent–anywhere from 12.5 to 100  percent–in the level of atmospheric methane at that time. As a result, a cooling in transregional temperatures of the Younger Dryas period may be attributable in part to the rapid eradication of some 100 herbivorous species.

“The timing of the extinction aligns perfectly with the arrival of humans in the Americas,” Lyons says, “and their hunting may have contributed to this famous cool-down.” A drop of 9 to 12 degrees Celsius is believed to have occurred within the Younger Dryas stadial, or the “Big Freeze,” which came between the Pleistocene and Holocene epochs. 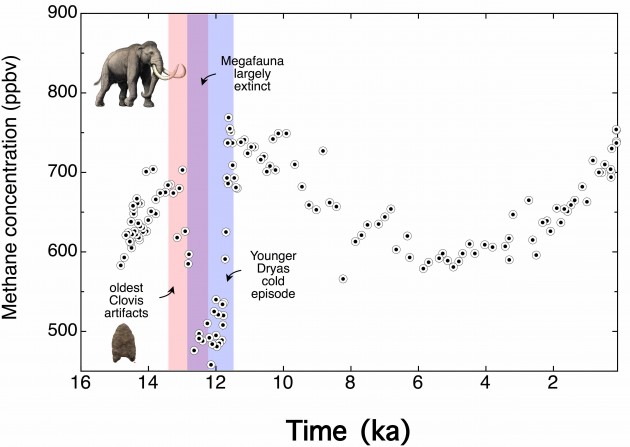 The extinction of megafauna (indicated by red shaded region) closely coincides with an abrupt drop in atmospheric methane concentration at the onset of the Younger Dryas (indicated by blue shaded region). Time is given in kiloannum. Scientists estimate that prior to the extinction event, large-bodied herbivores in the Americas released about 9.6 Tg of methane to the atmosphere annually. The loss of these species could be responsible for 12.5 to 100% of the overall methane decline. Atmospheric methane concentrations during the past 15,000 years are derived from the Greenland ice core samples.

Ice core samples and fossil and archaeological records, combined with body mass and gut size calculations of these ancient animals, informed the methane estimates derived by the authors.

The research team, which was led by Felisa A. Smith of the University of New Mexico, and assisted by Scott M. Elliott of Los Alamos National Laboratory and Lyons, also found the Intergovernmental Panel on Climate Change is likely undervaluing the amount of methane emitted by non-domesticated animals.

As a result of their findings, the authors propose that the beginning of the ‘Anthropocene’ be recalibrated to 13,400 years ago instead of 8,000 years ago when ancient farmers are known to have cleared forests to grow crops.