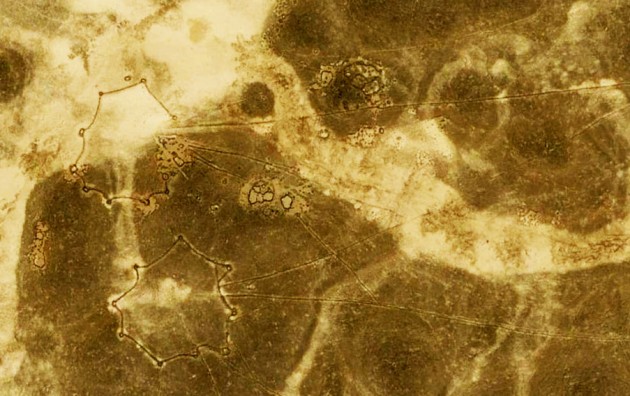 This aerial image of two kites in the desert of Syria shows the long V-shaped structure into which gazelles were herded by hunters. The animals ended up inside the circular stone enclosure at the end of the V, where they were killed. The name “kites” comes from the appearance of these structures when viewed from the air. Click to enlarge. (Image: Google Maps)

A remarkable 5,000-year-old deposit of bones representing an entire herd of Persian gazelles recently discovered in northeastern Syria is firm evidence, scientists say, of an ancient hunting practice largely responsible for the near extinction of gazelles in this region today. Discovered at Tell Kuran in Syria’s Khabur River Basin, the bones are from at least 93 different gazelles, of both sexes and of a range of ages, and bear marks from knives used to butcher and skin the animals. The discovery was announced in the April 18 issue of the Proceedings of the National Academy of Sciences by Guy Bar-Oz of the University of Haifa; Melinda Zeder of the Smithsonian’s National Museum of Natural History, and Frank Hole of Yale University. 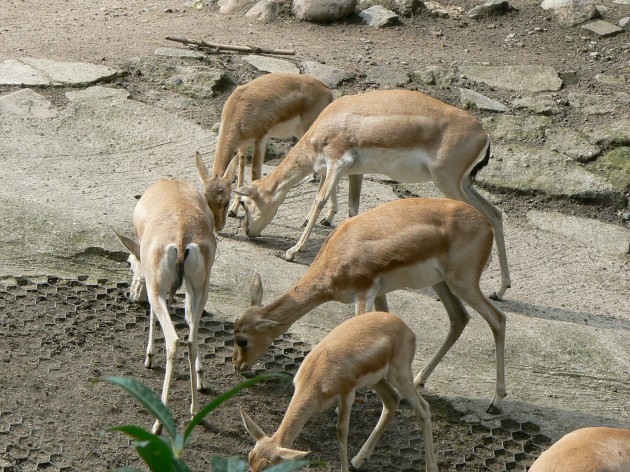 A group of Persian gazelles in the Hamburg Zoo, Germany.

The mass of bones is located near a number of ancient human-built stonewall enclosures known as “kites,” structures into which animals were driven and killed by hunters. Many kites dot the landscape in the Syrian Desert along what is presumed to be the former migration route of the gazelles. Use of these kites was common and widespread in the region from 4,000 to 1,000 B.C. Until now, how kites were used and which animals they were used to capture was open to some speculation, as no animal remains had been found in direct association with the kites.

The bone deposit consists almost entirely of the lower, non-meaty feet of the gazelles, indicating the animals were systematically skinned and dismembered at the site and the meatier sections were transported elsewhere for distribution. The shallowness and compactness of the bone deposit indicates a single butchery episode, the scientists say. 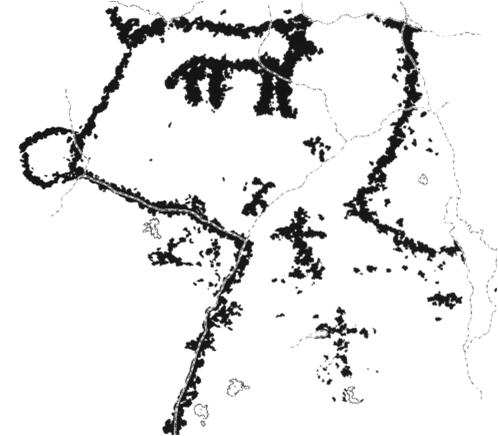 This rock art image from the Jamma Plateau shows a gazelle inside a kite with a hunter blocking its escape.

Use of kites for the mass harvesting of gazelles and other desert ungulates arose well after people in the region began keeping domestic livestock for food, the scientists point out. Gazelle meat was only a supplementary source of protein for the hunters during this time. “This indiscriminate hunting strategy sets it apart from the more targeted and sustainable practices of earlier periods, when wild animals were the major or sole source of animal protein,” the scientists write.

Rock art discovered near some kites depict these stone traps being used to hunt Persian gazelles. Such graphics found near the Tell Kuran deposit “indicates that the capture of these animals played an important social role that was imbued with religious overtones,” the scientists write. “The hunting and processing of these animals (and possibly other game, such as onager) required the coordination of numerous people responsible for building and maintaining kites, driving and killing animals, and transporting them back to habitations sites like Tell Kuran for butchery.”

“Unlike earlier hunting practices that targeting individual animals, we propose that mass-kill strategies using kites resulted in the decimation of whole breeding populations of gazelle, preventing a rebound of their numbers,” Zeder says.  “More importantly, these practices would have disrupted the overall migratory pattern of these animals leading to the fragmentation of their large migratory populations” the scientists write. In essence, the use of the kites some 5,000 years ago marked the beginning of the end for the Persian gazelle. Modern firearms and habitat loss in the 20th century represents a final coup de grâce for these animals.

The article “Role of mass-kill hunting strategies in the extirpation of Persian gazelles (Gazella subgutturosa) in the northern Levant,” is available online at www.pnas.org.