When it comes to attracting a mate, flowers and sweets often do the trick—even for one of the world’s smallest birds—the purple throated carib, a hummingbird species native to the mountainous islands of the Eastern Caribbean. Scientists recently discovered that it is in the best interest of male purple-throated caribs to defend and maintain a territory with a high density of nectar-producing flowers. Why? Because it is the quality of this territory—rather than flashy plumage or elaborate courtship displays—that attracts the most females.

John Kress, a botanist at the Smithsonian’s National Museum of Natural History, and Ethan Temeles, an ornithologist and biology professor at Amherst College in Massachusetts, have spent several years researching purple throated caribs (Eulampis jugularis) in the wild on the island of Dominica. What they observed was unique among all bird species: successful male caribs maintained and defended territories with nectar supplies that were two to five times greater than their daily needs and also isolated part of their crop for the exclusive feeding rights of visiting females. The key to this female-only feeding area was the presence of heliconia flowers.

“This is the first time such behavior has ever been observed in a bird species,” said Kress. “Not only is the male defending a huge territory from competing males, but he’s also defending a big chunk of it exclusively for females who he is trying to attract as potential mates. He is farming the nectar for these dual purposes.” 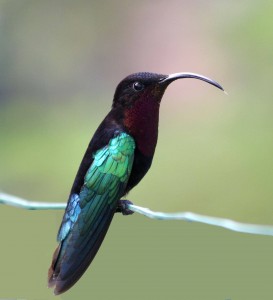 Male and female purple throated caribs are alike in plumage, but males are considerably larger and have longer wings than females. Females, however, have bills that are 20 percent longer and 30 percent more curved than the bills of the males, meaning that they are physically able to feed from flowers that males cannot. This is also known as “sexual resource partitioning” and for the purple throated carib it applies to two species of Heliconia, a primarily neotropical genus of plants. Male caribs feed from the Caribbean heliconia (Heliconia caribaea), while females feed primarily from the lobster claw heliconia (Heliconia bihai).

This close correspondence between the physical traits of the two different heliconia flowers and the bill morphology of each sex of purple-throated carib strongly suggests that the process of coevolution (the evolution of two or more species that interact closely with one another, with each species adapting to changes in the other) is the cause of this fit between the birds and the flowers. Furthermore, this process is strongly reinforced by the fact that the different energy requirements of the male and female carib are uniquely matched by the energy rewards in the nectar of their respective heliconia flowers.

The scientists report that a female’s choice of a male depends on the nectar supplies within his territory, which in turn depended on his prevention of nectar losses to competing male purple-throated caribs and other nectar feeding intruders.

The male’s reward for spending the time and energy in defending his territory was, of course, the attraction of potential mates. Temeles and Kress observed that the rates of female intrusions to feed on defended territories were highest in late morning and early afternoon, at times when the amount of nectar in undefended plants was lowest.  “Once the females are in the territories they are allowed to “sip from the male’s wine cellar.” If she likes what she is sampling, then mating takes place,” Temeles said.

Kress and Temeles plan to extend their studies to other islands in the Eastern Caribbean to test how this plant-pollinator system has evolved in different regions and in different ecosystems.