A new study published in the Feb. 2 issue of the Proceedings of the National Academy of Sciences indicates that forests in the Eastern United States are growing at a faster rate than at any time in the last 225 years. The chief culprit, researchers say, appears to be climate change, specifically:  rising levels of atmospheric CO2, higher temperatures and longer growing seasons. 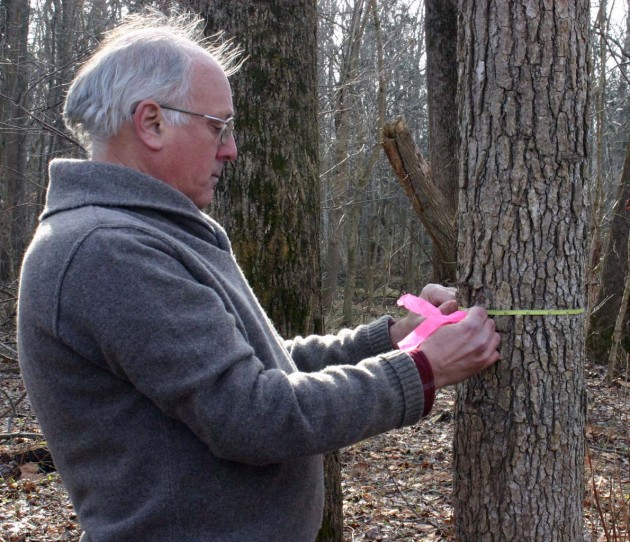 Smithsonian forest ecologist Geoffrey Parker began his tree censuses his first day on the job, Sept. 8, 1987. Here he measures a tree on the grounds of the Smithsonian Environmental Research Center. (Photo by Kirsten Bauer)

The study, conducted by Geoffrey Parker, a forest ecologist at the Smithsonian Environmental Research Center in Edgewater, Md., and Sean McMahon, a postdoctoral fellow at the Smithsonian Tropical Research Institute, utilizes data collected for more than 20 years by Parker from stands of mixed hardwood forest plots in Maryland. Data has revealed that the forests are adding an additional 2 tons per acre annually.

Forests and their soils store the majority of the Earth’s terrestrial carbon. Small changes in the growth rate of the forest scientists believe, can have a significant impact on weather patterns, nutrient cycles, climate change and biodiversity.

In forest plots at SERC, Parker has meticulously tracked the growth of trees 5 to 225 years old. Data show that more than 90% of the stands grew two to four times faster than predicted from the baseline data. 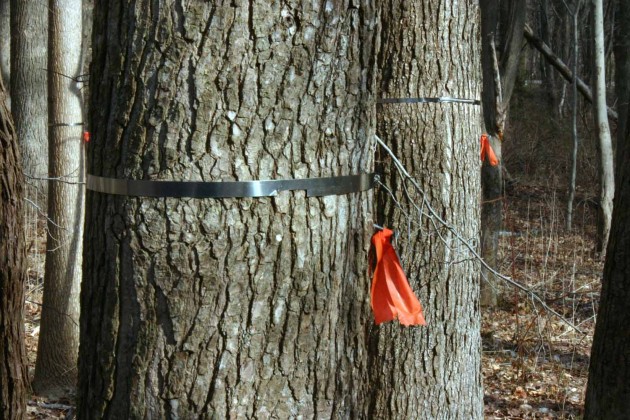 Jess Parker, his colleagues and a team of citizen scientists have tagged more than 20,000 trees at the Smithsonian Environmental Research Center. These metal bands expand as the diameter of the tree increases, recording its growth. (Photo by Kirsten Bauer)

By grouping the forest stands by age, McMahon and Parker were also able to determine that the faster growth is a recent phenomenon. If the forest stands under study had been growing this quickly their entire lives, the stands would be much larger than they presently are.

Parker began his tree census work Sept. 8, 1987—his first day on the job at the Smithsonian. He recorded and tracked trees 2 centimeters or more in diameter, identifing them to species and marking each tree’s exact coordinates on a map.

By knowing its species and diameter, McMahon, who specializes in data-analysis and forest ecology, is able to calculate the biomass of a tree. “Walking in the woods helps, but so does looking at the numbers,” he says. 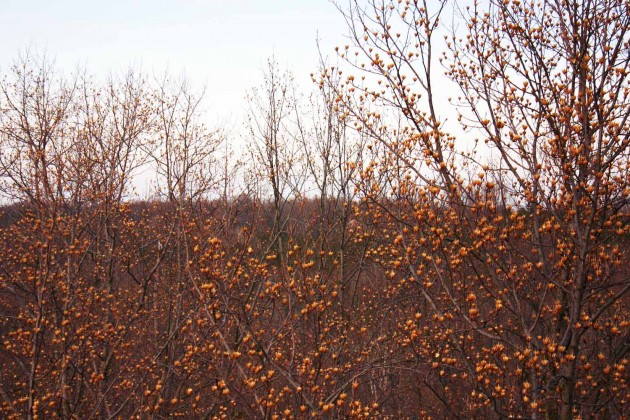 The tulip poplar, shown here, is a common tree in the temperate forests surrounding the Smithsonian Environmental Research Center.  Other species include sweetgum, American beech, and southern red oak. (Photo by Kirsten Bauer)

“We made a list of reasons these forests could be growing faster and then ruled half of them out,” Parker says. The reasons that remained included increased temperature, a longer growing season and increased levels of atmospheric CO2.

During the past 22 years CO2 levels at SERC have risen 12%, the mean temperature has increased by nearly three-tenths of a degree and the growing season has lengthened by 7.8 days. The trees now have more CO2 and an extra week to put on weight. Parker and McMahon suggest that a combination of these factors has caused the forest’s accelerated biomass gain.

The findings are also important for policymakers trying to address climate change. Future carbon cap-and-trade rules will need to quantify the amount of carbon forests hold. If faster growth rates prove the norm, this could affect the formulas and the dollar value assigned to forests that are cut or conserved.

Parker and McMahon don’t expect SERC’s forest to continue growing at this accelerated rate forever. Some day the growth rate will level off. When that happens, they wonder how that will affect carbon dioxide levels. If trees are sponges that absorb CO2, what will happen to CO2 levels in our atmosphere when the trees become saturated? It’s a question for further exploration. In the meantime, Parker will continue walking through the SERC woods, tape measure in hand, carefully tracking the growth of the trees.  —Tina Tennessen