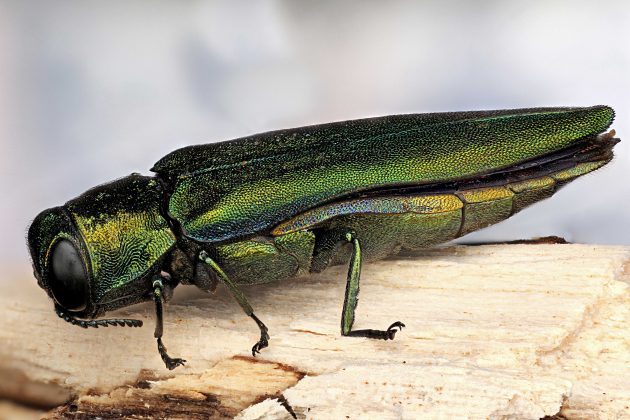 A tiny invasive insect from Asia might have an effect on Chesapeake Bay waters.

The emerald ash borer is killing millions of ash trees in the Northern and Eastern U.S., and in Maryland its destruction may cause increased levels of sediment and pollutants to flow into the Chesapeake Bay, says Smithsonian scientist Goeffrey Parker. In addition, the damage done by the insect may cause temperatures in streams that flow into the Chesapeake to rise and their water oxygen levels to drop. Parker is a forest scientist at the Smithsonian Environmental Research Center in Edgewater, Md.

Larvae of the emerald ash borer penetrate the bark of a tree and eat away the cambium layer responsible for the flow of water and nutrients up and down the trunk. Essentially the tree is girdled and quickly dies. The emerald ash borer recently spread to the Chesapeake Bay area of Maryland. “Basically we’re watching a train wreck. I think the ash trees here will all be gone in three to four years, maybe less,” Parker says.

Ash is an important tree species in Maryland because it prefers wet areas—stream sides and swampy, damp areas. Ash predominate in riparian zones that form a border between agricultural land, human development and streams and rivers. Riparian zones are critical because they’re in a position to absorb pollution from farms and cities before it reaches the Chesapeake Bay. 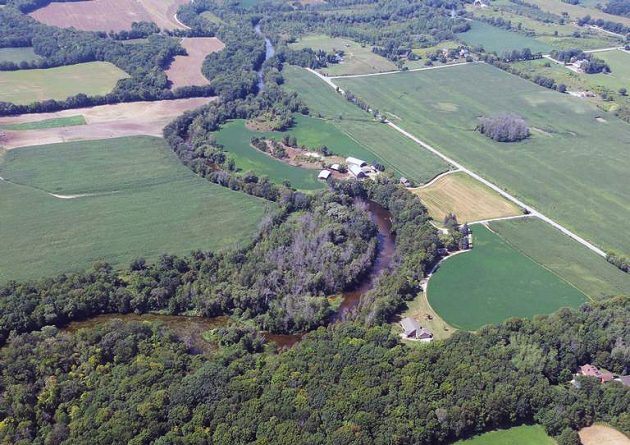 This aerial photo shows ash trees next to a stream in Newburg, Wis., that were killed in 2013 by the emerald ash borer. Ash thrive in wet areas. (Photo by Bill McNee, Wisconsin Department of Natural Resources, Bugwood.org)

“Even though riparian forests are a small part of the landscape around here, they are really important for controlling nutrients and sediments that get into the streams and into the bay—nitrogen and phosphorus and particulate matter. They are a big deal when it comes to the Chesapeake Bay,” Parker says.

As the ash trees in Maryland and bordering states die off, the nutrient absorbing and sediment filtering effectiveness of the state’s riparian zones will most likely weaken, permitting more nutrients and sediment into the Chesapeake.

Still, exactly how much the disappearance of ash trees could impact these zone’s ability to block pollution is unclear. “The effect of ash loss on nutrient and sediment delivery to the Bay is my conjecture,” Parker says. “Ash isn’t the only species growing in stream-side forests, so it is hard to know if their loss will affect any changes. It may be difficult to measure.” Other common riparian species include sycamore, elm, and river birch. 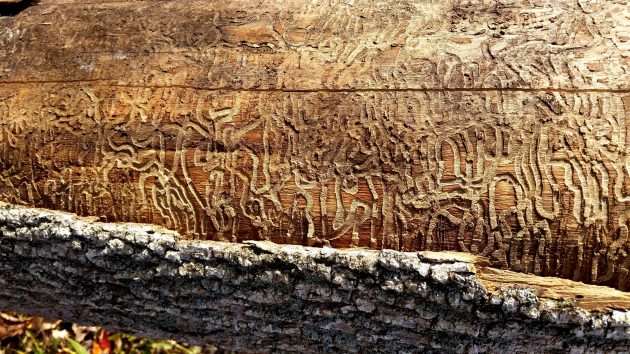 Larvae of the emerald ash borer destroy the cambium layer between the inner bark and the wood of an ash tree, stopping the flow of its sap and killing the tree. These are the distinctive trails it leaves. (Flickr photo by Anna Hesser)

According to Parker, in the 1970s the staff of the Smithsonian Environmental Research Center conducted some of the earliest studies on the capacity of riparian forests to absorb agricultural nitrogen in groundwater before it spread into streams and rivers. “It was a revelation at the time,” Parker recalls. “The study was replicated at other institutions and now the value of riparian forests has been memorialized into laws. You can’t cut them down in many states.” 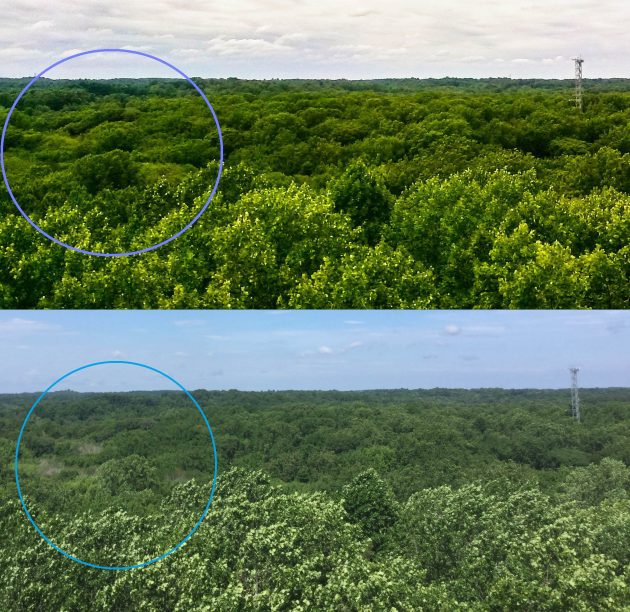 The top image in this double photograph of the canopy of the 40-acre forest plot on the grounds of the Smithsonian Environmental Research Center was taken in August 2016. The bottom image, showing a number of dead or dying ash trees (circle), was taken June 19, 2017. (Photos by Jessica Shue)

Parker and SERC botanist Jessica Shue are responsible for conducting long-term monitoring of a 40-acre forest plot on the grounds of SERC. The plot is a part of the Smithsonian’s Forest Global Earth Observatory network, a program that tracks forest dynamics in plots the world over. Beginning in 2007, SERC staff measured all woody plants in the forest with a diameter at breast height of 1 centimeter or greater, mapped their location, identified them to species, and began assessing their condition every five years. Both green ash (Fraxinus pennsylvanica) and white ash (Fraxinus americana) grow in the plot.

“During a 2014 survey we did not see signs of emerald ash borer,” Shue says. “Last summer in 2016, I went out and surveyed every ash tree in our plot and I saw crown thinning, dieback and the D-shaped emergence holes of the emerald ash borer.” Trees that looked healthy in 2014, were almost completely defoliated in 2016, Shue says. “When I re-survey this summer I expect many will be completely dead.” 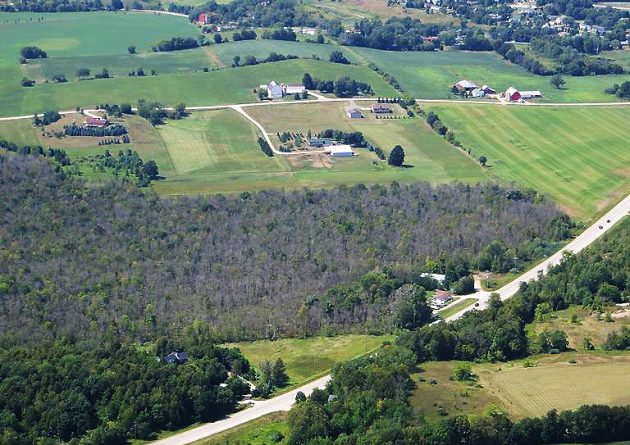 A stand of ash trees in Newburg, Wis., that was killed by the emerald ash borer. (Photo by Bill McNee, Wisconsin Department of Natural Resources, Bugwood.org)

Many unknowns remain in regard to the overall impact the emerald ash borer will have on Eastern forests, both Parker and Shue say. In the Smithsonian study plot, “We don’t manipulate what’s going on. We watch it happen,” Parker says. “After the ash is gone a lot of canopy space is going to be open. What happens then? We will be able to see what tree species take advantage of the demise of the ash. This may be horrible to watch, but it is not unprecedented in forest ecology.”