From the Bay of Bengal, a dinoflagellate makes its way to the Smithsonian

By Tina Tennessen for sercblog.si.edu

It’s a rare event when Smithsonian phytoplankton taxonomist Sharyn Hedrick sees something new. Hedrick, who works at the Smithsonian Environmental Research Center on the Chesapeake Bay, has observed and photographed hundreds of species of dinoflagellates, diatoms, algae and the like. Phytoplankton are the microscopic organisms that float in the ocean’s photic zone where they can photosynthesize and become a source of food for other creatures in the food web.

It’s not an exaggeration to say Hedrick was ecstatic when she peered into her inverted phase contrast microscope and found Amphisolenia quadrispina floating in her sample. “For 20 years I’ve been hoping to see something like this,” she says. A. quadrispina has a unique long, thin shape that resembles a stick, more than it does other dinoflagellates. It’s huge too — between 600 to 700 microns, which is still smaller than the tip of a needle, but large by phytoplankton standards. 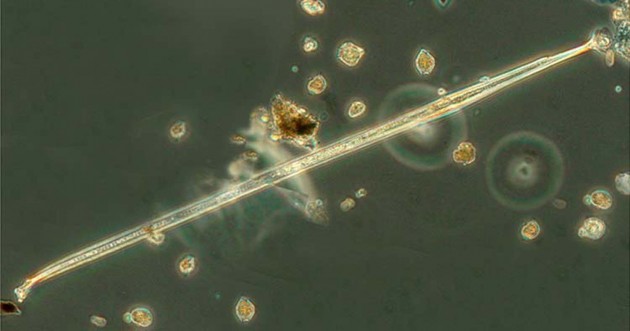 The dinoflagellate Amphisolenia quadrispina from the Bay of Bengal (Credit: Sharyn Hedrick and Charles Gallegos).

The dinoflagellate came to Hedrick in a shipment of samples collected in off India’s South Andaman Islands in the Bay of Bengal. Hedrick has photographed and identified samples from around the world: Asia, the Middle East, Antarctica and North America. She is adding a photo of A. quadrispina to her online Phytoplankton Guide, a source for students and fellow-researchers working with phytoplankton.

“This is a most unusual species of dinoflagellate,” Hedrik says. “Its body is very elongated. The base of the cell has four spinules. They look like little feet or stalks. The neck expands to two collars with the end of the cell protruding through the collars. This is a tropical and subtropical species in both the Atlantic and Pacific oceans, the Mediterranean and the Indian Ocean.”