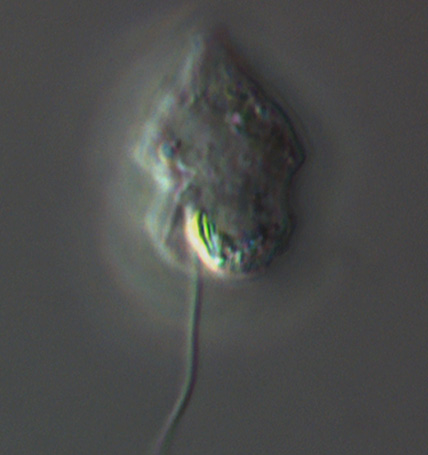 In the microscopic world of marine protists, many species drift in the ocean currents unstudied and nameless. This is no longer the case for the parasitic dinoflagellate Tintinnophagus acutus. SERC plankton ecologist Wayne Coats recently finished an extensive description of the organism and thus earned naming rights.

Of the approximately 2,000 known species of living dinoflagellates, about 150 are parasitic. These organisms can alter the marine food web, in some cases destroying prey that consumers like copepods and larval fish rely upon. Coats first spotted T. acutus in the 1980s, in plankton samples he had collected from the Chesapeake Bay. Through his microscope, he noticed a ciliate being edged out of its lorica (shell) by a dinoflagellate. It looked different from others he had observed.

Describing a species is a serious undertaking. In the case of T. acutus, Coats and his collaborators documented its microscopic life cycle, conducted extensive DNA analysis and unearthed scientific papers dating back to 1873—when parasitic dinoflagellates were first noted by German scientist Ernst Haeckel.

Much of Coats’ work involved understanding, questioning and clarifying various accounts of similar dinoflagellates that have been written over the years. He read studies published in French, German and English. This thorough research resulted in more than the introduction of T. acutus: it provided new understanding of the evolutionary relationships among parasitic dinoflagellates and it better defined their position within the dinoflagellate lineage of the tree of life.

Protist phylogeny has never been Coats’ primary focus. T. acutus is the second species that he has named and described. This fall Coats will retire from SERC; he says he expects to have time to describe a few more species of parasitic dinoflagellates.