Few people give much thought to the tiny crustaceans, clams, worms and other organisms that live in the darkness and muck at the bottom of the Chesapeake Bay. Yet these primitive, bottom-dwelling creatures are food to many larger Bay animals, such as blue crabs and fish, including spot, croaker and flounder.

Now, a recent survey of the bottom-dwelling animals of the Chesapeake has revealed that communities of even these relatively hardy organisms are under stress. The study, published in the Journal of Experimental Marine Biology and Ecology by scientists from the Virginia Institute of Marine Science, The Smithsonian Environmental Research Center, Old Dominion University, and Versar Corp., has revealed that many regions of the bay are becoming  inhospitable to bottom-dwelling animals because of a lack of oxygen—a condition known as “hypoxia.” 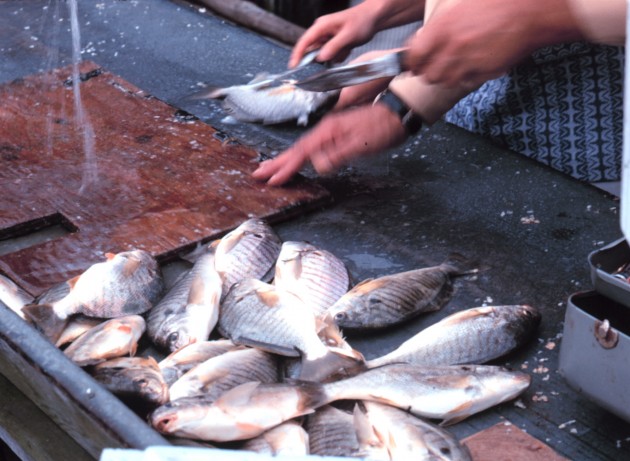 A fisherman cleans his catch of spot, one of the fish species in the Chesapeake Bay that rely upon bottom-dwelling organisms for food.

The cause, explains biologist Rochelle Seitz of the Virginia Institute of Marine Science, is the massive algae blooms that occur each spring in the Bay brought on by the high nutrient levels—primarily fertilizer runoff—in the water.  The algae die, sink to the bottom, and are consumed by bacteria, a process which uses up the oxygen at the lower depths of the bay.  In summer, the cool deep water is trapped under a layer of warm surface water and little mixing occurs between layers. As a result, little new oxygen is introduced to the lower depths and the animals that live at the bottom of the Bay suffocate and die.

Using cores to sample organisms from hundreds of spots each year at various depths throughout the Chesapeake Bay, the researchers targeted all creatures living from the top of the sediment down to 7 to 10 centimeters. Samples were taken from shallow tidal freshwater regions of the Bay to the deep main channel. For each sample the water’s depth, temperature, salinity, oxygen levels and other conditions were recorded. 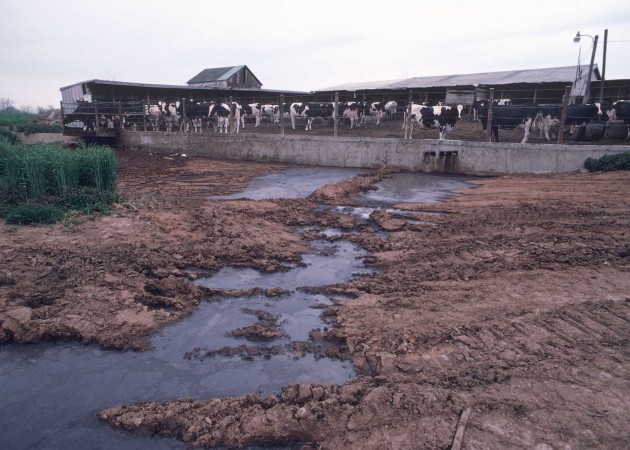 Nutrients from agricultural runoff are partially responsible for causing the algae blooms in the Chesapeake Bay which result in hypoxia in certain benthic areas of the Bay.

“The number of bottom dwelling organisms is substantial until the oxygen level in the water drops to 4 milligrams per liter,” Seitz says.  In addition to counting the different species in each sample, the researchers also measured the accumulated weight, or biomass, of all of the organisms in each sample. “We found that both the abundance and diversity of animals living on the bottom of the Bay are being reduced,” Seitz says. “Since 2003, we have found lower levels of diversity of deep water species than in the preceding years, and 2007 had the lowest Bay-wide benthic diversity in the Chesapeake Bay Program’s monitoring record.”

“While having fewer worms on the bottom of the Chesapeake Bay might seem unimportant, fewer worms means less food available for animals people do think are important, such as blue crabs and flounder,” explains William Long, a research associate at the Smithsonian Environmental Research Center and a co-author of the study. “Hypoxia can turn a lush, healthy community teeming with life into a wasteland of sulfide-smelling ooze where nothing but bacteria can grow. That’s not good, not for the worms, not for the crabs and certainly not for all the people who enjoy or make their living on the Bay.”  —John Barrat