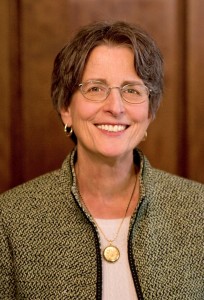 “We are proud to welcome Dr. Pell to the Smithsonian as our new Under Secretary for Science,” said Secretary Clough. “She is an accomplished scientist, experienced leader and inspired educator who will help us raise the global profile of Smithsonian science. We will benefit greatly from her many talents.”

“Anyone who comes to Washington, D.C., finds him or herself touched by Smithsonian activities, as the Institution is at the nexus between discovery and education,” said Pell. “I am excited and humbled by the opportunity presented to me by Secretary Clough and am looking forward to the possibilities to expand the reach and dimensions of Smithsonian science.”

Pell, 61, brings an environmental science background to this position and a strong track record of leadership. She was a professor in the department of plant pathology at Penn State for more than 35 years.

The entire news release announcing the new Under Secretary for Science is available on the Smithsonian’s news room site.