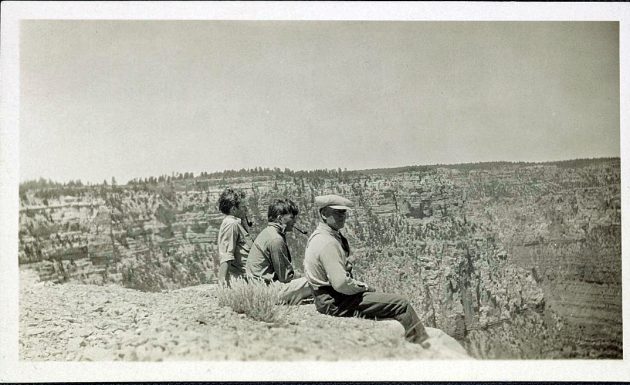 Photograph of Jackson, Sande, and LeRoy Pollock at the Grand Canyon in 1927. From Jackson Pollock and Lee Krasner papers, circa 1905-1984, Smithsonian’s Archives of American Art.

The first mental image of Jackson Pollock is often of a balding middle-aged artist, back bent with cigarette dangling while flinging chaotic swirls of paint onto a large canvas laid on the floor.

But another picture reveals a very different scene, a 1927 family photo showing Pollock as a teenager with a pipe in his mouth sitting with his father and brother at the edge of the Grand Canyon. The quiet family moment speaks to Pollock’s upbringing in Arizona and his father’s work as a road surveyor before Pollock moved to New York and became a superstar artist known both for his personal travails and his groundbreaking Abstract Expressionist paintings. 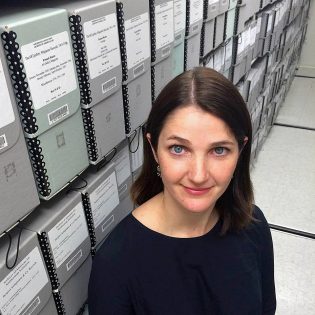 “Many people don’t know Jackson Pollock grew up in the West, and he literally helped build the road to the Grand Canyon with his father,” says Mary Savig, curator of manuscripts at the Smithsonian’s Archives of American Art. “The photo helps you understand his childhood and his vision of an expressive landscape that most people in the United States didn’t have a chance to see at that time. Many scholars believe those memories influenced the artwork he created after he moved to New York.”

The photo is part of a new exhibition “Off the Beaten Track: A Road Trip through the Archives of American Art,” which examines the lives of both famous and lesser-known artists across the country. On view through June 3, the exhibition includes items from every state and the District of Columbia dating from the 1830s to the 2000s, including photos, sketches, diaries, correspondence and video recordings.

The Archives of American Art is a preeminent research center housing more than 20 million items documenting the history of the visual arts in America. Founded in 1954 in Detroit, the Archives joined the Smithsonian Institution in 1970, and its small gallery is located in the historic Old Patent Office building with the National Portrait Gallery and Smithsonian American Art Museum.

“Off the Beaten Track” offers a behind-the-scenes view of the more personal aspects of artists’ lives. All 51 of the items on display can be viewed on the Archives’ website in images that can be magnified so the delicate cursive script of aging letters or the details of a vintage photo can be clearly seen. 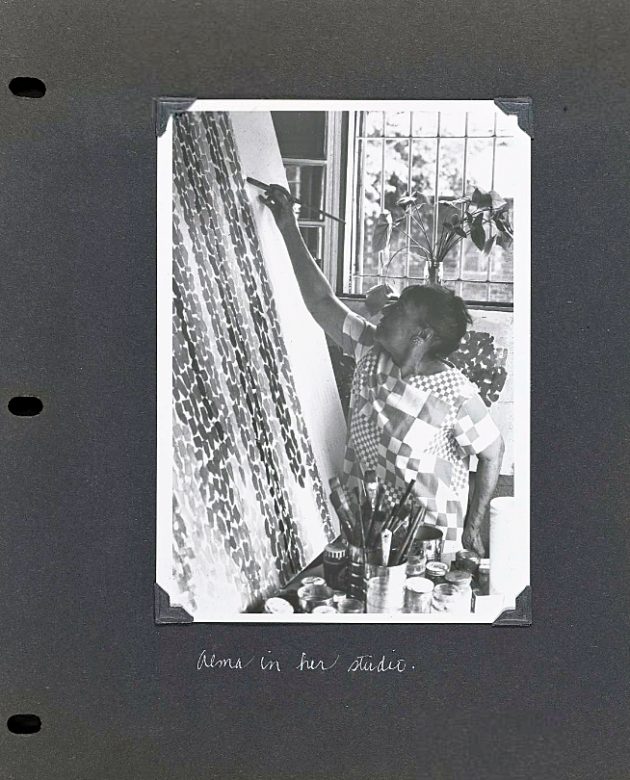 This image “Alma in her studio” is from a photograph album of the family of Alma Thomas. It is among the material contained in the Alma Thomas papers, 1894-2000, in the Smithsonian’s Archives of American Art.

While curating the exhibition, Savig didn’t want to display items just about the most famous artists from each state. “A lot of people might assume the art world is just in big cities like New York or Los Angeles, but we try to tell the story of art history across the country,” she says. “I wanted to show something that was a little unexpected from each state that would hopefully spark more questions about American art history.”

Savig has written books about handwritten letters from artists in the Archives’ collection and handmade holiday cards created by artists using original watercolors, drawings, etchings or silk-screen prints. One of her favorite items in “Off the Beaten Track” is a photo of local Washington, D.C. artist Alma Thomas painting in her sunlit kitchen studio at her home near Logan Circle, which is now listed on the National Register of Historic Places.

Thomas was the first arts graduate from Howard University in 1924, and she taught at Shaw Junior High School for 35 years before her abstract paintings received widespread acclaim following her retirement. 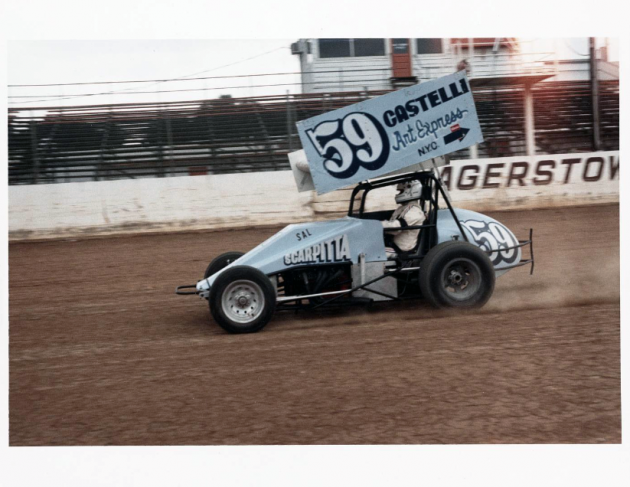 This image of artist Salvatore Scarpitta racing his car at Hagerstown Raceway, Aug. 23, 1987, is among the materials in the Leo Castelli Gallery records, circa 1880-2000, at the Smithsonian’s Archives of American Art.

In a 27-minute silent video included in the exhibition, artist Nancy Holt directs the installation of four massive concrete tunnel sections in Utah’s Great Basin Desert in a 1970s earthwork called “Sun Tunnels” that Holt said would “bring the vast space of the desert back to human scale.”

Another dizzying video features a 1970 road trip from Houston to Galveston where artist Earl Staley filmed every billboard he passed with a Super 8 video camera while his friend Bob Camblin was driving.

After their deaths, artists often are reduced to just names on wall labels as if they didn’t have families or other pursuits that shaped their lives beyond their artwork. A color photo from 1987 widens that frame to show sculptor Salvatore Scarpitta racing a mini sprint car that he designed at the Hagerstown Speedway in Maryland.

The baby-blue race car, emblazoned with the number 59 and art dealer Leo Castelli’s name, kicks up dust on the dirt track in front of some dilapidated bleachers. In an example of art imitating life, Castelli sponsored Scarpitta’s race car team and exhibited some of his cars as works of art. 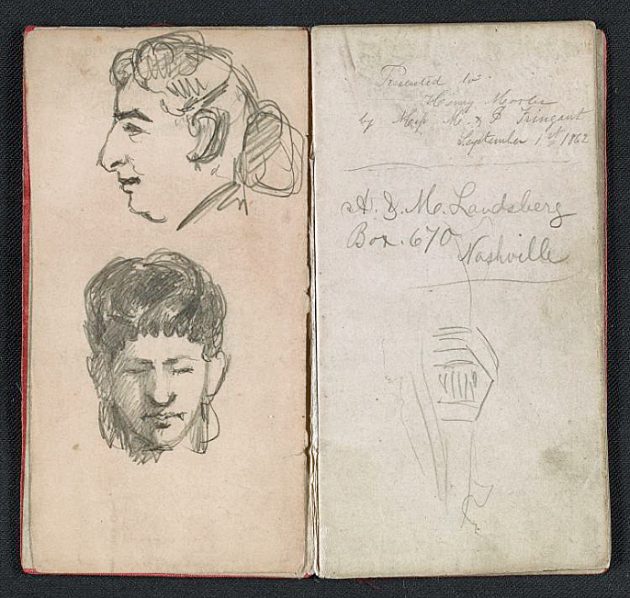 Illustration and writing in Henry Mosler’s Civil War diary, 1862. The diary contains records of sketches Mosler made for Harper’s Weekly, a narrative of his activities during 1862, financial notes, poems, names and addresses, and several sketches. Mosler’s diary is among the Henry Mosler Papers, 1856-1929, in the Smithsonian’s Archives of American Art.

Henry Mosler’s experience as an illustrator for Harper’s Weekly documenting the horrors of the Civil War is recounted in his 1862 diary. After a crucial victory by the Union Army in the Battle of Perryville in Kentucky, Mosler described the grisly aftermath in a field hospital after the battle where almost 4,000 Union soldiers were killed or wounded. In flowing script, Mosler wrote that “about 200 wounded were lying suffering some crying Oh! mother Oh! Doctor Oh give me some water.” It was “enough to make anyone feel the terror of this war.”

A series of four vintage 1970s Polaroid photos taken by artist Ray Yoshida show details of hand-painted business signs, including a hairdryer and scissors outside a beauty salon. An influential teacher at the School of the Art Institute of Chicago, Yoshida often found inspiration for his intricate collages and paintings during his meandering walks off the beaten track in the Windy City. 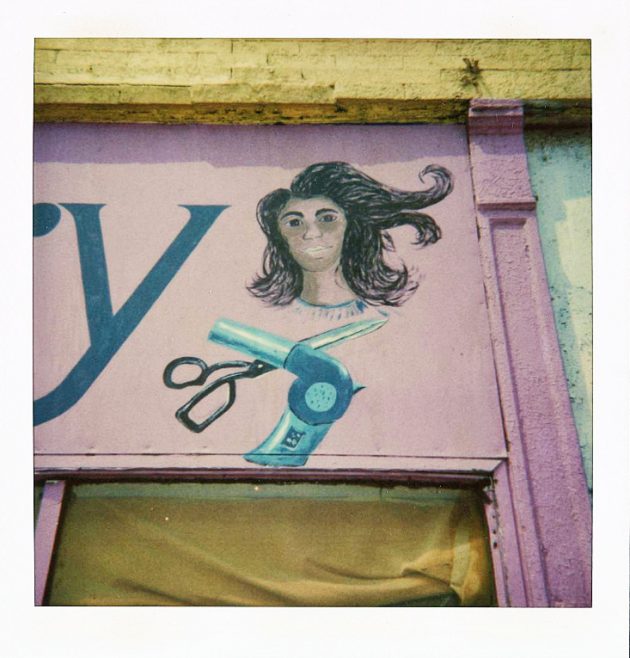 Detail of a Chicago beauty salon sign taken by Ray Yoshida between 1972 and 1981. It is among the Ray Yoshida papers, circa 1895-2010, in the Smithsonian’s Archives of American Art.

The Archives gallery is unusual because it offers documents and other historical items to view rather than artwork, but Savig hopes visitors will learn something during their visit to the gallery in the Old Patent Office building.

“We consider ourselves the hidden gem inside that building,” she says. “We want people to see themselves in our collection and recognize that these artists lived and worked across America.”