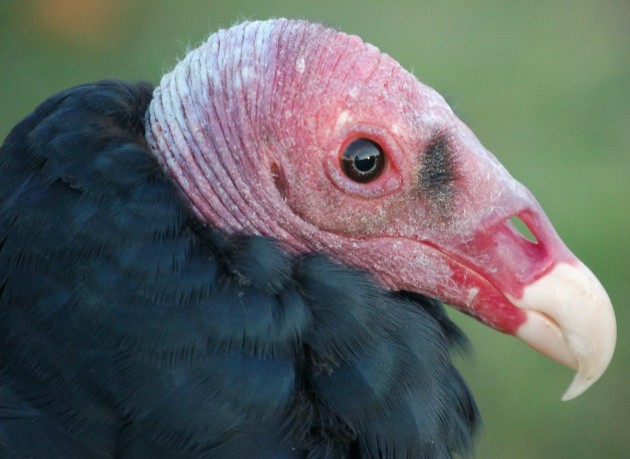 This image of a turkey vulture shows the large, well-developed nostrils which help these birds detect the faintest scent of carrion from high in the air.  A new anatomical study shows turkey vulture brains have an extremely large olfactory bulb to match. (Photo by Dario Niz / Wikimedia Commons)

With its homely featherless head, undertaker’s charcoal coloring and association with death and decay, the turkey vulture (Cathartes aura) tops few lists as a favorite bird. Still, as a new study shows, it has been heartily favored by one who matters most: Mother Nature.

A new anatomical examination of the brain of the turkey vulture by scientists from the Smithsonian and University of Lethbridge, Canada, has revealed this winged scavenger possesses one of the largest olfactory bulbs (a part of the brain that helps control smell) of all the birds. This super-sensitive organ makes the turkey vulture comparable to an airborne bloodhound, able to detect the faintest molecules wafting into the air from a decaying carcass thousands of feet below. 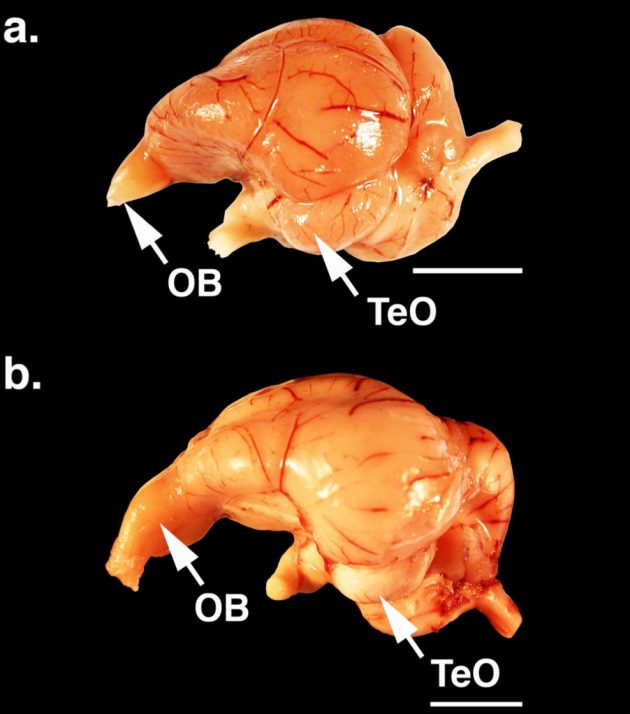 Shown above are the brains of (a) black vulture and (b) turkey vulture. Arrows indicate the olifactory bulb (OB) and optic lobe (TeO) of each specimen.

In a paper published in the journal Scientific Reports on Tuesday, Dec. 12, these researchers compared the brains of the turkey vulture and the black vulture (Coragyps atratus), a sympatric species, and showed the turkey vulture’s olfactory bulb to be four times larger and contains a much higher number of mitral cells. Mitral cells are neurons that receive information from smell receptors in the vulture’s nasal cavity and transfer that information to the rest of the brain.

Despite their larger olfactory bulb, turkey vulture brains measured 20 percent smaller than the brains of the black vulture.

“In absolute terms, turkey vultures have the largest olfactory bulb of anything we’ve measured so far,” says paper co-author Andrew Iwaniuk, professor in the Department of Neuroscience at the University of Lethbridge, which maintains the world’s largest comparative collection of bird brains: some 550 specimens representing 165 bird species. “When you compare turkey vulture olfactory bulbs to the relative size of the rest of their brain, they are enormous.” 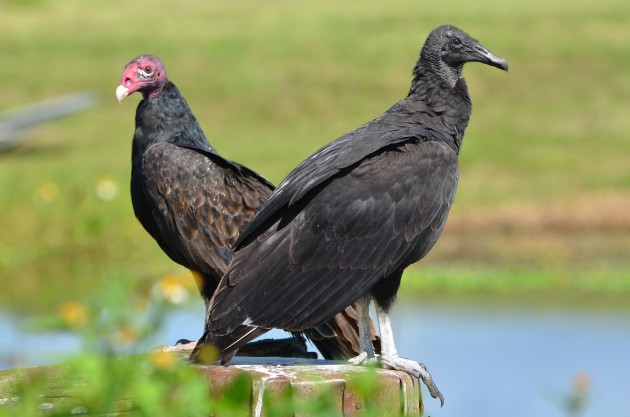 Combined with its greatly enlarged nasal cavity, these structures form a highly sensitive olfactory system, one that has allowed turkey vultures to colonize areas in the New World that other vultures cannot, such as temperate and tropical forests with dense canopies.

“Observations of turkey vultures have long shown they have an exquisite sense of smell,” says paper co-author Gary Graves, an ornithologist in the Division of Birds at the Smithsonian’s National Museum of Natural History. “Now, for the first time, anatomical evidence verifies this fact and suggests the turkey vulture may have the most sensitive olfactory senses among living birds—some 11,000 plus species.”

These photomicrographs depict the different layers of the olifactory bulbs in (a) turkey vultures; (b) the black vulture and (c) the silver gull. ML represents the mitral cell layer.

Vultures used in the study were collected by the Smithsonian in 2012 in Nashville, Tenn., during a routine USDA-sponsored culling of nuisance vulture roosts. To count the individual mitral cells in the vulture’s olfactory bulbs their brains were sliced into thin sections fractions of a millimeter thick, and mounted on microscope slides by a team of researchers at the University of Lethbridge. Each vulture brain represented thousands of sections.

“Because of the size of its olfactory bulbs, the mitral cell count for the turkey vulture is much greater than what we see in many mammals,” Iwaniuk observes. “This is surprising because we don’t typically associate strong sense of smell with birds.” Turkey vultures have three times as many mitral cells as a rabbit or a rat. 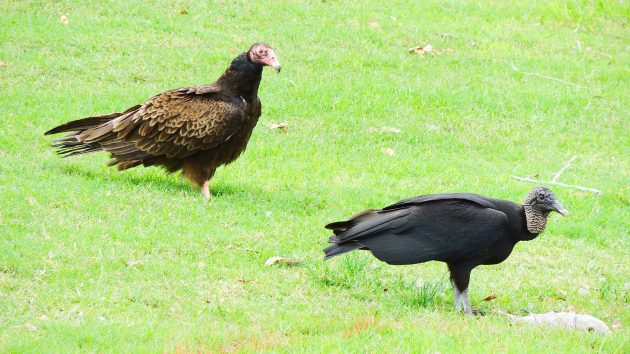 “Everything that happens in the olfactory bulb is the first step of sensory processing. It’s the stage at which an animal is categorizing different kinds of smells but is not actually perceiving them yet. The conscious perception of ‘Oh. That smells like cheese versus that smells like a rose,’ occurs further up the pathway. Mitral cells are what enables that categorized information to get to regions that are involved in discriminating different kinds of scents and ascribing a name or object to that particular smell.”

“We don’t know just what mixture of gasses these birds are smelling,” Graves observes. “It is a complex cocktail of hundreds of different gasses that come up from a dead carcass. Decaying skin does not emit the same chemicals as decaying fat, decaying muscle or decaying cartilage.” 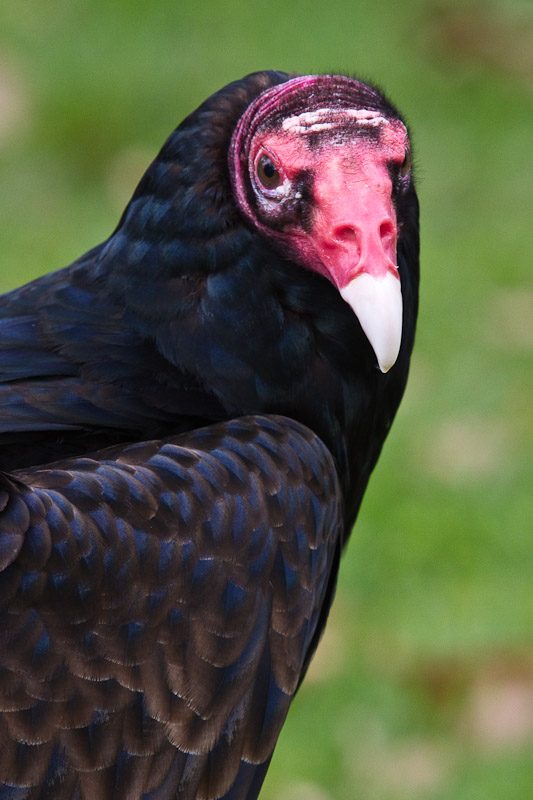 Like a bloodhound they track back and forth with the wind currents continually sniffing the air until they gradually zero in on their target, which might be as small as dead mouse on the forest floor under some leaves, Graves adds. Their long and broad wings allow them to glide just above the treetops.

Most turkey vultures do not weigh as much as a fryer chicken. A full grown one weighs about 4 pounds; they are all feathers. After zeroing in on a carcass they land, walk-up to it and begin feeding.

Turkey vultures and black vultures belong to a group of new world vultures called the Cathartidae, which include the California condor, the Andean condor and the king vulture of Central and South America. Black vultures, king vultures and condors must rely on vision alone to find carrion.

Turkey vultures belong to a small group in the genus Cathartes—which includes two Central and South American species called the lesser and the greater yellow-headed vulture. All three of these birds find carrion through smell.

Whether turkey vultures have a better sense of smell than other bird species that rely on smell for navigation and finding food, such as the albatross and other seabirds, remains to be tested. Based on this anatomical study however, the turkey vulture’s sense of smell is clearly superior to most other birds.