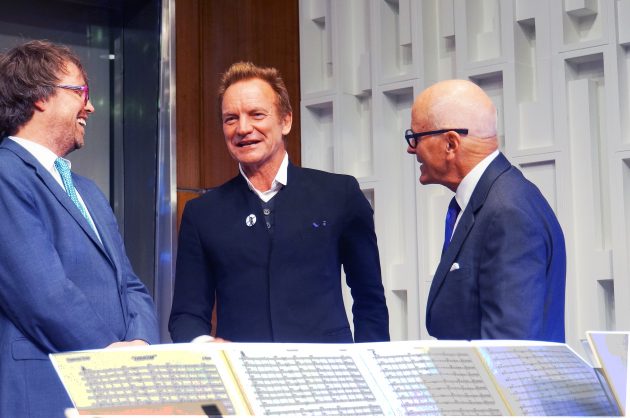 “Before I became a rock star I had a real job,” Sting, founder and lead singer of the band The Police, told the audience during a donation ceremony at the Smithsonian’s National Museum of American History Friday, Sept. 8. The British musician, composer and humanitarian was at the museum to turn over his 1978 Fender Stratocaster electric guitar to the museum’s Division of Musical History.

Working as a school teacher in a tough mining village in the North of England, “I realized you could never teach anyone anything unless you entertained them first, unless you enthused them and gave them a spark of your own enthusiasm about what ever subject you were teaching—music or soccer or history,” he recalled. “You had to be enthusiastic. You had to entertain.” 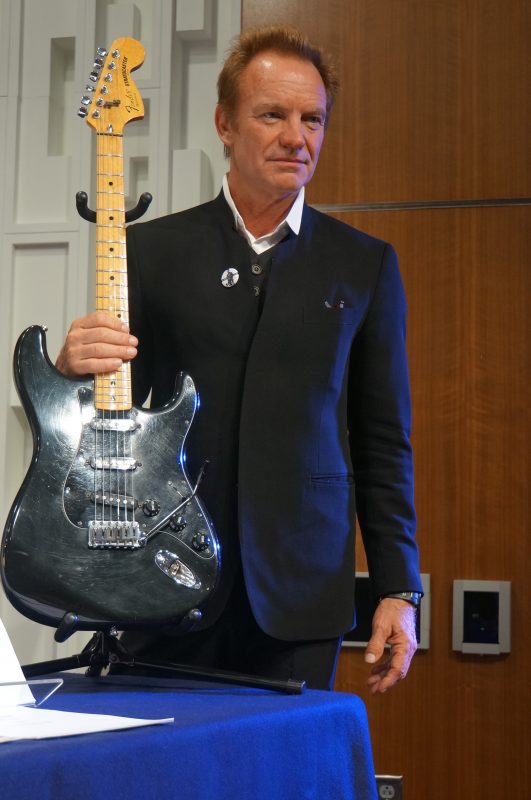 Sting with the Fender Stratocaster he donated to the American History Museum. (Photo by John Barrat)

Purchased new in 1978 at Manny’s Music Store on 48th Street in New York City, the black-bodied guitar was the first Stratocaster Sting ever bought, “the first one I could ever afford, to be honest. It cost about $200-$250,” he said. “I had to think very long and hard about what I would donate to the Smithsonian. I figured that it would have to be something that I cherished greatly.”

“Message in a Bottle,” the Police hit song released in 1979, was written on this guitar, as were other hits. Sting also used it during a September 1981 performance at the Amnesty International Gala, “The Secret Policeman’s Other Ball,” at the Theatre Royal, Drury Lane, London. “That performance gave me an idea that perhaps I could set out on my own and not be in a band anymore, and so I thank Amnesty for that, for that feeling of independence that I have now.”

(At the 1981 “Secret Policeman’s Other Ball” Sting plays “Message in a Bottle,” with the Stratocaster he donated to the Smithsonian on Friday, Sept. 8.)

Earlier during the same ceremony J. Ralph—composer, producer and songwriter from New York City—donated original sheet music, lyrics and recordings for the Oscar-nominated “The Empty Chair,” a song co-written with Sting. Evocative, “The Empty Chair,” was written for the documentary “Jim: The James Foley Story,” about American photojournalist James “Jim” Foley who was kidnapped in Syria and went missing for two years before his tragic death sent shockwaves around the globe. Foley’s parents John and Diane Foley were in attendance at the donation.

A discussion of philanthropy moderated by Smithsonian Secretary David Skorton and a performance of “The Empty Chair,” by Sting, plus the world premiere of J. Ralph’s symphonic piece “Evolocean” followed the donation ceremony in the American History Museum’s Warner Brothers Theater. The program was designed to highlight the artists’ musical and philanthropic contributions to American music and culture. 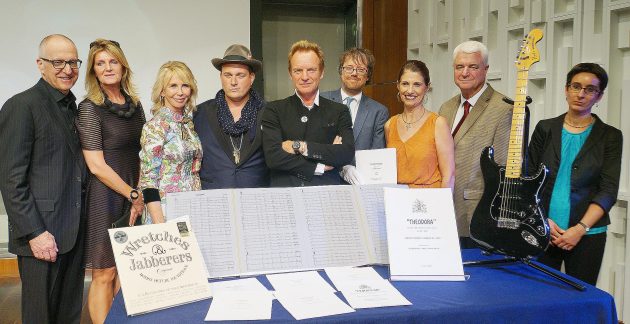 Sting’s Stratocaster is a “characteristically thoughtful, reflective and truly fantastic donation to our national collections,” John Troutman, curator of Musical History at the American History Museum, said. “In addition to ‘Message in a Bottle,’ all of the songs on the second, third, fourth and final studio albums for The Police were also composed on it. It is an instrument of remarkable provenance by these recordings alone, yet his choice to donate this guitar today also so eloquently speaks to our museum’s new collecting initiative on the relationship between philanthropy and the arts. This is the tool he used when he embarked upon what was to become a lifelong journey to gather attention to global problems and to secure the resources to solve them.”

“I donate this with some sadness, but with a great deal of pride,” Sting concluded. He then noted, referring to British chemist and founding donor of the Smithsonian Institution, James Smithson (c. 1765–1829), “I’m happy to know that an Englishman actually started the whole thing!”