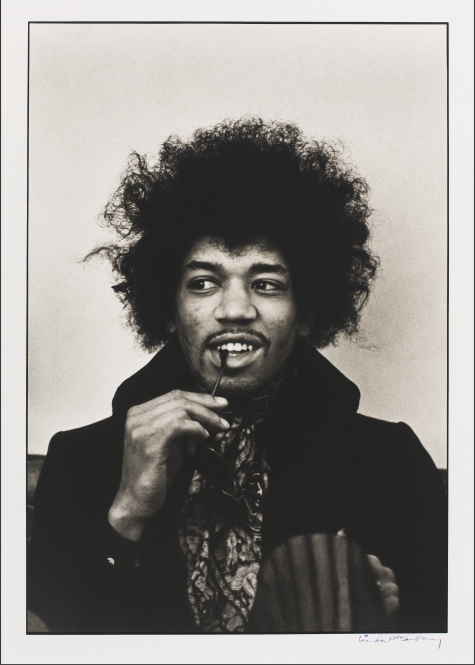 In the late 1960s, Jimi Hendrix (1942–1970) shattered the notion of what the electric guitar could be: On stage he was simultaneously self-possessed and otherworldly, playing the guitar with his teeth and behind his back, even setting it on fire.

He took standard blues and changed it through psychedelic sonic alchemy, mining the depths of the instrument’s poetic expressiveness by testing its physical limits. Through a brilliant manipulation of feedback and amplification, Hendrix created soundscapes of deep texture and distortion, of electronic waves and wah-wah.

“Sometimes I jump on the guitar. Sometimes I grind the strings against the frets….Sometimes I play the guitar with my teeth or with my elbow. I can’t remember all the things I do.”—Hendrix.

This photo is one of 100 that make up the “American Cool” exhibition at the Smithsonian’s National Portrait Gallery, curated by Joel Dinerstein and Frank H. Goodyear III. It portrays icons who have contributed an original artistic vision to American culture and are symbolic figures of their time. The exhibition continues through Sept. 7, 2014.

Read about Hendrix’s groundbreaking playing at the “The Invention of the Electric Guitar” from the Lemelson Center for the Study of Invention and Innovation at the Smithsonian’s National Museum of American History.

Watch a video from the Smithsonian Channel demonstrating the history of the electric guitar—played in one song.