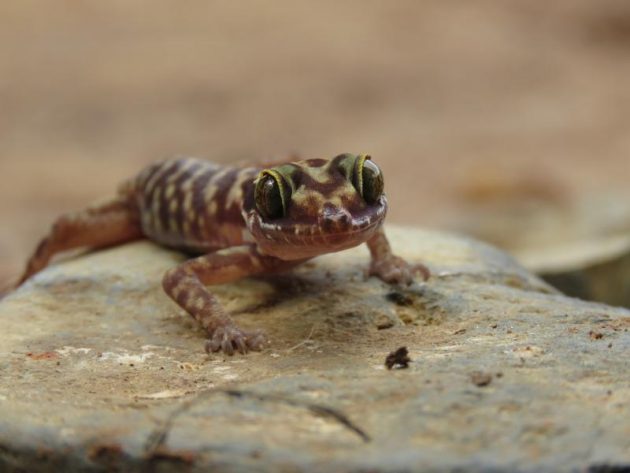 The Tenasserim Mountain bent-toed gecko is one of two new species of gecko discovered during a biodiversity survey in little-studied areas of Myanmar by Smithsonian and Fauna & Flora International scientists. (Photos by Grant Connette, Smithsonian Conservation Biology Institute)

Smithsonian scientists have discovered two new gecko species—the Lenya banded bent-toed gecko (Cyrtodactylus lenya) and Tenasserim Mountain bent-toed gecko (C. payarhtanesnsis)—in the little-studied lowland forests of Myanmar. In a study published April 12 in PLOS ONE, the authors describe the new species but warn that rapid deforestation poses an imminent threat not only to the geckos but to the many species that share their habitat.

“Southern Myanmar has incredible lowland forests that scientists have not had a chance to explore because of a history of armed conflict in the area,” said Grant Connette, Smithsonian Conservation Biology Institute fellow and lead author on the paper. “Recent political change has opened up the area so we can now survey the biodiversity, but there has also been a rapid increase in forest clearing, often for rubber and palm oil plantations. As we are trying to document these species for the first time, we are witnessing the loss of the forests they depend on.”

The study, which also included authors from the Smithsonian’s National Museum of Natural History and Fauna & Flora International, focuses specifically on the biodiversity and deforestation in and around Myanmar’s proposed Lenya National Park. This area is traditionally a stronghold for rare and threatened species, such as the tiger, Asian elephant and Malayan tapir.

Myanmar is a globally recognized biodiversity hotspot, supporting a very high number of species, many of which are unique to the region and of global importance. 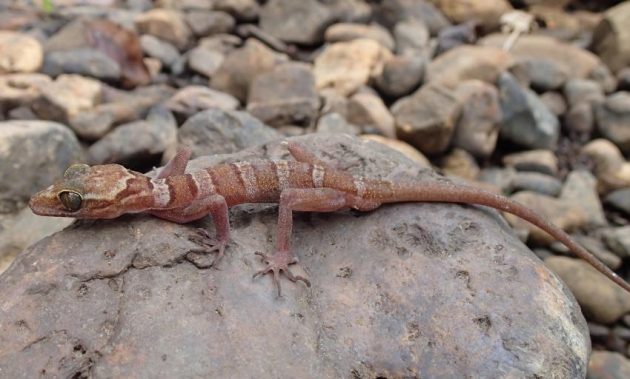 The Lenya banded bent-toed gecko is one of two new species of gecko discovered during a biodiversity survey in little-studied areas of Myanmar by Smithsonian and Fauna & Flora International scientists.

Myanmar also has one of the highest deforestation rates in the world. The researchers used satellite data to determine that the proposed national park has recently been losing forest at a rate that is double the national average from 2002 to 2014. Forests surrounding the proposed national park have been cleared even faster, with a rate of loss 25 times greater than the rest of the country. Once cleared, the forests are often replaced by agricultural or agroforestry crops. Lowland forests have almost completely vanished from mainland Southeast Asia, making the intact forests in Myanmar especially valuable.

In 2016, the paper’s authors conducted a survey of the amphibians and reptiles of the proposed national park, finding 67 species of frogs, snakes and lizards, including the two newly discovered bent-toed geckos. Myanmar has 18 known species of bent-toed geckos, which come in a variety of colors and patterns. Bent-toed geckos often have a limited geographic range, and the researchers found these two species near areas of recent forest clearing, according to Daniel Mulcahy, herpetologist at the National Museum of Natural History and co-author on the paper.

“These geckos are flagships for conservation in this incredibly diverse landscape,” Mulcahy said. “We can help these newly identified geckos by determining what species are in the area, whether they live only here and nowhere else, and whether they have sufficient protection. With that information, conservationists can work with the government and local villages to implement practices that give these species a chance at a future.”

These efforts are part of the Smithsonian’s Myanmar Biodiversity Initiative, led by Melissa Songer, SCBI conservation biologist and co-author on the paper. The initiative uses science to help increase conservation capacity of Myanmar partner organizations and ensure the long-term survival of species, landscapes and ecosystems in the country. The data collected in this biodiversity survey and those in the future will become part of a broader project collecting baseline biodiversity data to inform management of protected areas in the country.

“Given the Smithsonian’s more than 20-year history doing research and training in Myanmar, we are uniquely positioned to really ramp up our scientific and conservation efforts in this changed political climate,” Songer said. “While we do not think people realize just how fast these forests are going, we are hopeful that there are new opportunities now to safeguard the forests in this unique part of the world.”