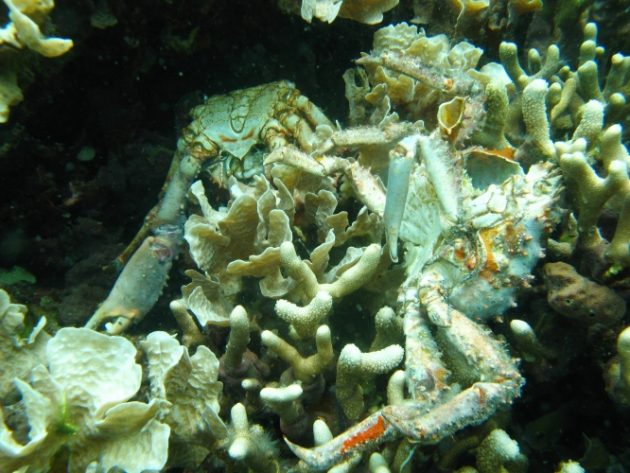 Crabs were flushed from reef crevices by low oxygen conditions but ultimately succumbed to hypoxia. (Photo by Arcadio Castillo)

Dead zones affect dozens of coral reefs around the world and threaten hundreds more according to a new study by Smithsonian scientists published in the Proceedings of the National Academy of Sciences. Watching a massive coral reef die-off on the Caribbean coast of Panama, they suspected it was caused by a dead zone—a low-oxygen area that snuffs out marine life—rather than by ocean warming or acidification.

“Ocean warming and acidification are recognized global threats to reefs and require large-scale solutions, whereas the newly recognized threats to coral reefs caused by dead zones are more localized,” said Andrew Altieri, staff scientist at the Smithsonian Tropical Research Institute and first author of the study. “Fortunately dead zones can be reduced by controlling sewage and agricultural runoff into the ocean.” 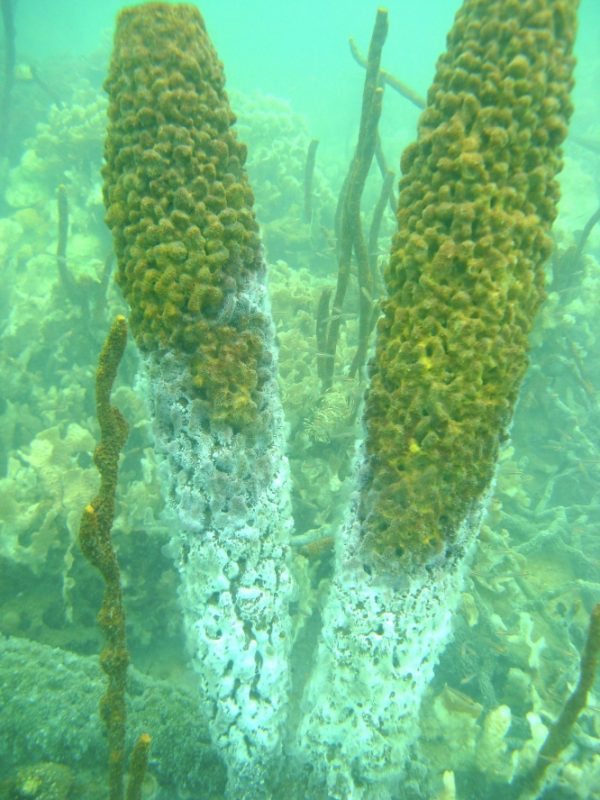 Low oxygen conditions were most severe below a depth horizon, evident through mortality on the bottom of these sponges. (Photo by Arcadio Castillo)

In September 2010, coral reefs in Almirante Bay, Bocas del Toro Province, showed severe signs of stress. In addition to corals turning white and dying, which is typical during coral bleaching associated with warming events, there were other clues suggesting that more was involved than high temperatures. Many unusual observations pointed to something else as the culprit. There were thick mats of bacterial slime, and the dead bodies of crabs, sea urchins and sponges lay scattered on the ocean floor. Even more odd, there was a clear depth line above which the reefs looked OK, and below which something had gone terribly wrong. Even single colonies of corals that straddled the line were fine above and dying below.

Scientists went to work, measuring several aspects of water quality. One set of measurements came back as a shock. Extremely low oxygen levels in deeper waters contrasted with high oxygen levels in shallow waters where corals were still healthy. This is the hallmark of a dead zone. 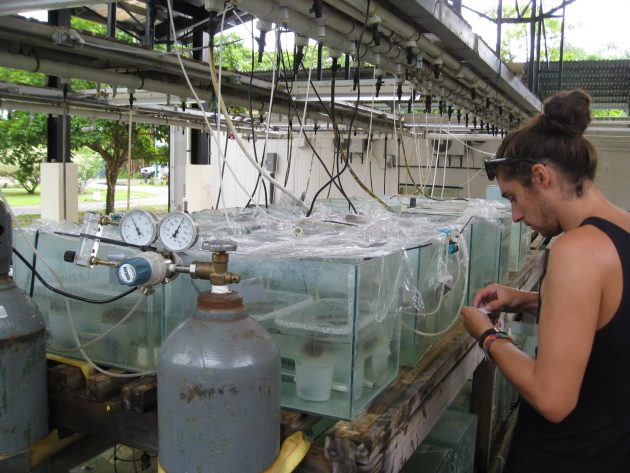 The team thinks that such dead zones may be common in the tropics but have gone largely unreported, simply because scientists never looked. “The number of dead zones currently on our map of the world is 10 times higher in temperate areas than it is in the tropics, but many marine biologists work out of universities in Europe and North America and are more likely to find dead zones close to home,” Altieri said.

“We were lucky that there was already a reef-monitoring program in place as part of ongoing work at the Smithsonian’s Bocas del Toro Research Station,” said Rachel Collin, station director.

“Based on our analyses, we think dead zones may be underreported by an order of magnitude.” said Nancy Knowlton, coauthor and Sant Chair for Marine Science at the Smithsonian’s National Museum of Natural History. “For every one dead zone in the tropics, there are probably 10—nine of which have yet to be identified.” 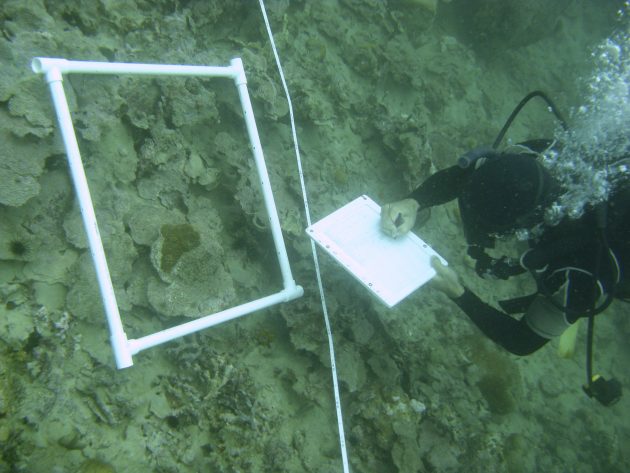 Andrew Altieri surveys a reef littered with dead corals where over 90% died due to hypoxia. (Photo by Cindy Gonzalez)

The researchers found 20 instances when dead zones were implicated in the mass mortality of coral reefs worldwide. “Hypoxia (low oxygen) isn’t even mentioned in several of the most important academic reviews of threats to coral reefs and is rarely discussed at scientific meetings,” Altieri said. “Even worse, many coral-reef monitoring efforts do not include measurement of oxygen levels, making it nearly impossible to identify low oxygen as the cause of mass coral mortality after the fact.” For example, the cause of a 2016 mass mortality at the Flower Garden Reefs in the Gulf of Mexico remains unclear, but some of the photographs look strikingly similar to what was observed in Panama.

The authors argue that building capacity to monitor oxygen on reefs will help people to improve coral-reef health and understand how dead zones might interact with other forces such as global warming in a one-two punch, which put reefs in even greater danger.