I was a glittering artwork, on exhibit in Washington, D.C. 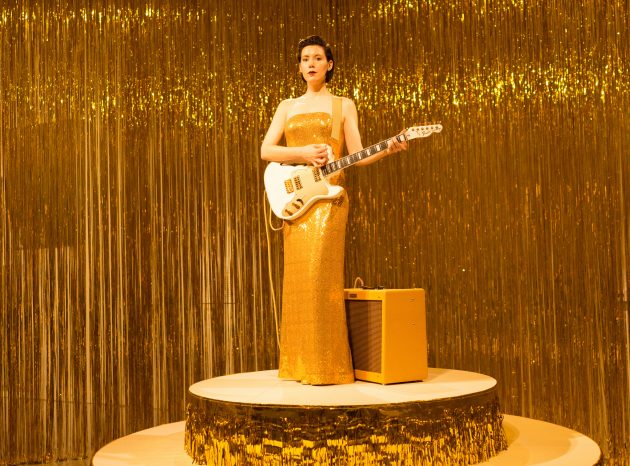 “Woman in E” at the Smithsonian’s Hirshhorn Museum and Sculpture Garden. (Flickr photo by Victoria Pickering)

At 53, Martha Hamilton was the oldest of 14 female performers who portrayed Ragnar Kjartansson’s “Woman in E” at the Smithsonian’s Hirshhorn Museum during the Icelandic artist’s recent exhibition there, which closed in January.

“Woman in E,” consisted of a solitary, sequin-clad woman strumming an E minor chord on an electric guitar over and over while slowly rotating in the center of a golden, tinsel-walled room.

“Woman in E,” which originated at the Museum of Contemporary Art Detroit was, in part, an allegory to that city’s rapid post-industrial decline. It was brimming with symbols and motifs. Each performer appeared in 2 ½ hour shifts throughout the day and was instructed to act melancholy, gloomy, like the Statue of Liberty and not to interact with visitors.

In this video Ragnar Kjartansson talks about his creation “Woman in E.”

“I would hear the gallery guides working with… my age as a contributing factor as to how one would think of Detroit…being past your prime,” Hamilton recalls. “On one hand, I’d be like, ‘Aw man, you’re talking about me?’ But I like the fact that my age contributed more to Kjartansson’s piece.”

“There were a lot of differences and nuances and variations in the way the piece was lived,” the Hirshhorn’s chief curator Stéphane Aquin, says. “But all in all, the constraints set forth by the artist were such that it was always a ‘Woman in E.’

“They all wore the same gown­—gold sequined—they all had to make up in a certain way and they all had this distant, dignified attitude of beauty,” Aquin adds. “They had to be sculptural, they had to be posed very solemnly, and then it was always the same note.”

She can be the classic, objectified odalisque or female attendant—“one that you would see in some art history textbook or catalog of the ideal woman,” Aquin says, “perfect and gold, standing in very traditional iconography.” 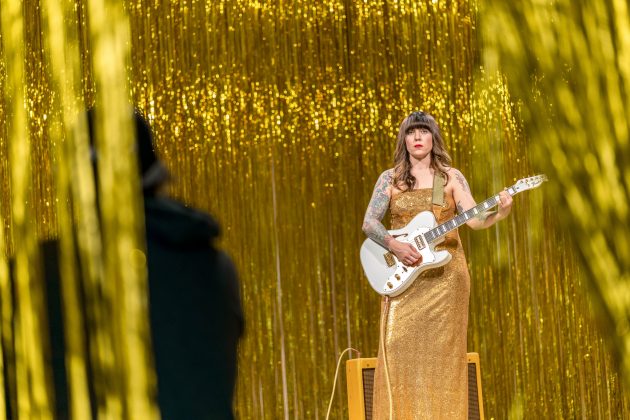 ” Woman in E” at the Hirshhorn. (Flickr photo by Lorie Shaull)

Her remote sanctum atop a pedestal can be, Hamilton says, “a womblike environment,” an incubator of sorts.

It can be a hiding place too, says Aquin, where more timid visitors peer in “through the tinsel curtain” without encountering the performer within.

Played over and over, the electrified E chord resonates as a solemn comment on life, death, decay, decline and rebirth. But it can also be “a very regal chord and a very commanding chord,” Beck Levy, another actress who assumed the role of “Woman in E,” says.

Loud and repeated, the electrified E can be at times “so dazzling and so jarring,” Levy adds, as to eclipse all the other aspects of the performance.

“No two people can play the same chord the same way,” says Levy, who performs with the band Hand Grenade Job in the Washington, D.C. area. “I felt pretty strongly that my unique presence would add its own color to the piece, but honestly … I wasn’t really trying to break a sweat being myself up there.”

When angry, Levy says, she sometimes “had more of a strong attack on the chord.” When she wanted to show the world a little tenderness and mercy “the chords came out gently,” she recalls. And sometimes, she was so lost in thought that she paused too long between strums.

“Most of the time, all that I did was just listen to the sound,” says Hamilton, an art punk guitarist for local band the Plums and drummer for Nice Breeze. “I would get bummed if I hit the next chord before there was complete decay [of the previous], like the strings had to completely stop ringing.”

Martha Hamilton, a nurse informaticist by day, has worked as a sculptor’s assistant and says she felt “really comfortable helping someone else bring their vision to reality.”

“It was very liberating, because it’s not about me at all,” she says. “And even when they talked about my age, it didn’t really bum me out a ton. It was just like, ‘OK, well you notice that.’”

Hirshhorn acquires full series of Kjartansson’s “Me and My Mother”