In 1969, 60 to 100 peacock bass imported from Buga, Colombia, were introduced into a pond in Panama for sport fishing. Several individuals escaped. By the early 1970s, they colonized Gatun Lake, the reservoir forming the main channel of the Panama Canal. Forty-five years later, native fish populations in the lake still have not recovered according to a new Smithsonian report.

Peacock bass, Cichla monoculus, originally from the Amazon River and its tributaries, are voracious predators. They are considered delicious game fish and have been intentionally stocked for recreational and commercial fishing around the world.

In 1973, Thomas Zaret and Robert Paine, working at the Smithsonian Tropical Research Institute (STRI) field station on Barro Colorado Island, published a study in Science magazine showing that 60 percent of the native freshwater fish in Gatun Lake were extirpated after the accidental release. Their study was one of the first to demonstrate how devastating predator introductions can be and remains one of the most highly cited studies on this subject.

“Very few studies have examined the long-term outcome of an invasion by a predatory fish,” said Diana Sharpe, postdoctoral fellow in staff scientist Mark Torchin’s lab at STRI and at Canada’s McGill University. “This is the perfect place to test Zaret and Paine’s prediction that certain species would never return to the lake by repeating their study 45 years later.” 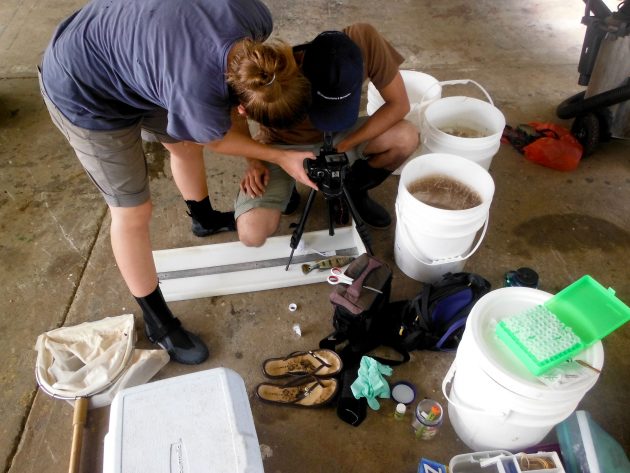 “Bob Paine passed away earlier this year, in his 80s,” Sharpe said. “I had the opportunity to correspond with him just a few months before his death, and he was very excited that someone was finally doing a follow-up. He kindly Fed-Exed a huge stack of unpublished data related to their original work…all the way to Panama!”

Sharpe teamed up with two Panamanian scientists, Luis Fernando De León, assistant professor at the University of Massachusetts and research associate at INDICASAT-AIP in Panama, and Rigoberto González of STRI to capture fish in gill nets and beach seines. They photographed, weighed, measured and released most of the fish. Several fish of each species were preserved for reference.

“Seining was very tricky because it involves wading through the shallows dragging a heavy net,” Sharpe said. “The crocodile population in Gatun Lake has increased sharply since the 1970s. We had to abort our seining on more than one occasion after spotting crocs basking in the shallows. At one point, we actually caught a small croc and had to cut the net to release it.” 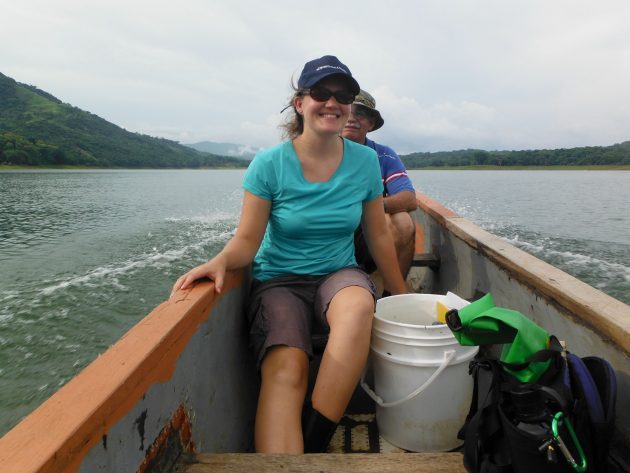 “Zaret and Paine recorded 12 native fish species in the Trinidad arm of Gatun Lake in 1972 before the peacock bass invasion reached that region of the lake,” Sharpe said. “We recaptured only three of those species after extensive seining. Our study shows that despite the appeal of peacock bass as a sport fish, the introduction of a novel apex predator can have dramatic and long-lasting impacts on native communities, even in diverse tropical communities, which are sometimes thought to be more resistant to invasion.”

Of the 1471 fish they netted in Gatun Lake, 25 were native freshwater species and 10 were freshwater-tolerant marine species, which must have migrated into the lakes through the canal locks. Several other exotic fish have also increased over time, including the Jaguar Cichlid, Parachromis managuesis, the Oscar, Astronotus ocellatus, and the Nile tilapia, Oreochromis niloticus, not present in the lake in 1972.

As an additional way to test for predator effects, they also compared the fish communities in two invaded lakes, Gatun and Alajuela, with fish communities in Lake Bayano, where there are no peacock bass. Gatun and Alajuela were also invaded by the jaguar cichlid, sometime between 2004 and 2013. The abundance of native fish was much greater in Lake Bayano than in the lakes containing peacock bass, corroborating the pattern observed in Gatun Lake through time.

This is not the first case of an introduced fish doing away with the natives. Nile perch, Lates niloticus, released into Lake Victoria in Africa caused the presumed extinction of 250 endemic cichlid fish in the 1980s.

“This study illustrates the value of historical and long-term data collected at the Smithsonian in Panama,” Torchin said.  “The comparison would not have been possible without Zaret and Paine’s work 45 years ago around Barro Colorado. We never know when we’re going to go back and use data from studies in the past, but in Panama we are lucky to have data on fish populations that goes back to Hildebrand and Meek’s studies as part of the Smithsonian’s Panama Biological Survey in 1910.”