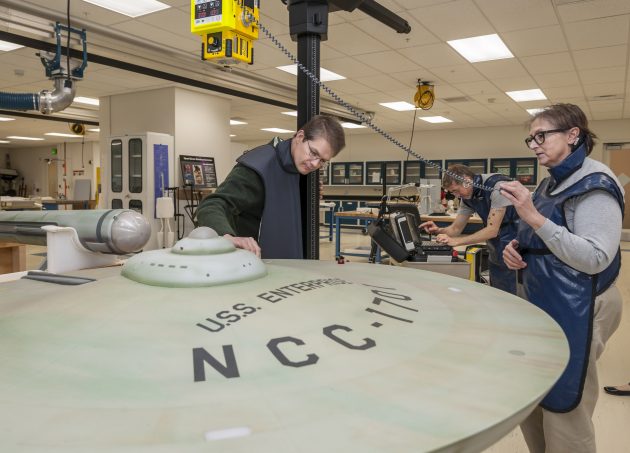 Malcolm Collum of the National Air and Space Museum’s Conservation Laboratory, left, with Peter Flowers and Marilyn Small, veterinary technicians from the Smithsonian’s National Zoological Park, use a portable radiography machine to X-ray the Starship “Enterprise” at the Air and Space Museum’s Steven F. Udvar-Hazy Center, Dec. 2014. (Photo by Dane A. Penland)

Space: the final frontier. These are the voyages of the Starship Enterprise…and you know the rest, probably even if you’re not a huge fan of Star Trek.

Rather than a five-year mission through the cosmos, the 200-pound Enterprise studio model used in the original 1960s television series recently took a five-year journey through its fourth restoration. 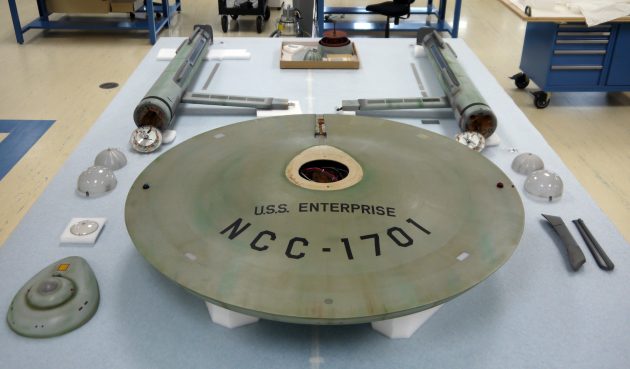 Unveiled June 28th in the new Boeing Milestones of Flight Gallery at the Smithsonian’s National Air and Space Museum, the 11-foot-long studio model can now be seen as it appeared in the 1967 episode “The Trouble with Tribbles,” complete with whirling warp drive lights and a clear view of the model’s rougher “back of house side” where unsightly wiring for the internal electronics emerge.

Led by Malcolm Collum, chief of conservation at the museum, a team of Smithsonian conservators and outside experts explored the storied spacecraft with X-rays, ultraviolet photography, historic research and thousands of advisory e-mails to chart the course for its restoration.

X-ray composite of the left nacelle of the Star Trek Starship “Enterprise” studio model. In December 2014, staff of the National Air and Space Museum and the National Zoo utilized a portable radiography (X-ray) machine to capture the interior of the studio model.

“Sometimes, like with old houses, people will put a time capsule inside the walls, but we didn’t find anything like that here,” not even a distinctive smell, which Collum noted was a good thing, since odors tend to mean deterioration, especially in plastics.

But the process of opening the model and taking it apart did reveal several surprises about the structure and history of this much loved 50-year old cultural icon. Collum shared five of these with Insider during a recent interview. 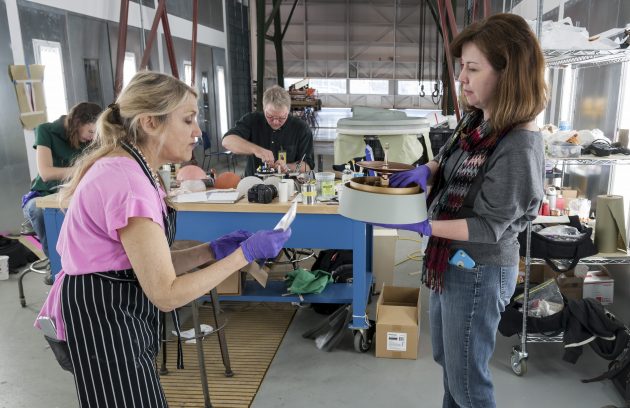 “The Enterprise is this total contradiction,” Collum reveals. “When the model was in our lab, it was scary because it looked so extraordinarily delicate. But it really had to hold up to sitting in a studio and being turned around at different angles, taken apart and brought back in. It’s meant to come apart in minutes.”

Most of the original model was held together with mortise-and-tenon joints, a 7,000-year-old carpentry technique that is strong yet allows for quick assembly and dismantling. Only two metal bolts fastened the distinctive upper saucer to the neck of the spacecraft. Later modifications added 4-inch carriage bolts to the joints, which conservators were able to carefully remove after X-ray analysis.

This is a short film showing the process of the detail paint work on the conservation of the original U.S.S. Enterprise studio model. The detail paint work was done between the 11 and 23 of April 2016, at the National Air and Space Museum’s Steven F. Udvar-Hazy Center in Chantilly, Va. (From William George on Vimeo).

2. Enterprise was built with a high level of craftsmanship

Usually, when model makers are constructing an object that is intended to be painted, lacquered or otherwise covered with materials that obscure its core structural components, the inside parts are rough-hewn, destined never to be seen. But on the Enterprise, where areas of flaking paint exposed parts of the model’s raw wood, Collum says he was staggered to see a finely finished surface beneath.

“The makers spent the time and effort to refine the core structural components to the extent that they didn’t have to use any filler,” Collum says. “It speaks to the mindset of people who love to create and design things like this—they know the next person who works on it will see this level of craftsmanship, and that they take pride in the things they create.” 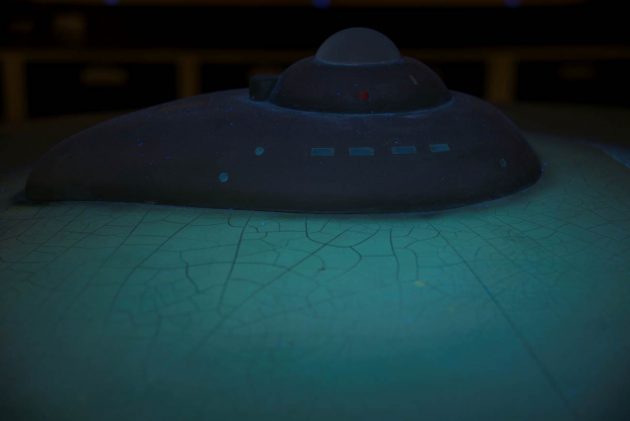 Malcolm Collum took this ultraviolet image of the external surface of the Star Trek Starship “Enterprise” studio model in the Museum’s Conservation Lab. The original paint on the ship’s primary hull (the “saucer”) is easily distinguished from paint applied during previous restoration work on the bridge. The original paint has started to show signs of “traction cracking” due to shrinkage with age. Note, that the brightness and contrast on this photo have been adjusted slightly to provide a better view of the details.

“We were surprised by how much original paint was still there,” Collum says. Normally, when objects like this get “restored,” previous layers of paint are stripped away to provide a fresh surface to work on. While some areas had been altered during previous restorations, for the most part, the original paint layer stratigraphy of the ship was still intact. Paint layers representing its five-decade history—a geological layering that showed what paints had been used in the 1960s, plus the 1974, 1984 and 1991 restorations, were all there. 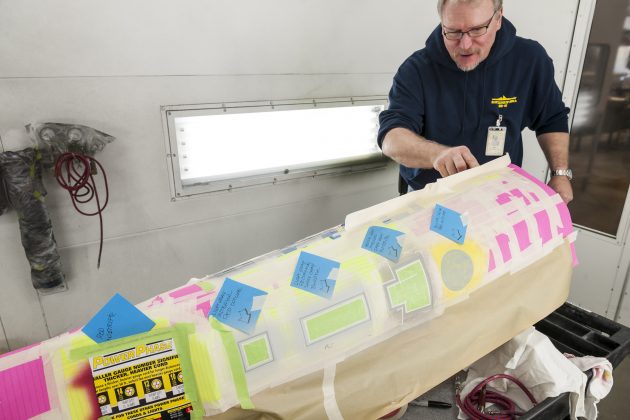 John Goodson of Lucasfilm’s Industrial Light & Magic shows off the complex masking used to create the markings on the bottom of the secondary hull of the “Enterprise” model. (Dane A. Penland photo)

4. The original lighting and special effects were extensive

Part of the magic of model train sets and dioramas is the animation of unexpected moving parts and twinkling of little lights in train cars and wayside buildings. The same care was put into Enterprise, but on a larger scale. Tiny incandescent “grain of wheat” light bulbs were threaded throughout the model on hair-like wires, some of which necessarily had to remain inside the ship because of the intricacy of the wiring design. Collum’s team was confronted with a steep challenge by having to reproduce the original effects with new lighting technology, a process he says involved “much gnashing of teeth.”

“The challenge amounted to how did they take what are basically Christmas lights and translate that into this concept of mysterious swirling energy?” Collum says. “[Show creator Gene] Roddenberry didn’t want a ship with rocket nozzles that had a blast of fire coming out the back, and it was part of our challenge to replicate that when all the original hardware was gone. It was all very clever stuff, but it goes far beyond putting a light in and hoping it will look good.”

5. Most of the model’s deep detailing was lost on television

Unlike today’s high-definition media, television and photographs of the 1960s and 1970s were incredibly grainy. That makes the level of detail on the surface of the model all the more perplexing and amazing, Collum says. Putting the ship on display as the modelers intended it to be viewed helps give insight into the fictional backstory of the ship in its universe. 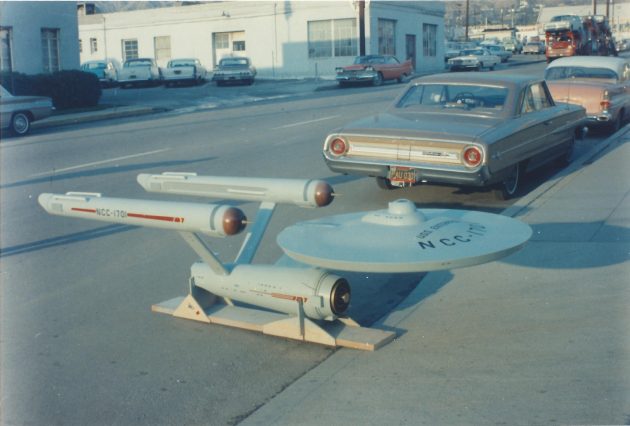 “When you look at the old images and shots from the TV series, the resolution is so degraded you don’t get a sense of how careful the modelers were with their artistic approach,” Collum says. “They wanted to capture the patina of having darted through the galaxies, but in reality, a lot of what they did was never going to be captured.”

Flight Operations on the USS Eisenhower