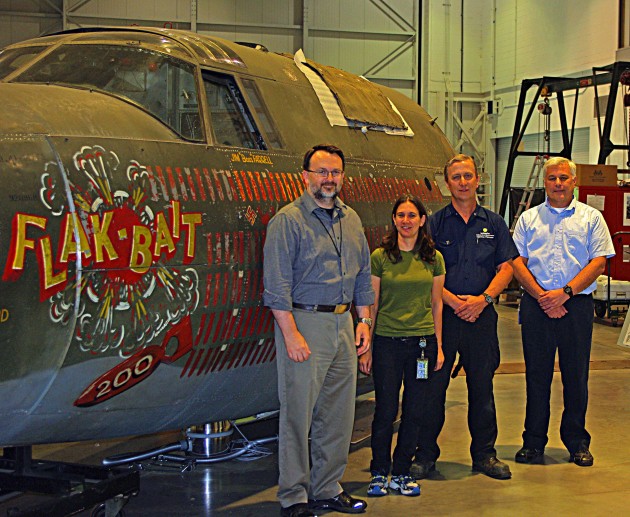 Ah, that new car smell. New plane smell is nice, too. Bright and shiny and fresh is good, right?

Sure, unless it is a very special World War II bomber, covered in hard-earned dirt and grunge, bullet holes and riveted repair patches. To remove these would be erasing classic historical battle scars.

And they’ve got to accomplish it in a way that can be reversed, in case future conservators determine there’s a better approach.

“There are planes that did see combat but were completely restored, so the essence of what they experienced during World War II is gone,” says Jeremy Kinney, curator of American military aviation at the Air and Space Museum. “Flak-Bait is a true time capsule of that time. We want to maintain its essence and authenticity.” 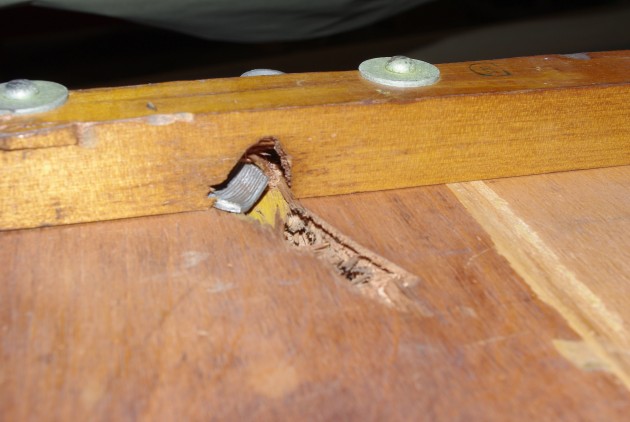 After retrieving an original floor board of the plane from storage as part of the reconstruction and conservation project, conservators found a previously undocumented surprise: a German round lodged in the panel beneath the radio operator’s seat. Though it will be hidden from view when the plane is completely reassembled, the project team feels it’s important to leave it in place as a testament to the battles the plane endured. (Photo by Michelle Z. Donahue)

Flak-Bait came to the Smithsonian in 1960 after being meticulously dismantled and sent home from Europe following the conclusion of the war. Surviving 207 bombing runs during its war service, it flew more missions than any other American plane in the conflict. The service life of a typical B-26 Marauder was between 15 and 20 missions, on average.

Stored for nearly two decades after its return, the forward section of the plane with its iconic nose art went on display in the museum in 1976. The rest of the plane—dents, patches, grease and all—stayed in storage. The plane was so well packaged for storage that the conservation team found bright red hydraulic fluid still inside one of the plane’s brake lines.

Now, it is time to put this WWII gem back together again, and this means giving it a meticulously judicious and often scientific cleaning.

It’s a tricky task. Microscopic analysis revealed strata of dirt and grit, laid down over time like sediment. Imagine having to discern the accumulated dirt of storage from the historically valuable mud from European airfields still splattered on the plane’s belly and wheel wells. Or cleaning away grimy dust yet preserving the oil-spattered patina ejected from the plane’s notoriously thirsty engines. One effort consisted of extracting a series of artifacts–Wrigley’s gum wrappers, cigarette butts, chaff shavings and bomb tags–from entrenched dirt built up in the seam between two bomb bay doors. 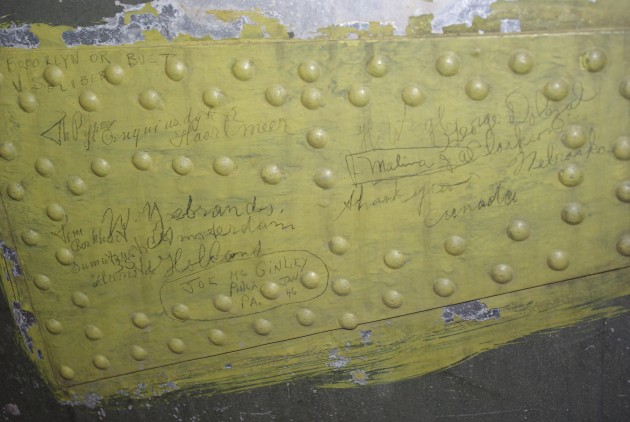 Many surfaces of the B-26 Marauder bear the penciled autographs of service members. Flak-Bait was a celebrity by the end of World War II; soldiers left their mark as proof they’d met a star. (Photo by Michelle Z. Donahue)

Because of the sheer size of the area that it covers, the biggest job involves Flak-Bait’s powdery body paint. To save hundreds of pounds of weight—which allowed the plane to carry additional men and munitions—it hadn’t been covered in primer prior to its 1943 factory paint job. That means today, the paint is flaking away from the plane’s aluminum body.

In the past, a common tactic for preparing modern artifacts for museum display was to make the object look like it did when new—cover the old paint with a fresh coat of paint in a matching color, polish up the grubby bits, maybe pull some dents, or fix an unsightly crack. Not so with Flak-Bait.

“If we were to completely reverse some things, we would be taking things off that people put on in 1945,” says Kinney. “We want to clean it up as it was found then.”

This includes preserving dozens of patched bullet and shrapnel holes, a record of the plane’s combat missions. Or thousands of penciled signatures by people who recognized the plane’s celebrity at the end of the war, and wanted to be part of posterity. 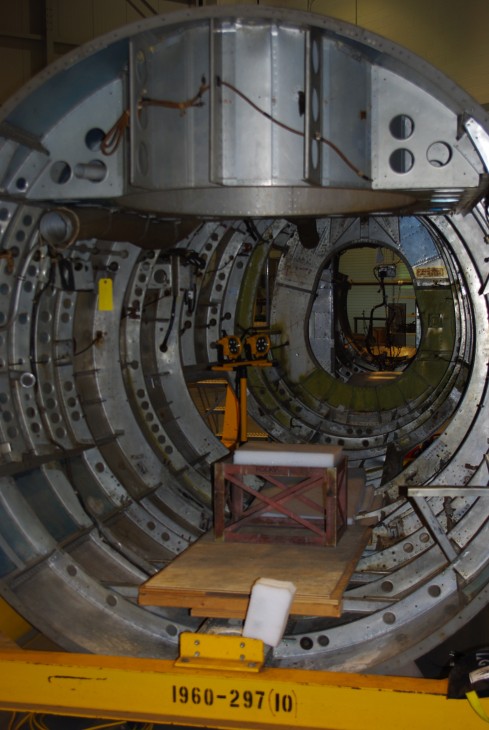 Like the rest of the plane, this central portion of Flak-Bait’s fuselage is carefully stripped down to the studs, allowing conservators to hunt down and correct corrosion, dirt and other hidden issues that might cause Flak-Bait to crumble over time. All parts removed are carefully recorded and photographed in order to replace them exactly as they were found. (Photo by Michelle Z. Donahue)

As conservators on the project, Horelick and Collum will start a methodical study of the plane’s various paints in the fall, both by analyzing it chemically, and under a microscope. To consolidate, or reaffix paint that’s threatening to flake off the underlying metal, Horelick must also determine what sort of material to use that will make it stay put, but won’t alter the covering’s appearance.

That process will take up much of the next year. Conservators will build mockup panels using materials as close to original as possible, then experiment with various materials for holding the paint together over time. To simulate how the plane will age in varying levels of light, temperature and humidity, researchers can use artificial aging chambers that mimic the array of stresses the plane will undergo during the next 100 years of exhibition.

And conservation doesn’t end when the project is finished. As the team makes decisions, they must consider how the plane will be cared for in the future—factors that affect decisions for the materials they choose to accomplish conservation today. 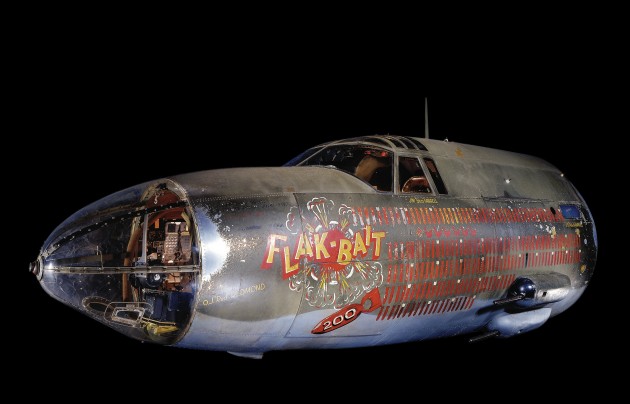 The front fuselage of Flak-Bait which served with the 449th Bombardment Squadron, 322nd Bombardment Group, Eighth and Ninth Air Forces. This famous B-26 flew from bases in England and, after D-Day (on which it flew two missions), from bases in France and Belgium. (Photo by Eric Long)

“It’s going to go on display, it will get dusty, kids will throw food and gum at it,” Horelick says. “We need to think about how it will be cared for in the future. We can’t just not do anything. We need to make sure we can preserve it.”

Because the work is so painstaking and happens alongside other long-term museum work, conservators don’t expect the plane to be ready for display until 2021.
“It’ll be tricky, but we’ll figure it out,” Horelick adds. “This is a totally trailblazing project.”