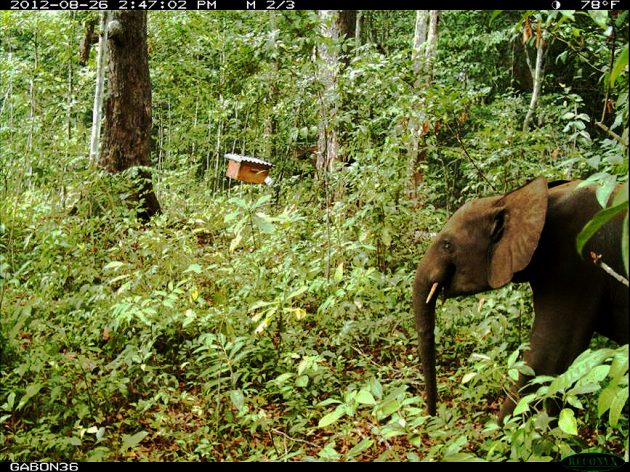 Strategically placed honeybee hives can deter African elephants from raiding crops, but the hives must be actively managed by beekeepers to work, according to a new study from the Smithsonian Conservation Biology Institute’s Gabon Biodiversity Program and partners, published recently in the online journal PLoS ONE. The activity level of bees coming and going from the hives is critical to effectively discourage forest elephants (Loxodonta cyclotis) the study reveals.

Previous studies with savanna elephants (Loxodonta africana) in Kenya showed that honeybee hives can be used to protect crops, but success has been inconsistent. This new research not only shows that the method is effective with forest elephants, but it provides a possible explanation for the inconsistencies in East Africa. 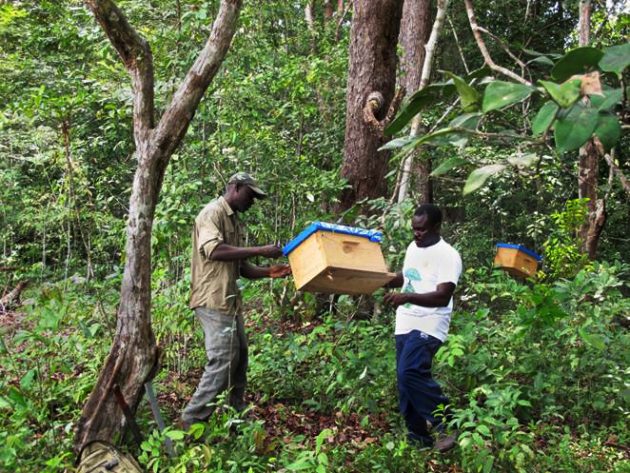 Steve Ngama, right, and colleague set up beehives near wild fruit trees in the jungle of Gabon.

“This study is the first to suggest that it’s the activity level rather than just the presence of hives that keeps elephants away,” says Lisa Korte, co-author on the paper and director of the Smithsonian’s Gabon Biodiversity Program, which helped fund and facilitate the research led by Steve Ngama from the Gabon National Center for Research and Technology.

Among the two species of African elephants, forest elephants are smaller, standing an average of eight-feet high compared to their larger cousins which average 10-feet in height. They have smaller, rounder ears and their tusks are straighter and more yellow. As with all elephants, demand for their ivory tusks has led to a catastrophic reduction in population. Between 2002 and 2011 alone, forest elephants have suffered a 62 percent decline in numbers. Gabon, considered the last stronghold for the species, is home to between 40,000 and 45,000 individuals, roughly half of all forest elephants left in Africa. 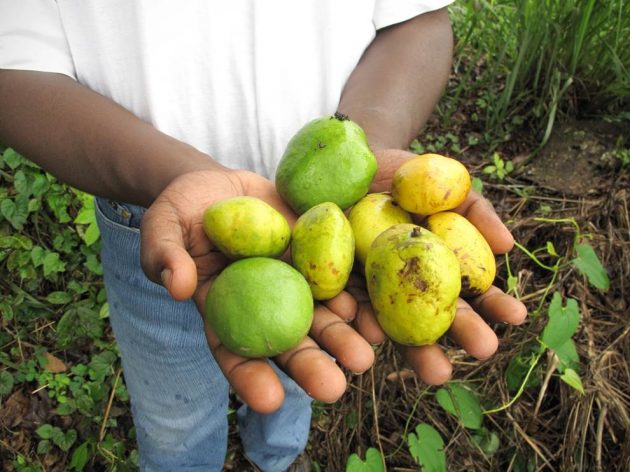 For the study beehives were hung on “Irvingia gabonensis” trees in the jungle. These trees have edible mango-like fruits that elephants like.

Although poaching is the primary cause of elephant decline throughout Africa, conflict with humans poses risks to both elephant populations and local villagers. Shrinking habitat forces elephants to wander into territories settled by humans. As herbivores that are especially fond of crop species, raiding elephants can destroy a farmer’s entire harvest in a single night. In communities where elephants threaten food supply, it can be difficult to instill the need for conservation, so curbing conflict between humans and elephants is a crucial component of efforts to protect the animals.

In their study, Ngama’s team hung beehives on ten trees with fruits commonly eaten by forest elephants. From November 2011 to February 2013 they recorded elephant activity with camera traps set 10 and 20 meters from the experimental trees and control trees with no hives. As the hives were naturally colonized by local honeybees (Apis mellifera adansonii) the scientists made weekly video recordings of bee activity. They counted each time a bee entered or exited the hive as one movement. 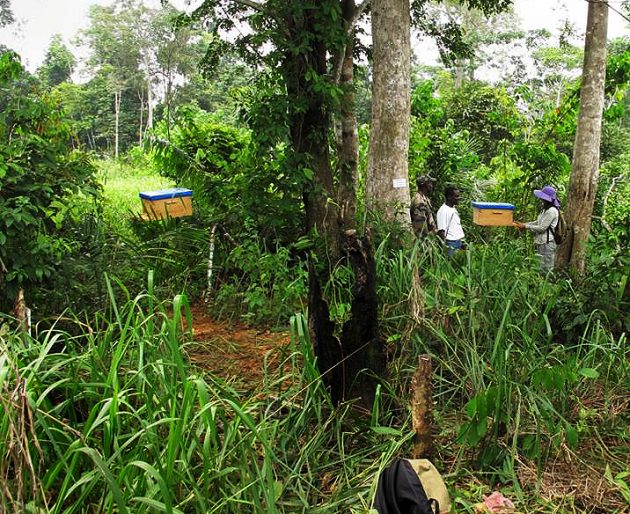 A beehive is placed near a wild Irvingia tree in the Gabon jungle by researchers, including Steve Ngama, center, and Lisa Korte, right.

Their results showed that elephant visits to trees with hives decreased when hive activity reached 40 bee movements per minute. By 70 bee movements per minute, elephants avoided trees with hives altogether. The researchers also found that as activity levels rose, honey production fell because bees were shifting their resources from producing honey to producing bees for defense.

For a Gabonese farmer, hives must produce harvestable honey in order to be worth the cost of the hives and the effort it takes to tend them. The study concluded that optimum bee activity for both deterring elephants and producing honey may be between 40 and 60 bee movements per minute.

“We don’t know what the decision factor is from the elephant’s point of view,” Korte says. “We don’t know what they’re cluing in on, but it could mean elephants are able to perceive the defensive ability of active beehives.” It had been assumed that the hum and scent of a hive alone served as a deterrent, but those factors may vary with hive activity. Perhaps, for example, a strong honey smell signals to the elephants that there is less bee activity and therefore less risk of being stung.

Although more studies are needed to better understand the relationship between elephants and honeybees, this work demonstrates that with a certain amount of investment and maintenance, beehives can be an effective tool for reducing conflict between forest elephants and humans.