Mexico is the fourth largest honey producer and fifth largest honey exporter in the world. A Smithsonian researcher and colleagues helped rural farmers in Mexico to quantify the genetically modified organism (GMO) soybean pollen in honey samples rejected for sale in Germany. Their results appeared Feb. 7 in the online journal, Scientific Reports. 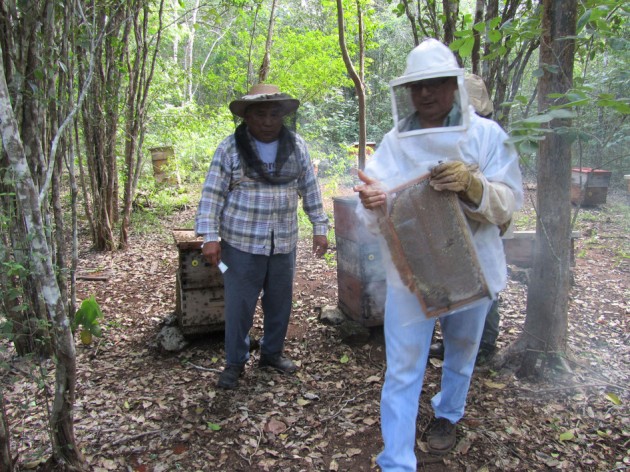 An apiary owner and technician stand with a newly removed hive frame containing pure honey sealed with beeswax. It is one of thousands of small, local apiaries maintained using Africanized honey bees now operating in the Neotropics. (Photograph by R. Villanueva-Gutiérrez)

David Roubik, senior staff scientist at the Smithsonian Tropical Research Institute, and colleagues developed the ability to identify pollen grains in honey in Panama and in Mexico during the 1980s and 1990s when they studied the effects of the arrival of Africanized bees on native bees. “Nobody else can do this kind of work in the ‘big field’ environment and be confident that what they are seeing are soybean pollen grains,” said Roubik. They found that six honey samples from nine hives in the Campeche region contained soy pollen in addition to pollen from many wild plant species. The pollen came from crops near the bee colonies in several small apiaries.

Due to strict European regulations, rural farmers in the Mexican Yucatan face significant price cuts or outright rejection of their honey crop when their product contains pollen from GMO crops that are not for human consumption. The regional agricultural authorities, furthermore, seemed unaware that bees visited flowering soybeans to collect nectar and pollen.

“As far as we could determine, every kind of GMO soybean grown in Campeche is approved for human consumption,” said Roubik. “But honey importers sometimes do no further analysis to match GMO pollen grains with their source.”

“We cautiously interpret these results as significant for elsewhere in Mexico where some five times the GMO soy grown in Campeche is found and beekeeping is alive and well, not to mention the rest of the world,” said Roubik. “Bee colonies act as extremely sensitive environmental indicators. Bees from a single colony may gather nectar and pollen resources from flowers in a 200-square-kilometer area. With an economy based on subsistence agriculture associated with honey production, the social implications of this shift in the status of honey are likely to be contentious and have profound implications for beekeeping in general.”