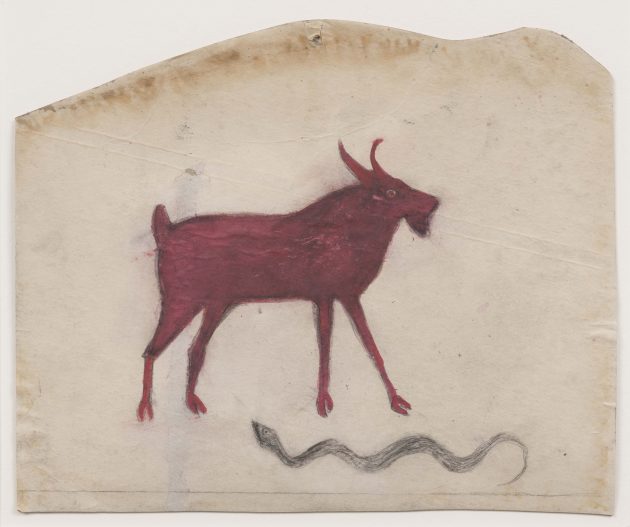 “Untitled (Red Goat with Snake),” by Bill Traylor about 1939 – 1942. Opaque watercolor and pencil on cardboard. (Smithsonian American Art Museum, Gift of Judy A. Saslow, image courtesy of Judy A. Saslow)

Drawn on a misshapen, discolored piece of cardboard, a red goat and a black snake eye each other in tense contemplation. The goat’s red color symbolizes fear and high emotion and his eyes are wide in terror. The snake slithers by; maybe he will deliver a deadly strike, perhaps he passes without incident. In a way that is subtle but clear, artist Bill Traylor conveys the tension African Americans lived with daily.

Bill Traylor’s (1853/54-1949) “Untitled (Red Goat with Snake)” is one of six Traylor artworks just acquired by the Smithsonian American Art Museum from the collection of Judy Saslow in Chicago. They will be featured in “Between Worlds: The Art of Bill Traylor,” the first retrospective exhibition for an artist born into slavery, which will open at SAAM on March 16, 2018.

“Traylor lived a life that spanned slavery, Reconstruction, Jim Crow, the Great Migration, and foreshadowed Civil Rights,” says Leslie Umberger, curator of folk and self-taught art at SAAM. “He experienced a lot, witnessed a lot, and is the only known artist of his era to make a sizeable body of images that both reflect and embody black culture of his time and place.” 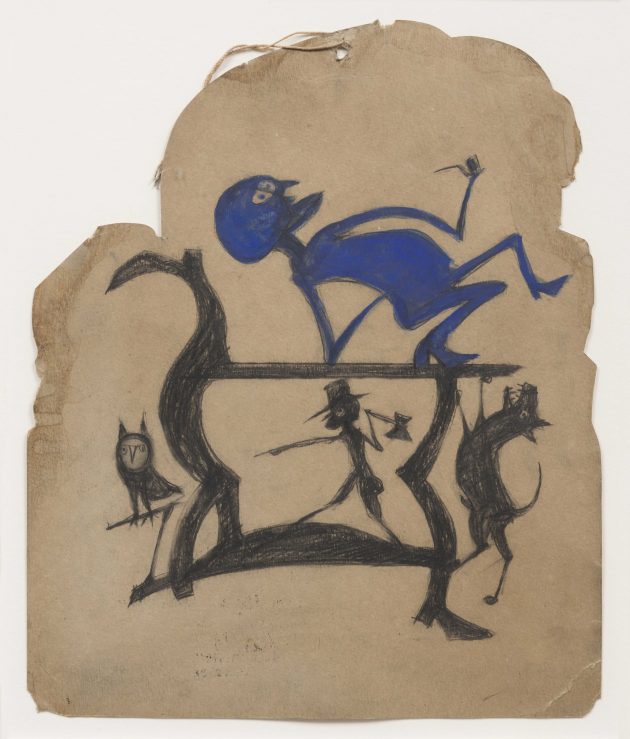 While other handmade artistic objects by former slaves do exist, Umberger explains that they are more frequently craft-related and skill-based forms that grew out of plantation practices and everyday needs, such as pottery, baskets, and quilts. Traylor made his paintings and drawings in the last decade of his life, when he was living on the urban streets of Montgomery in a black section of town. “He was both looking back and looking at what was right front of him,” Umberger says. “Life in Montgomery was radically different than all those decades on the farm. African American culture was still suppressed, but it was also flowering in music, fashion, and food—and in this setting Traylor was able to become an artist of remarkable vision.”

Although Traylor’s work garners a more widespread appreciation today, his artistry has long been admired by fellow artists. The painter Charles Shannon, a white contemporary of Traylor’s and a member of the progressive coalition, the New South, was an influential champion of Traylor’s work, buying pieces from him between 1939-1942 and even taking some to a curator at the Museum of Modern Art in New York City. It wouldn’t be until the 1980s, however, that Traylor’s work was first understood as being important in its own right. The post-Civil Rights world demanded a broader array of artists and a more diversified American story. Traylor first captivated lovers of folk and self-taught art, but now he has a much wider appeal and is recognized as one of the nation’s most significant artists. 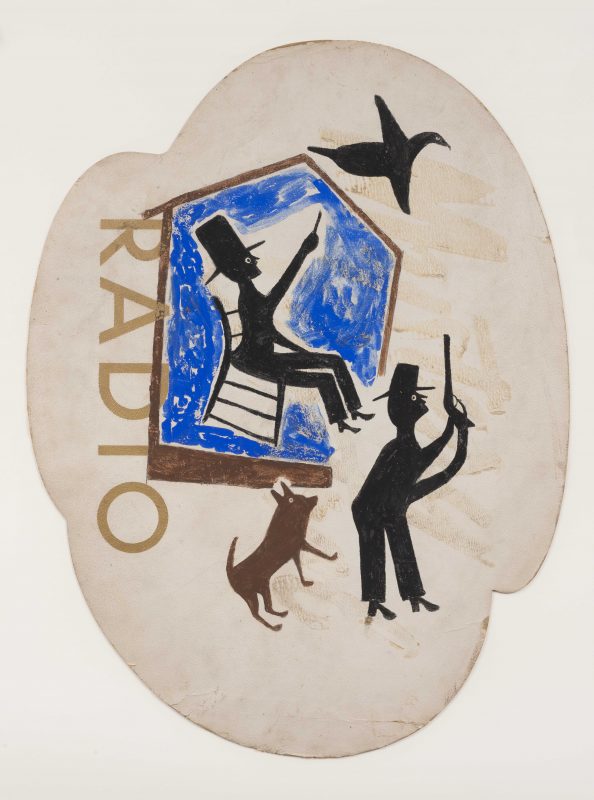 “Between Worlds” will explore Traylor’s trajectory as he learned the basics of drawing, became deft at drafting careful narratives, and finally became expert at depicting boldly colored and stylized scenes that pack a powerful punch. “Traylor’s images move from being a little bit clumsy and tentative to being very concise and powerful,” Umberger says. She also points out that the artist knew how to depict the subtle characters of animals and was adept at using allegory to address human dynamics that were hard to speak openly about in the Jim Crow South. Umberger warns against presuming that a self-taught, illiterate artist such as Traylor is naïve, or makes interesting art by accident. “Traylor’s work is filled with purpose and intent.” 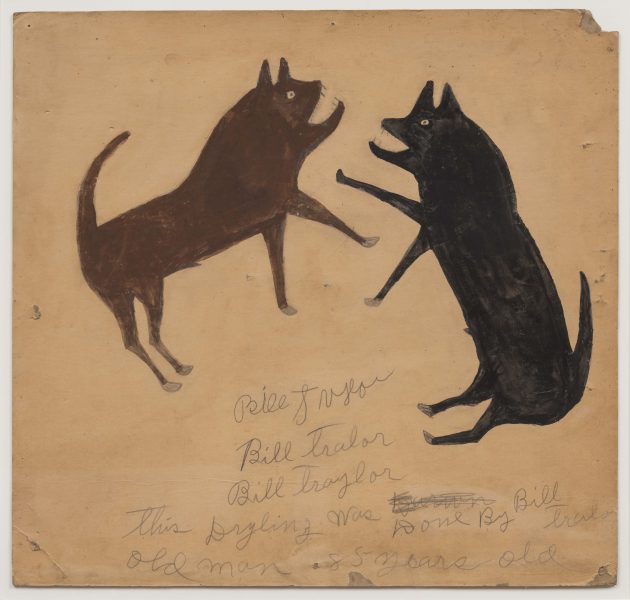 A dog fight, for example would not have been a topic without significant subtext. The snarling black and brown dogs seen in a painting such as “Untitled (Dog Fight with Writing)” may reference race relations on one level, while on another they depict the fearsome threat of dogs trained by plantation owners to hunt runaway slaves, and, after Emancipation, any African American who ran afoul of community whites. Traylor’s inclusion of popular culture, such as images of African-American athletes, characters from movie posters or the popular press, clearly convey that he paid close attention to the rapidly changing world around him.

A lot of facts surrounding Traylor’s life are missing, and this makes a difficult task for those who study him; there is no easy, linear narrative to serve as a backdrop to his art. But what is not missing is his work itself, and Umberger believes that the best strategy is to let the art tell its own story. 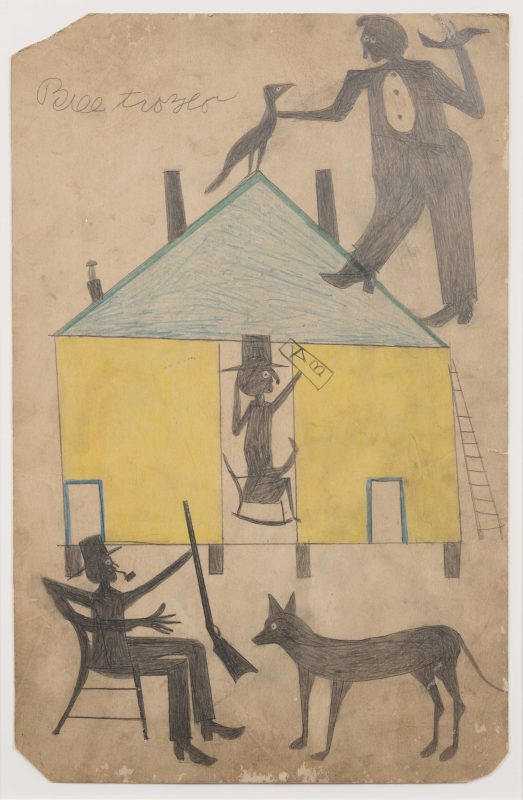 “By bringing together a large number of related works in this exhibition, we can take a close look at Traylor’s recurring characters and settings, we can examine his themes, and the way he moves back and forth between abstraction and representation,” Umberger explains. “We still have to read between the lines, but the works come together in a powerful way.” Umberger stresses that it is important for the SAAM to position Traylor among a wider array of artists and clearly say, “This is one of the important American artists of all time—not only in this specific category or in that one—but in the history of American art.”

(This article is based on an interview between Leslie Umberger, curator of folk and self-taught art at SAAM, and Sabrina Greene, writer in the Smithsonian Office of Communications)