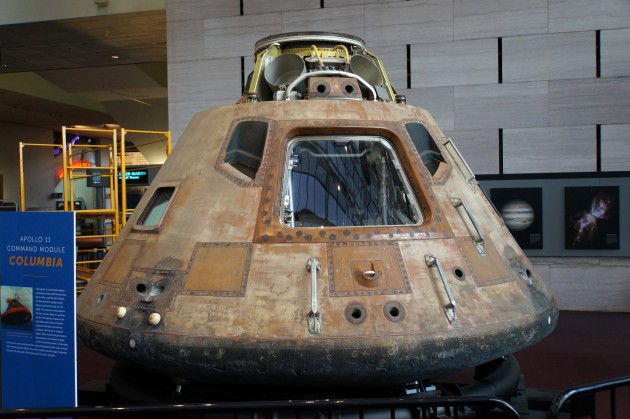 So it looks like landing on the moon wasn’t the only thing the crew were doing inside the Apollo 11 Command Module Columbia in July of 1969. Staff from the National Air and Space Museum in Washington, D.C. and the Smithsonian’s 3D Digitization Program have discovered writing on the interior walls of the command module―something that was previously unknown to the Smithsonian. The astronaut graffiti, unseen for almost 50 years, includes notes, figures and a calendar presumably written by the crew during their historic flight to the moon.

The writing gives a unique look into the first mission to land on the moon, crewed by Neil Armstrong, Buzz Aldrin and Michael Collins between July 16 and 24, 1969. The discovery of this “space graffiti” will enable the museum’s curators to compile a more complete account of how the missions were conducted.

“As curator of what is arguably one of the most iconic artifacts in the entire Smithsonian collection, it’s thrilling to know that we can still learn new things about Columbia,” says Allan Needell, curator of space history at the museum. “This isn’t just a piece of machinery, it’s a living artifact.”

The curators at the National Air and Space Museum have been working with the Smithsonian’s 3D Digitization Program to scan the command module in 3D to create a high resolution interactive model of the entire spacecraft. This highly detailed model will allow researchers and the public to explore the entire craft, a feat not possible when viewing the artifact in the museum. The model will be used to produce an interactive display in the museum’s exhibition “Destination Moon,” scheduled to open in 2020.

“We want to allow anyone with an internet connection the ability to experience what is was like to sit in the cockpit of the Apollo Command Module,” said Vince Rossi, 3D imaging specialist with the Smithsonian’s 3D Digitization Program. “Beyond virtually navigating the interior of the Command Module our goal is to use this 3D model as a storytelling tool for the National Air Space Museum Curators and Conservators using our 3d viewer on 3d.si.edu.”

Because of the complicated nature of this scan, the Smithsonian 3D team brought in its technology partner, software company Autodesk Inc. Autodesk deployed specially designed equipment to scan the artifact and its advanced software was able to process complex data from multiple 3D capture devices to create one highly detailed and accurate model.

“Our goal is to launch the Command Module to the public in the summer of 2016. Stay tuned,” said Rossi.

The Smthsonian’s 3D Digitization Program has been working to digitize the Apollo 11 Command Module “Columbia” that is currently on display at the National Air and Space museum. “Columbia” was the living quarters for the three-person crew during most of the first manned lunar landing mission in July 1969.