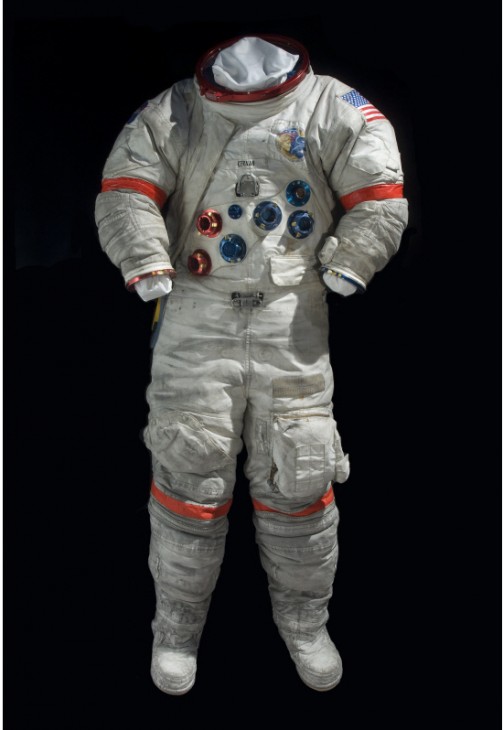 Apollo 17 was the last Apollo mission to land men on the moon. It was launched by a Saturn V rocket Dec. 7, 1972, carrying Commander Eugene Cernan, command module pilot Ron Evans and lunar module pilot Harrison Schmitt, the only geologist to walk on the moon.

While Evans remained in lunar orbit in the command/service module, Cernan and Schmitt landed lunar module “Challenger” in the Taurus-Littrow region of the moon. They spent three days conducting three periods of extra-vehicular activity, or moonwalks, where they collected lunar samples and deployed scientific instruments.

While collecting a record 110 kilograms of lunar samples, they spent 22 hours outside of the lunar module and drove the lunar roving vehicle 35 kilometers. The crew landed in the Pacific Ocean Dec. 19, 1972.

Cernan still holds the distinction of being the last man to walk on the Moon; no humans have visited the moon since Dec. 14, 1972. This is Cernan’s spacesuit—the last spacesuit worn on the moon. When combined with the portable life-support system and other components making up the extra-vehicular mobility unit, it weighed about 185 pounds on Earth. It was transferred to the Smithsonian’s National Air and Space Museum from NASA in 1974.