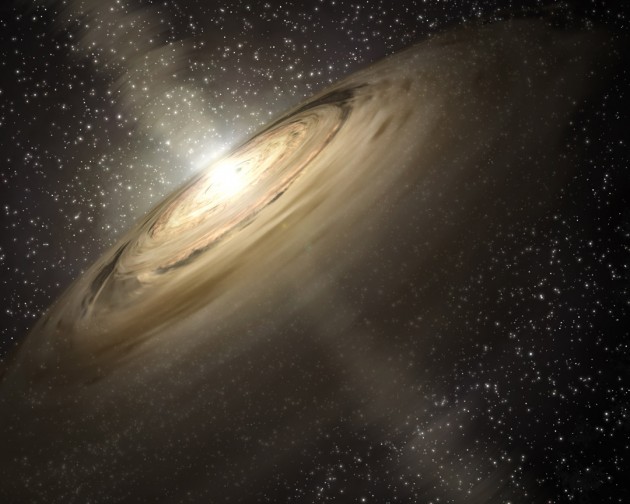 This artist’s concept illustrates a solar system that is a much younger version of our own. Dusty disks, like the one shown here circling the star, are thought to be the breeding grounds of planets, including rocky ones like Earth. (Image courtesy NASA/JPL-Caltech/T.Pyle-SSC) .

When astronomers study protoplanetary disks of gas and dust that surround young stars, they sometimes spot a dark gap like the Cassini division in Saturn’s rings. It has been suggested that any gap must be caused by an unseen planet that formed in the disk and carved out material from its surroundings. However, new research shows that a gap could be a sort of cosmic illusion and not the sign of a hidden planet after all.

“If we don’t see light scattered from the disk, it doesn’t necessarily mean that nothing is there,” says lead author Til Birnstiel (Max Planck Institute for Astronomy), who conducted the research while at the Harvard-Smithsonian Center for Astrophysics (CfA).

The researchers studied disks that shine in visible or near-infrared wavelengths due to scattered, or reflected, light. (In contrast, radio or millimeter telescopes pick up emission directly from the disk itself.)

Scattered light comes from starlight that bounces off tiny particles about the size of cigarette smoke. Those particles initially suffuse the protoplanetary disk, but undergo changes over time.

Small particles can clump together to form larger and larger objects, eventually growing into full-fledged planets. However, when particles collide they sometimes break apart instead of sticking together. Particles can also move closer to or farther from the star in a process called migration. The team modeled these processes using the Smithsonian’s Hydra supercomputer cluster.

“Growth, migration and destruction can have tangible, observable effects,” explains co-author Sean Andrews of the CfA. “Specifically, these processes can create an apparent gap in the disk when the small particles that scatter light are cleared away, even though larger particles still remain.”

Birnstiel offers the analogy, “Throwing a stone in the air doesn’t obstruct my view, but throwing a handful of dust in the air does. Similarly, as small particles grow bigger in some areas of the disk, they don’t obstruct our view any more and those regions appear empty.”

So how can astronomers tell if a gap in a protoplanetary disk is real, or simply an area where pebbles reign and dust is gone? The key is to make observations at longer wavelengths of light that can pick up the pebbles.

To that end, the team will conduct observations of a well-known example of a disk with a gap, TW Hydrae, with the Atacama Large Millimeter/submillimeter Array (ALMA). If they find large grains within the apparent gap, that will suggest there is no planet. However, if the gap appears empty in these observations as well, then the evidence will be stronger for the existence of an unseen planet.

This work has been published in the Astrophysical Journal Letters.