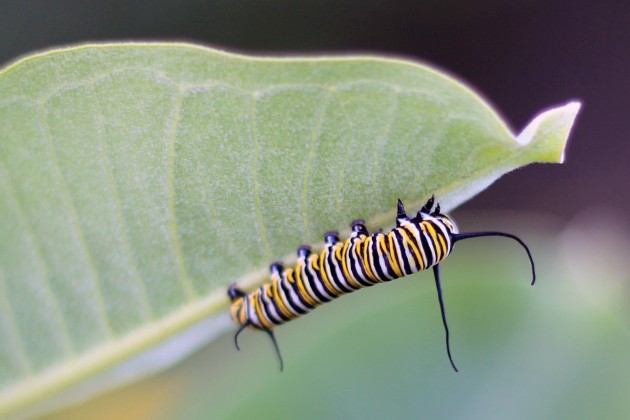 The monarch caterpillars seen in late summer are part of the generation that migrates to Mexico and overwinters there. (Photo by Courtney Celley/USFWS)

Heated gardens were used to raise monarchs (Danaus plexippus) from third instar caterpillars to pupae under warmer temperatures than normal along with their butterfly weed (Asclepias tuberosa) host plants. An increase of 1 degree Celsius, the scientists determined, reduces the monarch’s pupation time by roughly half a day. As monarchs go through multiple generations during their summer migration north, a rise of two or three degrees Celsius may provide time for added generations of monarchs. 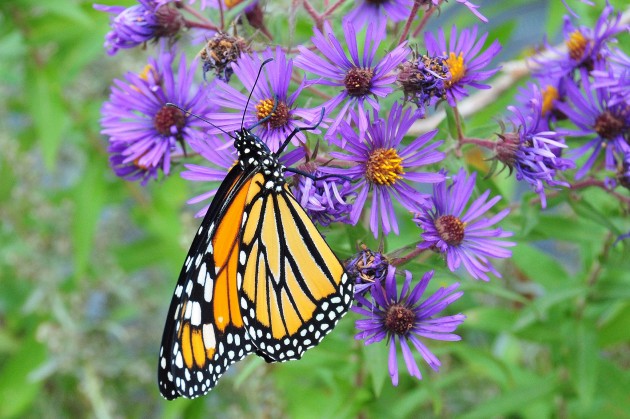 “We found that monarchs grew faster and developed at a more rapid rate at higher temperatures,” explains biologist Nathan Lemoine of Colorado State University, head researcher on the project. “In future climates, time to pupation may be reduced by one to three days, depending on location and the severity of warming.” This translates into more time over the course of the summer for additional generations of monarchs.

The study’s findings are consistent with other studies showing slightly warmer temperatures hasten larvae development in butterflies. Higher temperatures had no effect on the weight of the pupae, the survival rate of the monarchs or the nutritional quality of butterfly weed, Lemoine adds.

Each spring monarchs begin moving north from their wintering grounds in Mexico and go roughly as far as Texas, before they mate and lay their eggs, Lemoine says. The eggs develop into butterflies that make another hop north, mate and lay eggs. Their major flyway is through Iowa, Kansas and Nebraska but they also travel a route that goes along the East Coast. 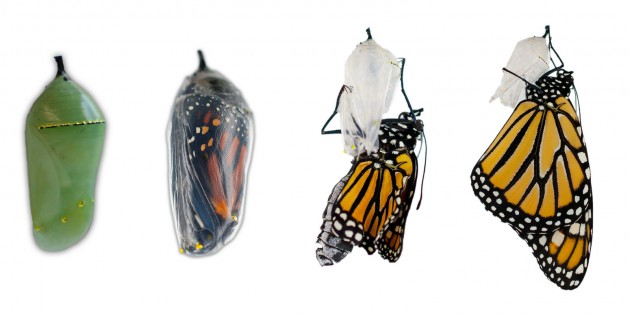 “Monarch larvae today take about two weeks to make a chrysalis. The chrysalis takes another two weeks to open and the adult monarchs live from two to five weeks,” Lemoine says.

Eventually, after a number of generations have “hopped” north–some reaching as far as Michigan, Maine and Canada–cooler temperatures and shorter days in late August and September trigger the last generation to stop mating and fly all the way back to Mexico. In Mexico this generation overwinters and in spring they head north.

Through faster growth, “higher temperatures may increase the number of monarch generations able to arise during the summer breeding season,” Lemoine explains. In places with cool temperatures this might actually facilitate monarch development.

While climate change may be beneficial in this way to monarchs, there are also potential drawbacks. Larger effects such as drought, distribution and time of appearance of their host plant, and climate triggers to their mating and migration are cause for concern.

This study shows only one area of the monarch’s life that may change with rising temperatures, Lemione says. “Conservationists must understand how climate change will affect all parts of the monarch life cycle in order to protect this important species.”

Other authors of the paper, “Effects of in situ climate warming on monarch caterpillar (Danus plexippus) development,” include Jillian Capdevielle of the University of California, Berkeley; and John Parker of the Smithsonian Environmental Research Center.