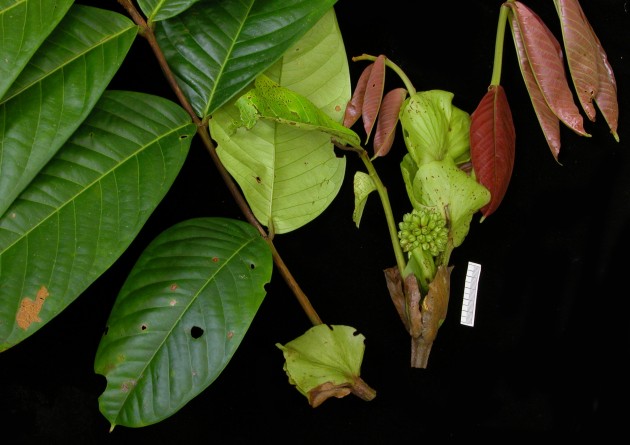 This plant, “Inga spiralis,” in the bean family (Fabaceae), is only found in Panama. Many areas in the tropics have still never been thoroughly explored by botanists. (Photo by Carmen Galdamez)

A global analysis raises the minimum estimated number of tropical tree species to at least 40,000–53,000 worldwide in a paper appearing in Proceedings of the National Academy of Sciences, whose coauthors include researchers from the Center for Tropical Forest Science–Forest Global Earth Observatory (CTFS–ForestGEO) and the Smithsonian Tropical Research Institute (STRI). Many of these species risk extinction because of their rarity and restriction to small geographic areas, reaffirming the need for comprehensive, pan-tropical conservation efforts.

Although scientists could confidently say “the tropics are diverse,” the answer to “how diverse” still remains open to speculation. Tropical tree identification is notoriously difficult—hampered by hard-to-access terrain and the sheer number of rare species. Much of the data came from CTFS–ForestGEO study sites, where standardized pan-tropical survey methods create opportunities to much more accurately gauge tropical diversity.

By raising the estimated minimum number of tree species in the world, estimates for the number of insect and microbe species associated with tropical trees also increases, placing an even higher premium on protection of these forest ecosystems. 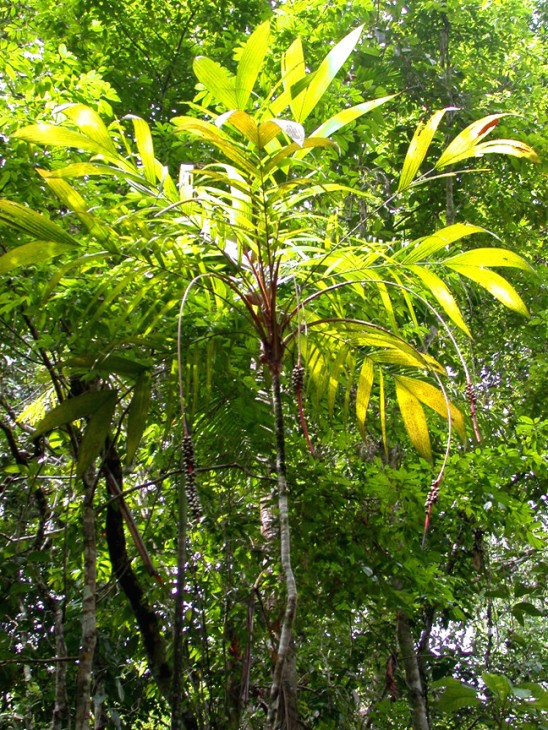 The palm genus “Calyptrogyne” is native to Central America. Eleven of the 17 known species, like “Calyptrogyne costatifrons” (shown here), are endemic to Panama. Because many tropical plant species are only found in small, hard-to-reach areas, the total number of plant species in the tropics is still unknown. (Photo by Rolando Perez)

Coauthor William Laurance, senior research associate at STRI and Distinguished Research Professor at James Cook University, explains that the “stunningly high tree diversity” of the tropics is represented by thousands of rare species, whose sparse populations may not be sustained in the long term by isolated protected areas.

“This study once again validates a strategy of making forest reserves as big as possible, and also trying to prevent their isolation from adjoining areas of forest,” Laurance said.

The study’s lead author Ferry Slik, professor at Universiti Brunei Darussalam, collaborated with more than 170 scientists from 126 institutions to study a dataset composed of 207 forested locations across tropical America, Africa and the Indo-Pacific. Each forest plot contains at least 250 individual trees identified to species, ensuring comprehensive coverage of the total species diversity in each geographical area.

Among their findings, the researchers note that, contrary to previous assumptions, the Indo-Pacific tropics contain as much species diversity as tropical America—at least 19,000 species. Both tropical America and the Indo-Pacific are about five times as species-rich as Africa, whose forests are hypothesized to have experienced extensive extinction events during the Pleistocene era of glaciation and climate change. All three regions contain distinct tree lineages reflecting unique evolutionary histories.

Researchers note that their calculations excluded some 10 percent of unidentifiable trees in a dataset comprising 657,630 individuals. Since these trees could reasonably represent rare or previously unknown species, there’s a high likelihood that the world’s estimates of total tree species diversity will keep increasing as more of the tropics are surveyed and studied. Laurance notes that the CTFS–ForestGEO network continues to grow, adding new forest plots not just for basic research but also “as barometers of the long-term effects of global change on forest communities.”

Meanwhile, as deforestation and development increase the extinction risk for many unique species, lessons may be learned from Africa’s reduced tropical diversity. When forest areas shrink, rare species are usually the first to disappear. Consequently, even if the extinction pressure is eventually lifted, a much more limited palette of species remains to repopulate the region. While the tropics are vast and diverse, their individual components are irreplaceable.

CTFS–ForestGEO is a global network of forest research plots and scientists dedicated to the study of tropical and temperate forest function and diversity. The multi-institutional network comprises more than 60 forest research plots across the Americas, Africa, Asia, and Europe, with a strong focus on tropical regions. CTFS–ForestGEO monitors the growth and survival of approximately 6 million trees and 10,000 species. Website: https://www.ctfs.si.edu/.