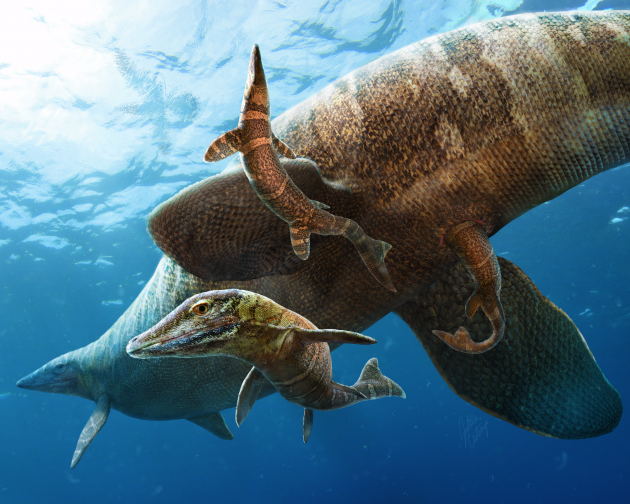 A Clidastes mosasaur gives birth to live young in the open ocean 85 million years ago. (Illustration by Julius Csotonyi)

A case of mistaken identity turned out to be the key for proving that a prehistoric aquatic reptile did not lay eggs, but rather gave birth to live young in the warm seas of the Mesozoic.

Field saw the tiny jawbone pieces in the box—complete with teeth—and realized they very clearly belonged to a baby-sized version of a swimming reptile known as a mosasaur. Field had worked with adult mosasaur specimens during a paleontological dig earlier in his career. 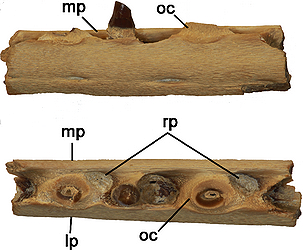 Portions of the left and right jawbones from a very young species of mosasaur from the Mesozoic Era. These fragments are about 2 centimeters long.. (Photo courtesy Daniel Field)

What’s more, these specimens were collected from deposits from the prehistoric Bear Paw Sea, which once stretched from the Arctic to the Gulf of Mexico. That  gives strong credence to two previous proposals: that mosasaurs lived in the open ocean, not lurking exclusively near coastlines, as previously believed; and that they gave birth to live young.

“It really speaks to the value of the fossil record, that only the fossil record can provide direct evidence of the history of life,” Field says. “It helps us understand what these long-extinct animals would have been like as living, breathing creatures.”

Field added that the marine lizard’s reproductive strategy raises the question of whether mosasaurs and their like were truly cold-blooded in the classic sense. Giving birth to ready-to-swim young in the ocean doesn’t translate to being slow and sluggish like modern reptiles, Field notes.

Collected in Kansas in the late 1800s from the famous Niobrara Formation, the baby mosasaur bones strongly resemble the jaws of unrelated toothed birds in size and shape, and were found in an area where other fossilized birds had been collected. They’d probably been mistaken as bird bones simply due to their size.

Field’s expertise with birds and prior experience with mosasaurs enabled him to identify a distinguishing bulge on the jawbone samples, a structure absent in prehistoric toothed birds. The jawbones belong to a species of mosasaur called Clidastes. Adult specimens have been found 9 feet in length, but these jawbones came from babies no more than 12 inches long.

Baby “Clidastes liodontus” mosasaurs are estimated to have been around 12 inches at birth, based on the 9-foot length of full-grown adults. (Graphic courtesy of Daniel Field)

Fossils of baby mosasaurs have been found before, but all were etched and pitted as if by acid, indicating they’d been transported to their final resting places in the belly of a predator. The Yale bones showed no such evidence, meaning they’d died of other causes. Field’s discovery fills a puzzling gap in the fossil record.

“Direct evidence of baby mosasaurs in an open marine setting had not yet been found, which is surprising because they had turned up for other groups of marine reptiles,” Field says.

Because of their body structure, researchers had suspected that mosasaurs did not haul themselves out onto a beach to lay eggs, similar to how sea turtles reproduce. Fossilized remains of other prehistoric swimmers, the ichthyosaurs, have been found in the process of giving birth. Some modern relatives of mosasaurs, including monitor lizards and some species of snakes, also skip the eggs.

Why are baby mosasaur fossils rare? Fields points to a variety of likely reasons, including collection bias. Turn-of-the-century fossil hunters were more interested in large, fearsome skeletons for their museums’ collections. They possibly disregarded smaller bones as uninteresting. Also, small-bodied organisms often aren’t preserved as well in the fossil record, due to factors including predation, scavenging, or the bones being smashed and scattered before they can fossilize.

“These fossils have basically waited in the bowels of the Yale Peabody museum for their time to shine,” Field laughed. “People talk about the second round of fossil hunting—everybody knows that paleontologists go into field to dig stuff up, but fossil hunting in museum collections can lead to new insights, too.”

Field reported his findings in a recent issue of the journal Palaeontology.