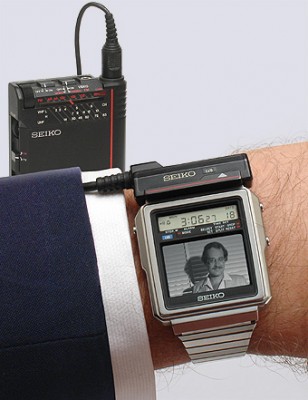 “We may think of the Apple Watch as new and exciting but it is not the first effort to put the latest technology on our wrists,” explains Carlene Stephens, curator of the watch collection at the Smithsonian’s National Museum of American History. Take, for example, Seiko’s “Watch Man,” a TV wristwatch that first sold in the U.S. in 1983 for $500.

About the size of a regular wristwatch, the Watch Man allowed you to watch television anywhere providing you also wore a sizeable battery pack, receiver and headpiece. Receiver and battery were carried separately in a bag or pocket. A connecting cable—which also served as a TV antennae—snaked through the sleeve of your jacket and connected to the wrist screen.

“It didn’t really catch on,” Stephens explains. “The watch itself wasn’t all that big but carrying around that battery pack was not popular.”

World War II marked a turning point in the watch industry. “Before World War II the wristwatch was all mechanical, but after, piece by piece, wristwatch insides were reinvented. And the very first piece to go was the power,” Stephens says. “Wind-up watches ran on the power of an unwinding spring which was actually a weak point in the system because it influences how accurately the watch will run. After WWII there was a huge effort to make a battery small enough to fit in a watch.” 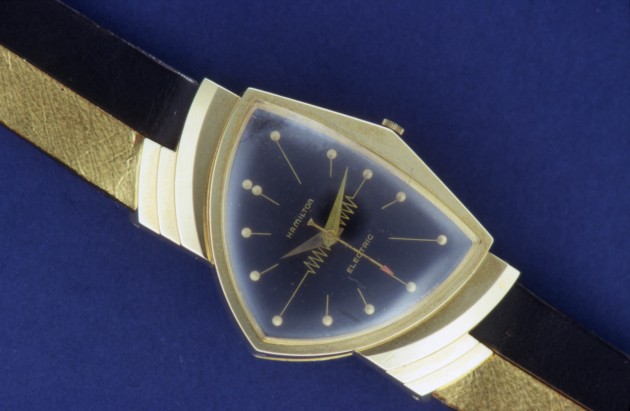 Hamilton Ventura, one of the very first electric watches to run on a battery. (Smithsonian Institution photo)

The Hamilton Ventura, one of the very first electric watches to run on a battery, was released in 1957 and sold for $200. “Its designers faced a dilemma,” Stephens says. “Should they make it look weird and wonderful and futuristic, or like a watch people are expecting a watch should look like?” The Ventura’s now classic triangular dial was an outward reflection of the historic milestone invisibly powering it inside.

Next, companies began competing for greater accuracy—a big selling point for new watches, Stephens says. As a result, the next interior watch part to go was the balance wheel oscillator, which regulates a watch’s time. Bulova replaced the balance wheel with a vibrating tuning fork that was more accurate. 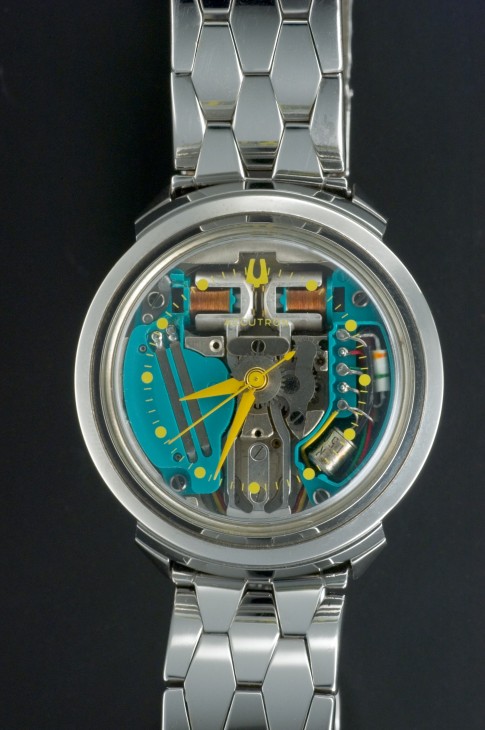 The Bulova Accutron Spaceview, a wristwatch released in 1960, had a clear dial allowing you to see the metal tuning fork inside. “Like the Ventura, it was the hot desirable watch of its day,” Stephens says.

Bulova’s tuning fork, however, had a bigger impact. “It was a catalyst that launched investigations by other watch companies into alternatives to the metal tuning fork,” Stephens explains. “What eventually emerged at the end of the 1960s was the quartz tuning fork. Most watches made today are electronic quartz watches.” 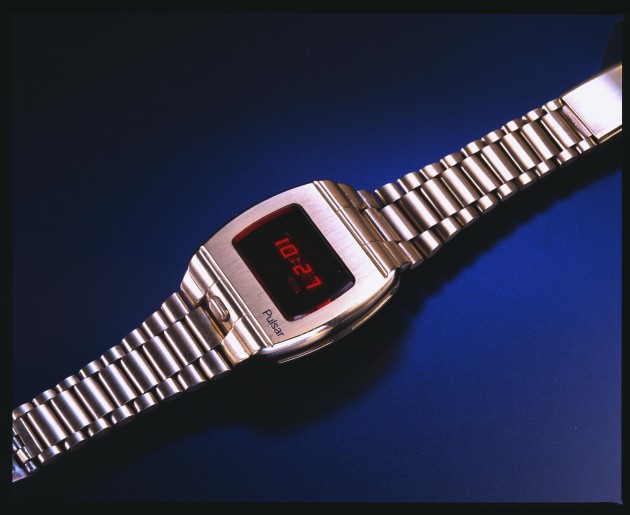 In 1972, the Hamilton Watch company released the Pulsar, which was the very first LED (light-emitting diode) digital display watch. “Others were trying to make an LED watch at the same time, but the Pulsar was the watch that had commercial success,” Stephens says. The Pulsar sold for $2,100 as a piece of high-end, very desirable men’s jewelry. It was very expensive, in part because it also had a quartz movement. 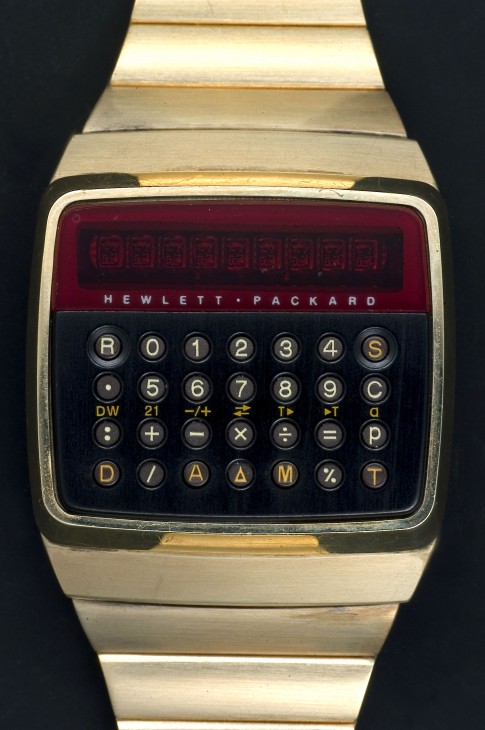 Two other unusual and onetime high-tech electronic wristwatches in the Smithsonian collection are the Hewlett Packard Calculator wristwatch, a watch with a built-in digital calculator; and DATALink, a watch produced in the 1990s through a partnership between Microsoft and Timex, that could talk to your desktop computer through an infrared transfer of information.

“The Apple Watch strikes me as something far different,” Stephens says. “They are calling it a watch I think mostly because it occupies the real estate that a watch occupies. And that is a very desirable place geographically, to be able to wear it and have it be visible at a glance. This wrist real estate is irresistible for people making products because it is so personal, easy to use and available. That we will always be wearing something on our wrists is almost guaranteed.”