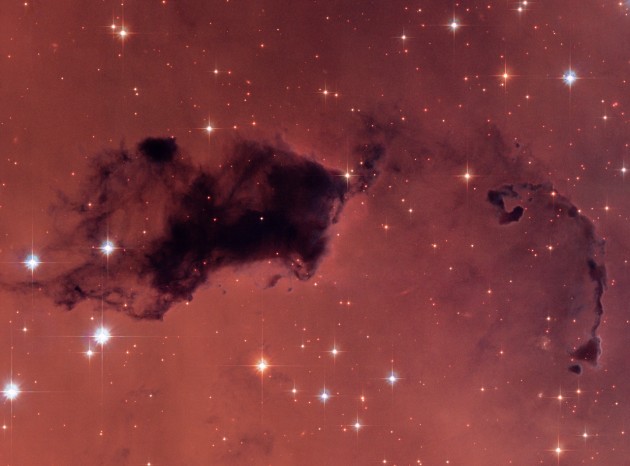 This Hubble image features dark knots of gas and dust known as “Bok globules,” which are dense pockets in larger molecular clouds. Similar islands of material in the early universe could have held as much water vapor as we find in our galaxy today, despite containing a thousand times less oxygen. (Photo by NASA, ESA, and The Hubble Heritage Team)

How soon after the Big Bang could water have existed? Not right away, because water molecules contain oxygen and oxygen had to be formed in the first stars. Then that oxygen had to disperse and unite with hydrogen in significant amounts. New theoretical work finds that despite these complications, water vapor could have been just as abundant in pockets of space a billion years after the Big Bang as it is today.

“We looked at the chemistry within young molecular clouds containing a thousand times less oxygen than our Sun. To our surprise, we found we can get as much water vapor as we see in our own galaxy,” says astrophysicist Avi Loeb of the Harvard-Smithsonian Center for Astrophysics (CfA).

The early universe lacked elements heavier than hydrogen and helium. The first generation of stars are believed to have been massive and short-lived. Those stars generated elements like oxygen, which then spread outward via stellar winds and supernova explosions. This resulted in “islands” of gas enriched in heavy elements. Even these islands, however, were much poorer in oxygen than gas within the Milky Way today.

The team examined the chemical reactions that could lead to the formation of water within the oxygen-poor environment of early molecular clouds. They found that at temperatures around 80 degrees Fahrenheit (300 Kelvin), abundant water could form in the gas phase despite the relative lack of raw materials.

“These temperatures are likely because the universe then was warmer than today and the gas was unable to cool effectively,” explains lead author and PhD student Shmuel Bialy of Tel Aviv University.

“The glow of the cosmic microwave background was hotter, and gas densities were higher,” adds Amiel Sternberg, a co-author from Tel Aviv University.

Although ultraviolet light from stars would break apart water molecules, after hundreds of millions of years an equilibrium could be reached between water formation and destruction. The team found that equilibrium to be similar to levels of water vapor seen in the local universe.

“You can build up significant quantities of water in the gas phase even without much enrichment in heavy elements,” adds Bialy.

This current work calculates how much water could exist in the gas phase within molecular clouds that will form later generations of stars and planets. It doesn’t address how much water would exist in ice form (which dominates within our galaxy) or what fraction of all the water might actually be incorporated into newly forming planetary systems.

This work has been accepted for publication in the Astrophysical Journal Letters and is available online. The authors are Shmuel Bialy & Amiel Sternberg (Tel Aviv University) and Avi Loeb (CfA). This joint project was carried out as part of the Raymond and Beverly Sackler Tel Aviv University-Harvard Astronomy Program.