Welcome to “Skin and Bones,” an augmented reality app for iPhone and iPad. It took two years of scanning, drawing and tapping the expertise of museum scientists to build the app — all without rearranging a single phalange, ilium or femur on exhibit. The app was developed specifically for the Smithsonian’s Bone Hall, at the National Museum of Natural History.

The Bone Hall’s collection of nearly 300 skeletons is one of the Smithsonian’s original displays, and aside from moving locations several times, it has basically remained unchanged for decades. App producers Diana Marques and Robert Costello wanted to give the old hall a fresh coat of virtual paint. 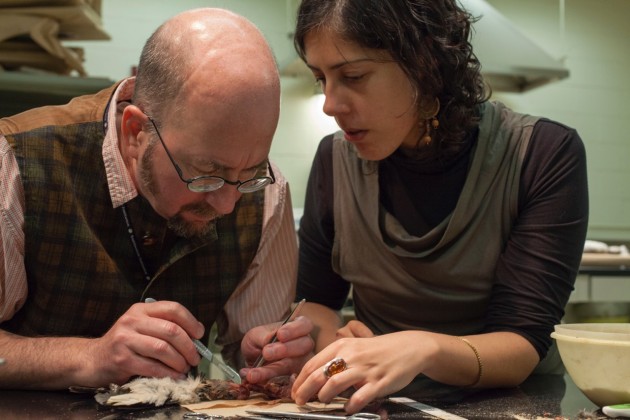 Robert Costello and Diana Marques dissect a woodpecker at the National Museum of Natural History. They used the specimen to study its tongue mechanism and later recreate the visuals and motion in 3-D for the augmented reality experience of “Skin and Bones.”

“The physical hall is a display of skeletal anatomy with almost no graphics. It is straight-up science,” says Costello, the Smithsonian’s national outreach program manager. “With ‘Skin and Bones,’ we wanted to use artistic inspiration to communicate science in ways that people can better understand.”

Marques and Costello used 3-D and CT scanners, dug through some occasionally hazardous attics and conducted specimen dissections to put virtual flesh back on the bones of 13 animals in the Bone Hall.

Download the app and point your phone at one of the skeletons identified by a bison-head decal, and suddenly a 20-foot-long Steller’s sea cow floats above you, alarmingly large; elsewhere, a bird known as an anhinga strikes at a fish with its spear-like bill and specialized neck muscles. 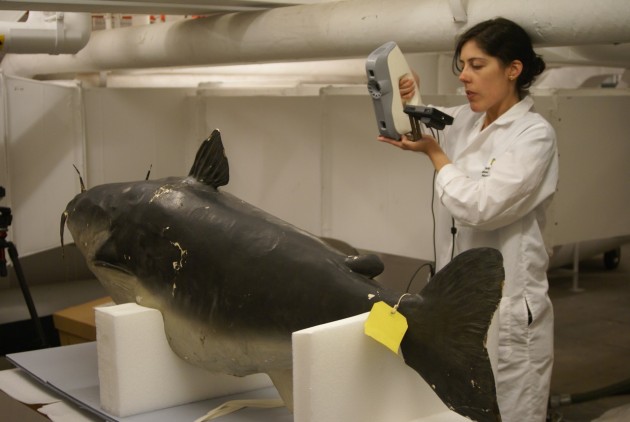 Smithsonian fellow Diana Marques makes a 3-D scan of the plaster cast of a blue catfish.

Costello said one of the main goals in updating the exhibit was to avoid the disruptive whiplash effect of reading placards.

“You read the label, then look at the object, then look back at the label,” Costello said. “Now, augmented reality integrates all that into a single interpretative experience, where you’re not distracted from the object but actually focused on it. It’s an overlay of technology that changes the way our visitors experience the exhibit.”

Marques, who is a Smithsonian Fellow and Ph.D. student from Universidade do Porto in Portugal, worked on the project as part of her dissertation in digital media. Together with Costello, they tackled updating the exhibit without actually touching it. The app also includes a menu of features containing videos, games and interviews with experts, designed to cater to a variety of interests.

The specimens included in “Skin and Bones,” such as this swordfish, were carefully chosen to highlight a full range of species, several for the special significance they hold within the Smithsonian itself.

The specimens included in “Skin and Bones” were carefully chosen to highlight a full range of species, several for the special significance they hold within the Smithsonian itself. The 150-pound blue catfish, for example, was included in the line-up because Marques and Costello discovered the original cast of the animal, asbestos included, stored in the museum’s attic. A plaster cast had been made in 1879 when the fish was still whole and fresh off an express train from a St. Louis fish market. The 3-D model of the fish you see through the app interface is the actual body of that skeleton, resurrected digitally.

Costello said future versions of the app will allow users to experience the Bone Hall from the comfort of their own homes. Simply by pointing the phone at a paper print-out of a skeleton from the exhibition, the animals will spring to life.