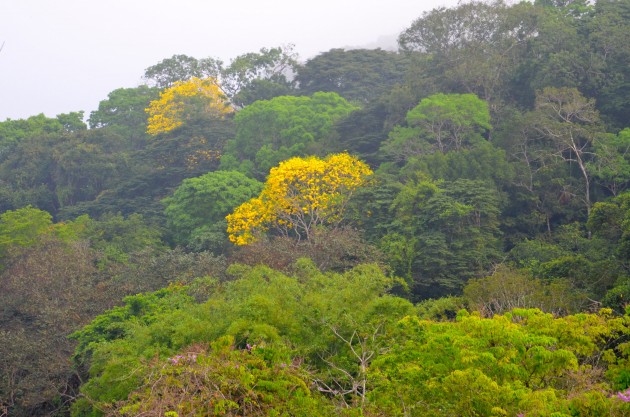 Human skin and gut microbes influence processes from digestion to disease resistance. Despite the fact that tropical forests are the most biodiverse terrestrial ecosystems on the planet, more is known about belly-button bacteria than bacteria on trees in the tropics. Smithsonian scientists and colleagues working on Panama’s Barro Colorado Island discovered that small leaf samples from a single tree were home to more than 400 different kinds of bacteria. The combined sample from 57 tree species contained more than 7,000 different kinds.

Bacteria in tropical forests may also play a vital role, protecting leaves against pathogens and even affecting the ability of forests to respond to climate change.

“Just as people are realizing that microbes carried by humans can have an influence on a person’s health—positive or negative—we hope to discover what bacteria on tree leaves can tell us about the health of a forest,” said S. Joseph Wright, a Smithsonian scientist and co-author of the new study published in Proceedings of the National Academy of Sciences.

In contrast to a previous study of bacteria on leaves in a temperate forest where different leaves had different bacteria, there was a core group of species of common bacteria present on leaves of nearly all of the species sampled in Panama. Just as on human skin, many of the bacteria on tropical tree leaves were Actinobacteria and Proteobacteria.

“Our ability to use molecular techniques like 16S ribosomal RNA gene sequencing to characterize nearly all of the bacteria on a leaf is going to make it possible to see how very different members of forest communities interact,” said Wright. The Smithsonian forest ecologist and his colleagues hope to collaborate with researchers at the 60 Forest Global Earth Observatory sites coordinated by the Smithsonian’s Center for Tropical Forest Science to compare interactions at different sites and under different environmental conditions.