Astronomers have discovered a transiting exoplanet with the longest known year. Kepler-421b circles its star once every 704 days. In comparison, Mars orbits our Sun once every 780 days. Most of the 1,800-plus exoplanets discovered to date are much closer to their stars and have much shorter orbital periods.

“Finding Kepler-421b was a stroke of luck,” says lead author David Kipping of the Harvard-Smithsonian Center for Astrophysics (CfA). “The farther a planet is from its star, the less likely it is to transit the star from Earth’s point of view. It has to line up just right.” 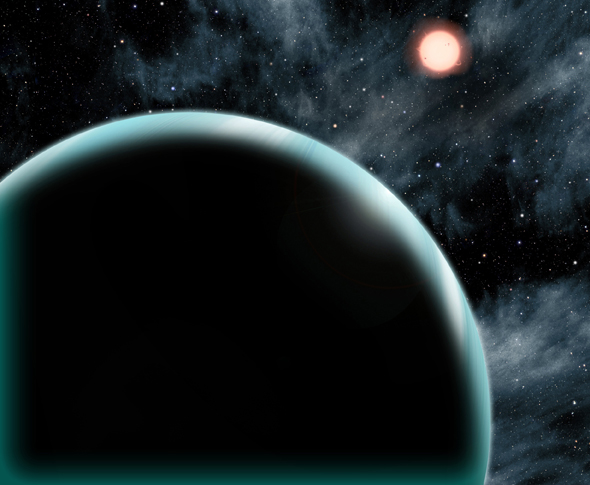 This artist’s conception shows the Uranus-sized exoplanet Kepler-421b, which orbits an orange, type K star about 1,000 light-years from Earth. (David A. Aguilar, CfA)

Kepler-421b orbits an orange, type K star that is cooler and dimmer than our Sun. It circles the star at a distance of about 110 million miles. As a result, this Uranus-sized planet is chilled to a temperature of -135¯ Fahrenheit.

As the name implies, Kepler-421b was discovered using data from NASA’s Kepler spacecraft. Kepler was uniquely suited to make this discovery. The spacecraft stared at the same patch of sky for 4 years, watching for stars that dim as planets cross in front of them. No other existing or planned mission shows such long-term, dedicated focus. Despite its patience, Kepler only detected two transits of Kepler-421b due to that world’s extremely long orbital period.

The planet’s orbit places it beyond the “snow line” – the dividing line between rocky and gas planets. Outside of the snow line, water condenses into ice grains that stick together to build gas giant planets.

“The snow line is a crucial distance in planet formation theory. We think all gas giants must have formed beyond this distance,” explains Kipping.

Since gas giant planets can be found extremely close to their stars, in orbits lasting days or even hours, theorists believe that many exoplanets migrate inward early in their history.

Kepler-421b shows that such migration isn’t necessary. It could have formed right where we see it now.

“This is the first example of a potentially non-migrating gas giant in a transiting system that we’ve found,” adds Kipping.

The host star, Kepler-421, is located about 1,000 light-years from Earth in the direction of the constellation Lyra.