The name Panama is said to mean “abundance of fish.” Now a new study estimates that between 1950 and 2010, the amount of fish taken from Panama’s waters was so considerable that officials could not keep tabs on more than a third of the catch.

For the last three years Héctor Guzmán of the Smithsonian Tropical Research Institute and colleagues from the University of British Columbia have been compiling official data and dozens of studies of off-the-books fisheries in Panama. They cautiously estimated that almost 40 percent of the total catch — including tuna, lobster, shellfish and shark — was unaccounted for. Today, as fish stocks dwindle, this revelation may contribute to establishing sustainable fisheries in Panama and the region.

“We estimated missing and under-reported components very conservatively so this is likely still an underestimate of what is being removed,” said Sarah Harper, of UBC’s Sea Around Us Project who was the lead author on the study published in Marine Fisheries Review. Guzmán and UBC’s Kyrstn Zylich and Dirk Zeller co-authored the research. 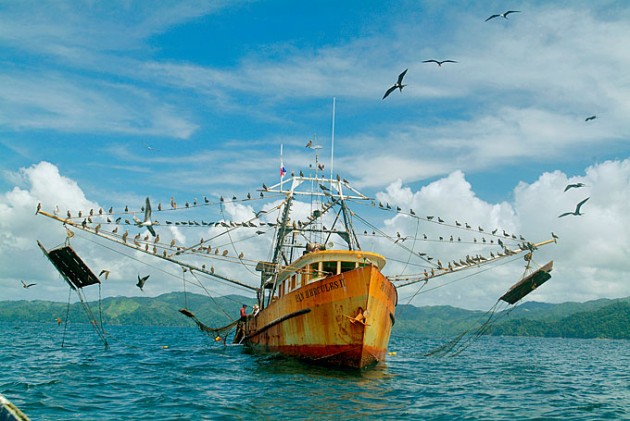 A fishing boat in Panamanian waters.

The discrepancy is due to minimal reporting of bycatch by commercial vessels and a dearth of data from recreational, subsistence and artisanal fishers. Illegal fishing by foreign vessels and catches by Panamanian-flagged ships operating from foreign ports also play an important role.

“We were not surprised by these alarming results,” said Guzmán a marine ecologist known for research that underpins regional conservation policy. “This is the first fishery baseline made for Panama. We hope to promote an open and all-inclusive dialogue to implement management tools for sustainable fisheries.”

From anchovies to Sharks

Panama’s industrial fisheries developed in the 1960s to harvest herring and anchovies for fishmeal and oil for export. The scallop fishery reached its apex in the 1980s and collapsed without recovery in 1991. Shrimp, tuna, lobster and conch harvesting continue, with many populations now in decline.

Relatively new targets are sharks, especially hammerheads, for sale of shark fins overseas. Sharks are often harvested in inshore areas, including vulnerable nurseries. “There is likely substantial under-reporting of catches by domestic vessels and possibly a large number of sharks being caught by foreign vessels operating illegally in Panamanian waters,” the authors wrote.

Under-reporting of catch is not unique to Panama and improved monitoring does not have to be prohibitively costly. “Resource-limited countries can still effectively monitor their fisheries by implementing regular, non-annual surveys,” said the authors. “For Panama to retain meaning in its name (“abundance of fish”), fisheries management will need to make substantial improvements.”