Two worlds orbiting a distant star are about to become a snack of cosmic proportions. Astronomers have announced that the planets Kepler-56b and Kepler-56c will be swallowed by their star in a short time by astronomical standards. Their ends will come in 130 million and 155 million years, respectively.

“As far as we know, this is the first time two known exoplanets in a single system have a predicted ‘time of death,'” says lead author Gongjie Li of the Harvard-Smithsonian Center for Astrophysics (CfA).

She presented her research in a press conference at a meeting of the American Astronomical Society.

The Kepler-56 system provides a glimpse into the future of our solar system. In about five billion years our Sun will become a red giant star, swelling to immense proportions and engulfing Mercury and Venus. 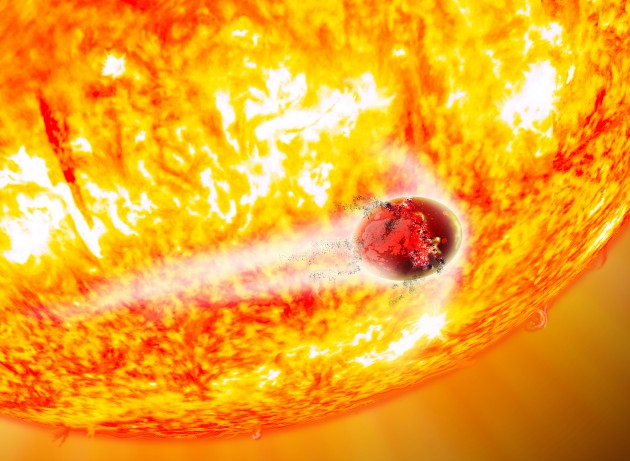 In this artist’s conception, the doomed world Kepler-56b is being tidally shredded and consumed by its aging host star. New research shows that Kepler-56b will be engulfed by its star in about 130 million years, while its sibling Kepler-56c will be swallowed in 155 million years. This is the first time that two known exoplanets in a single system have a predicted “time of death.” (David A. Aguilar, CfA)

The star Kepler-56 is becoming a red giant star as well. It already has ballooned out to four times the Sun’s size. As it ages, it will continue to expand outward. Not only will the star grow larger, but its tides will get stronger, dragging its planets inward to their eventual doom.

Kepler-56b orbits its host star once every 10.5 days, while Kepler-56c orbits every 21.4 days. Both of them are much closer to their star than Mercury is to the Sun. As a result, they will meet their fate much faster. Li and her collaborators calculated the evolution of both the star’s size (using the publicly available MESA code) and the planets’ orbits to predict when the planets will be destroyed.

Even before they vanish, the two planets will be subjected to immense heating from the steadily growing star. Their atmospheres will begin to boil off, and the planets themselves will be stretched into egg shapes by stellar tides.

The only survivor in the system will be Kepler-56d, a gas giant planet circling in a 3.3-Earth-year orbit. It will watch from a safe distance as its two sibling worlds meet their demise.

The Kepler-56 planetary system also is notable for being the first “tilted” multiplanet system to be discovered. The orbits of the inner two planets are tipped significantly from the star’s equator. This was unexpected since planets form from the same disk of gas and dust as the star, so they should orbit in nearly the same plane as the star’s equator (as do the planets in our solar system).

The team was able to better constrain the tilt of these planets, compared to earlier work. They found that the most probable tilt was either 37 or 131 degrees.

Li and her colleagues also investigated the inclination of the outer planet and determined that its orbit is likely to be tilted relative to the star as well. Future observations should help astronomers to characterize this system, and to explain how it became so skewed.