Turtles have long been the subject of one the most contentious questions in evolutionary biology: where do they fit among vertebrates in the evolutionary tree of life? Now, in a new study in the journal Evolution & Development scientists have determined that turtles are more closely related to birds and crocodilians than to lizards and snakes. The study is based on the combined data from anatomical, DNA and microRNA studies.

“This study represents a first, most basic step in establishing the actual pattern of the reptile tree of life,” says lead author Daniel Field, a Yale graduate student and a predoctoral fellow at the Smithsonian’s National Museum of Natural History. “In evolutionary biology the first thing that you need to understand the evolution of anything is an accurate picture of how different groups of animals are related. Once we have an accurate evolutionary framework, then we can start to really try to understand how interesting and unique features, such as the turtle’s shell, came to be.” 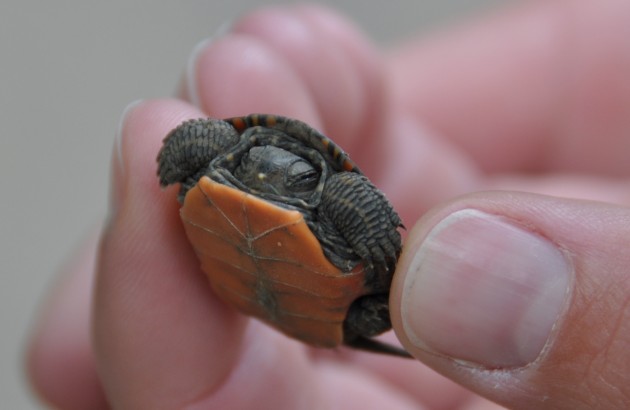 A research team from Dartmouth, Yale, the Smithsonian and other institutions looked at how the major groups of living reptiles, which number more than 20,000 species, are interrelated. The relationships of some reptile groups are well understood–birds are most closely related to crocodilians among living reptiles, while snakes, lizards and New Zealand’s tuatara form a second natural group. But the question of how turtles fit into this evolutionary picture has remained unclear. Are turtles more closely related to archosaurs (birds and crocodilians) or to lepidosaurs (lizards, snakes and tuatara)? Or are these other reptiles more closely related to each other than to turtles?

A growing number of studies examining DNA sequences have suggested a close evolutionary kinship between turtles and archosaurs, but those results were contradicted by anatomical studies and a recent study of small biomolecules called microRNAs. Because microRNAs are viewed by some as excellent evolutionary markers, the conflict between the microRNA and DNA results meant the turtle-archosaur link was viewed skeptically by many.

But the team’s research suggests the earlier microRNA conclusions were erroneous, and instead indicates that microRNAs and DNA sequences yield a common signal—that turtles share a more recent common ancestor with birds and crocodilians than with lizards and snakes.

“That common ancestor probably didn’t look anything like a modern bird or a modern crocodilian, but we know that it had to have existed,” Field explains. “These divergences among the major groups of reptiles likely happened in the Permian, more than 250 million years ago.”