Sometimes you need to look in unusual places to tell species apart. Some mammal species are easily distinguished by differences in their fur or skeletons, while other more cryptic groups require further scrutiny in their more delicate areas.

Ph.D. student Ligiane Moras is doing just that in her attempt to find characteristics that can separate species in a group of dog-faced bats, Cynomops, native to Central and South America. Using the extensive bat collection at the Smithsonian’s National Museum of Natural History and a very powerful electron microscope, Moras has found potential species differences in the tissues, glans and spines that cover the skin of their tiny penises.

“Epithelial spines can be found on the penis of many bat species. The spines on these bats are microscopic, about 20 micrometers long, so you can only see them with the electron microscope” Moras says. “All the bats in this group have these spines, but I have been able to find differences between potential species in spine length.”

Genitals come in many shapes and sizes

Extreme variation in male genital morphology is a common trend across animals that reproduce through internal fertilization, including bats. Even closely related species with similar general morphology often have strikingly different genitalia. “When I couldn’t find differing characteristics in the skeleton or skins of this bat group, I started looking at the structures of the penis,” Moras explains. “Often changes can be found in the genitals between species due to sexual selection.” 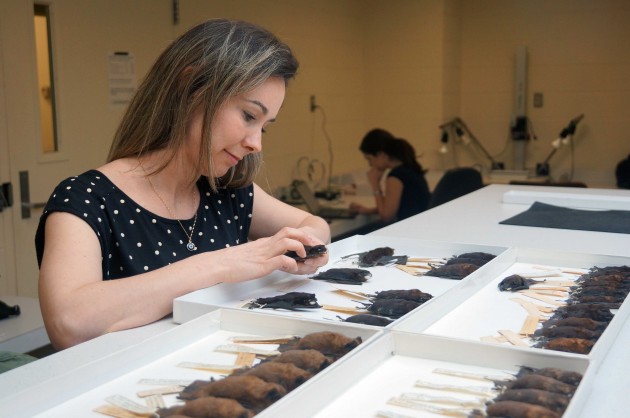 Sexual selection is a mode of natural selection in which some individuals out reproduce others of a population, which eventually can lead to the formation of a new species. Successful individuals may have behavioral or morphological traits that better ensure their genes are passed on to the next generation. These may include traits that attract the opposite sex, enable the successful delivery of sperm or ensure the survival of their young.

While the purpose of the spines has not been fully uncovered, scientists believe they might assist in this sexual competition. In mammal species where females frequently mate with multiple males, competition between males extends beyond attraction of mates to include sperm competition. These spines might have several roles, such as acting like a microscopic brush to remove competing sperm from the female reproductive tract or, in some bat species, aiding in the removal of a sperm plug.

In some bat species the male deposits a gelatinous secretion into the female’s genital tract after his sperm is delivered. This secretion later hardens to create a barrier to the sperm of competing males. Breaking down this barrier and removing the rival sperm before they reach the egg is crucial if a newcomer is going to have a fighting chance at fatherhood. 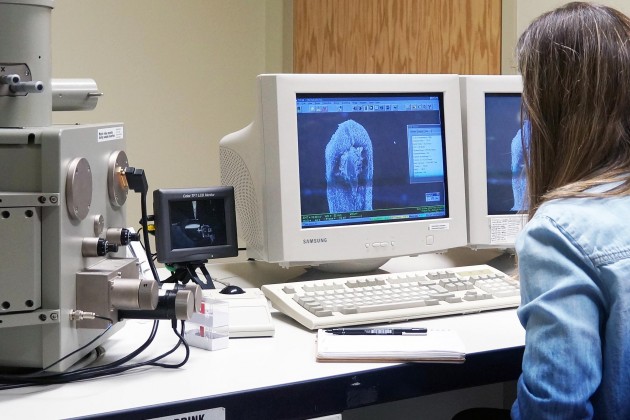 Ligiane Moras uses a scanning electron microscope at the Smithsonian’s National Museum of Natural History to study the morphology of bats. (Photo by Micaela Jemsion)

Looking in other unusual places to organize the bat family tree

While Moras has had some success in finding several characteristics of the penis that differ between potential species of the Cynomops genus, it is not the only place she is looking.

“I have also used the electron microscope to look at the tongue structure of these specimens,” Moras says. “I have found that the number of fungiform papillae on the side of the tongue–the little bump-like structures we also have on our own tongues–vary in frequency between potential species of this genus”.

Moras, who is studying zoology at Universidade Federal de Minas Gerais in Belo Horizonte, Brazil, aims to publish her taxonomic work in the near future, when she will present a complete family tree for this bat genus based on the different morphological characteristics she has found in some unusual places.