An ancient new player has entered the debate over global warming and it is pink.

Labrador fishermen call them “red rocks” because underwater they resemble odd-shaped pastry topped with thick pink frosting. The color is the living algae Clathromorphum compactum and the hard rocklike material on which it sits are layers of calcified crusts the algae deposit year after year. They grow in shallow water (49 to 55 feet deep) and are widely distributed in the Arctic and sub-Arctic Oceans. 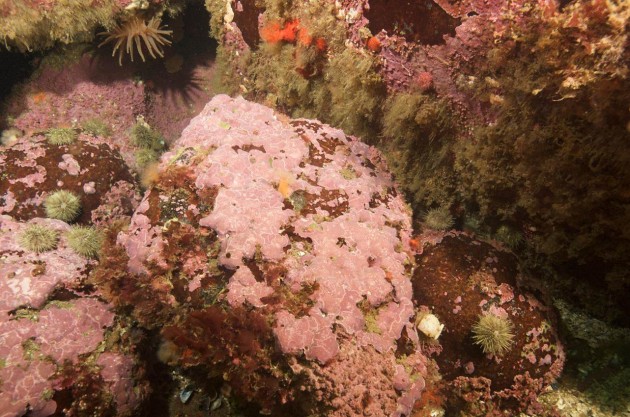 Clathromorphum compactum red rock in Labrador. These crusts are commonly 100 years old, and under the right conditions can reach ages of more than 1,000 years. (Photo courtesy Walter Adey)

Now, scientists from the University of Toronto, the Smithsonian and other research organizations have discovered how to use these crusty layers to track changes in Arctic sea ice over centuries, says Jochen Halfar, an associate professor in the University of Toronto’s Department of Chemical and Physical Sciences. Halfar is co-author of a paper printed in Proceedings of the National Academy of Sciences reporting that this newly tapped ‘archive’ shows a dramatic decrease in ice cover during the last 150 years.

Each year C. compactum can lay down a crust one-tenth to two-tenths of a millimeter thick. “They grow very slowly so if you get a specimen that is 8 or 9 inches thick you are talking about something that is well over 1,000 years old,” explains co-author Walter Adey, algae expert at the Smithsonian’s National Museum of Natural History. When viewed under a scanning electron microscope the layers offer an archive of the levels of sea ice in the Subarctic dating back centuries.

The algae’s growth rates depend on the temperature of the water and the amount of light they receive. As snow-covered sea ice accumulates on the water over the algae, it turns the sea floor dark and cold, stopping the plants’ growth. When the sea ice melts in the warm months, the algae resume growing their calcified crusts. This continuous cycle of dormancy and growth results in visible layers that can be used to determine the length of time the algae were able to grow each year during the ice-free season.

During several research cruises led by Adey divers retrieved specimens of C. compactum rocks for study from near-freezing seawater in the sub-Arctic. The more than 5,000 red rock samples Adey has collected are part of a growing climate archive housed at the Smithsonian’s National Museum of Natural History. 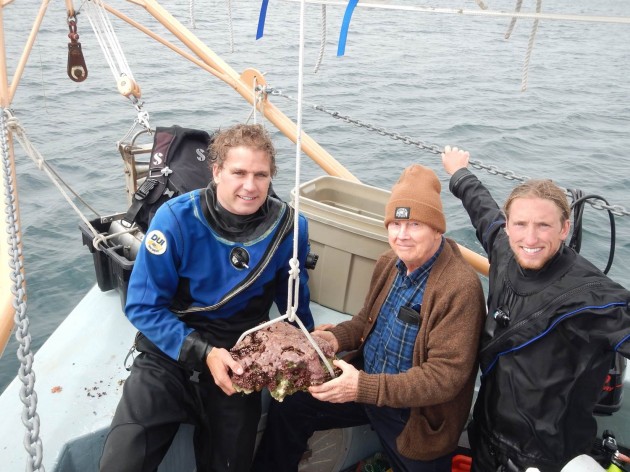 “It’s the same principle as using rings to determine a tree’s age and the levels of precipitation,” Halfar says. “In addition to ring counting, we used radiocarbon dating to confirm the age of the algal layers.”

After cutting and polishing the algae, Halfar took thousands of microscope images of each sample. The images were combined to give a complete overview of the fist-sized specimens. 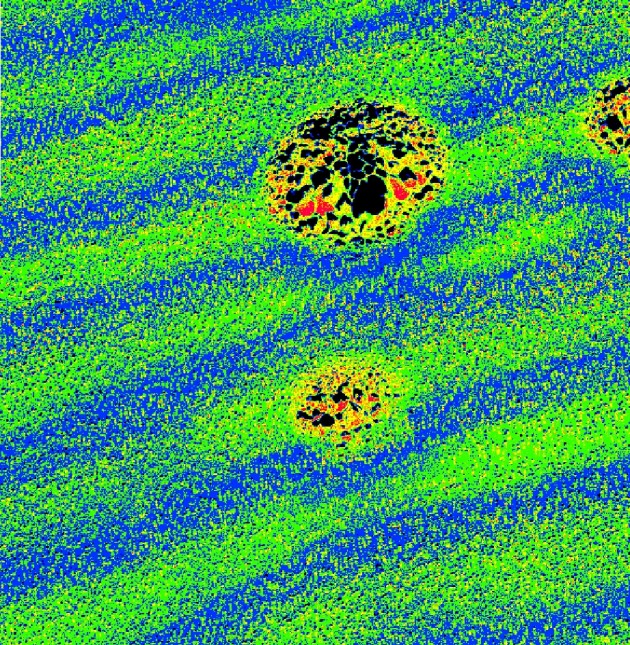 When cut and analyzed for its element composition, algal growth layers reveal pronounced chemical differences. Green indicates high amounts of magnesium that are incorporated into the calcite mineral structure during warm summer months, whereas blue reflects low amounts of magnesium characteristic of low temperatures. Circular spongy features are reproductive structures embedded in the algal skeleton. Scale is 1mm from top to bottom, 7 years of growth are shown. Image courtesy of Andreas Kronz

“In addition these algae have what is called a high-magnesium calcite skeleton,” Adey explains. “Basically, the higher the water temperature the more magnesium it lets into its skeleton. Magnesium levels are a precise record of temperature that can be read sometimes down to a week.” Measuring the magnesium levels found in each growth layer is an additional method the scientists used to corroborate the growth periods indicated by the layer thickness.

During the Little Ice Age, a period of global cooling that lasted from the mid-1500s to the mid-1800s, the algae’s annual growth increments were as narrow as 30 microns due to the extensive sea-ice cover, Halfar says. However, since 1850, the thickness of the algae’s growth increments have more than doubled, bearing witness to an unprecedented decline in sea ice cover that has accelerated in recent decades.

These coralline algae represent not only a new method for climate reconstruction, but are vital to extending knowledge of the climate record back in time to permit more accurate modeling of future climate change, Halfar says. “In the north, there is nothing in the shallow oceans that tells us about climate, water temperature or sea ice coverage on an annual basis. These algae, which live over a thousand years, can now provide us with that information.”  –Source: University of Toronto, Smithsonian