They’ve got no roots or veins and grow in hanging pendants or tightly packed mats attached to stones, soil and wood. Called by some “the secret plants that surround us,” the bryophytes (mosses and liverworts) were the first plants to colonize dry land 475 million years ago. Today more than 26,000 bryophyte species populate the earth.

Now, a recent experiment with a number of tropical species of bryophytes in western Panama suggests that some of these plants may be able to adapt to the warming temperatures that global warming will bring. 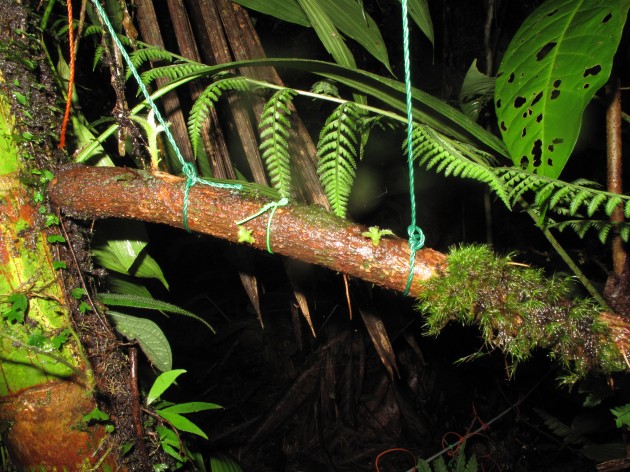 Tropical moss of the species Leucoloma cruegerianum can bee seen growing to the right on this branch at a study site in western Panama. (Photo by Sebastian Wagner)

Researchers from the University of Oldenburg, Germany and the Smithsonian Tropical Research Institute in Panama, collected 15 individual plants each of 9 common species of bryophytes found growing at cool higher altitudes in the tropics and transplanted them at lower altitudes where temperatures were an average of 2.6 to 3.6 degrees Celsius warmer.

In the tropics bryophytes are scarce in the warm, drier lowland areas but prolific in higher mountain areas where temperatures are lower and the humidity is higher. As botanist Gerald Zotz, of the University of Oldenburg and the Smithsonian explains, a bryophyte’s survival is a balancing act between its daytime intake of carbon during photosynthesis and its nighttime loss of carbon through respiration. This balance is dependent on temperature and humidity. 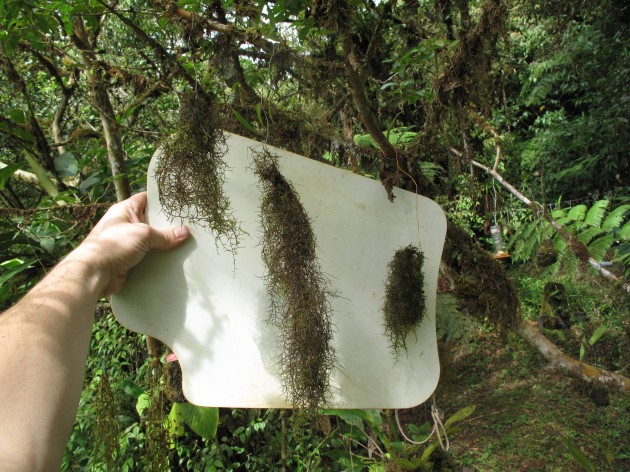 Specimens of pendant mosses of the Frullania species hang from wires in a study plot in western Panama. (Photo by Sebastian Wagner)

Higher temperatures and dry conditions can reduce daytime photosynthesis in bryophytes, leading to lower carbon intake. Warmer, dry conditions also increase carbon loss at night through higher respiration rates. (Earlier studies have shown that at optimum temperatures bryophytes lose at night on average 60 percent of the carbon they gained the previous day.) If a bryophyte’s carbon loss is greater than its carbon intake over an extended period the plant will die.

A majority of the bryophytes transplanted downhill to warmer spots died, but “the most striking result of our study was the finding that at least a few samples of most of the tested species survived higher temperatures for at least 20 months and totally recovered growth during this time,” botanists Sebastian Wagner, M.Y. Bader and Zotz write in a paper which appeared recently in the journal Plant Biology. 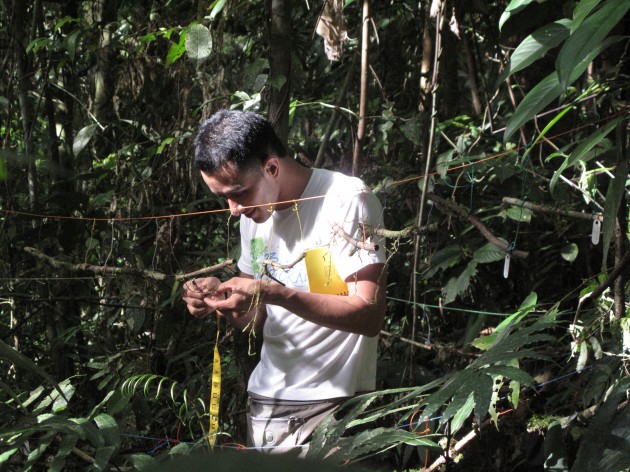 Research student Steve González takes growth measurements in a study plot of transplanted bryophytes at the Smithsonian Tropical Research Institute where scientists are assessing the ability of these plants to acclimate to global warming. (Photo by Sebastian Wagner)

“All species have a few individuals that can apparently deal with increased temperatures of 3 degrees Celsius,” Zotz says. “This indicates that there is indeed quite a bit of potential for acclimation.”

In light of these new findings, “it may be puzzling why we do not find more of these species in the lowlands,” Zotz points out. In fact, he continues, some highland bryophytes are found living in the warmer lowlands but they are usually restricted to moist microsites, such as the pendant mosses growing on Annona glabra trees around Lake Gatun, in Panama. Increased moisture may weaken the adverse impact of higher temperatures on bryophytes in the lowlands.

Bryophytes living in the lowlands in the tropics already seem to “live at the edge,” of their temperature tolerance,” Zotz adds. In an upcoming experiment “we are planning to expose lowland species to higher temperatures to see whether they are already at the very limit of their adaptive range,” Zotz says. “If this were true the predicted temperature increases in the future would have serious implications for lowland habitats.”

As the researchers conclude in their paper many species of bryophytes “from higher altitudes indeed will experience problems at higher temperatures,” with their population ranges potentially being shifted uphill.

Still, a second scenario for the impact of rising temperatures on bryophytes in the tropics is for “individuals having the acclimation potential to maintain populations at the present altitude, evolving to be better adapted to high temperatures,” the study says. Some species with a large acclimation potential might even benefit from global changes due to elevated carbon dioxide concentrations and/or reduced competition.  –John Barrat