Few fish in the sea sport an odder appendage than the remora, which grows a suction cup on the top of its head. Widely known as the “sharksucker,” these fish evade the work of swimming by affixing their suction disc to larger creatures—whales, sharks, sea turtles—and then hitchhiking along for the ride. Whenever its host tears into a meal, say a shark chomping a seal, the remora makes a picnic of the floating scraps.

Recently, in a paper describing the remora’s suction disc as “one of the most remarkable and most highly modified skeletal structures among vertebrates” David Johnson of the Smithsonian’s National Museum of Natural History and Ralf Britz of the Natural History Museum, London, proved definitively that this strange appendage is in fact the remora’s dorsal fin, albeit wildly altered. Here Johnson, a taxonomist at the Smithsonian, answers a few questions regarding the remora and its suction disc. 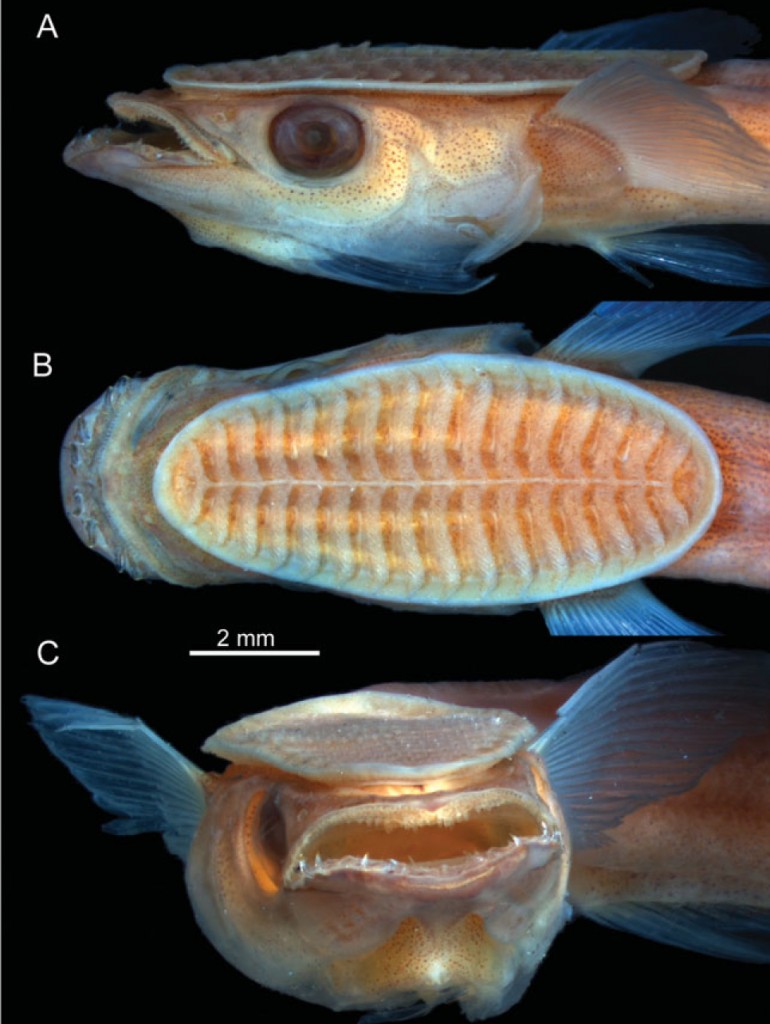 Head of a young remora (Remora osteochir) 26.7 millimeter long as seen fron the (A) side, (B) top and (C) front. (Images courtesy David Johnson)

Q. Many people have studied the remora, but you and Ralf Britz are the first to prove its suction disc is a modified dorsal fin. How did that come about?

A. The idea that the sucker disc is developed from the dorsal fin [the fin at the top] is not new and dates to the early 1800s. Since then, many scientists have suggested it was derived from the dorsal fin but nobody before us had studied the development of the remora from its earliest larval stages. One reason I think this hasn’t been done before is due to the difficulty in finding early stage remora larvae.

In our study we closely tracked the development of the sucking disc beginning with tiny remora larvae, through to juvenile and adult remoras. We followed the earliest stages of the disc’s development by matching the first vestiges of elements of the sucking disc with the first vestiges of elements of the spinous dorsal fins of another fish, the White Perch, genus Morone, with a typical spinous dorsal fin. By doing this we were successfully able to identify which of three main fin elements—the distal radials, the proximal-middle radials, and the fin spines—are radically modified and develop into the different elements of the remora’s unusual disc. 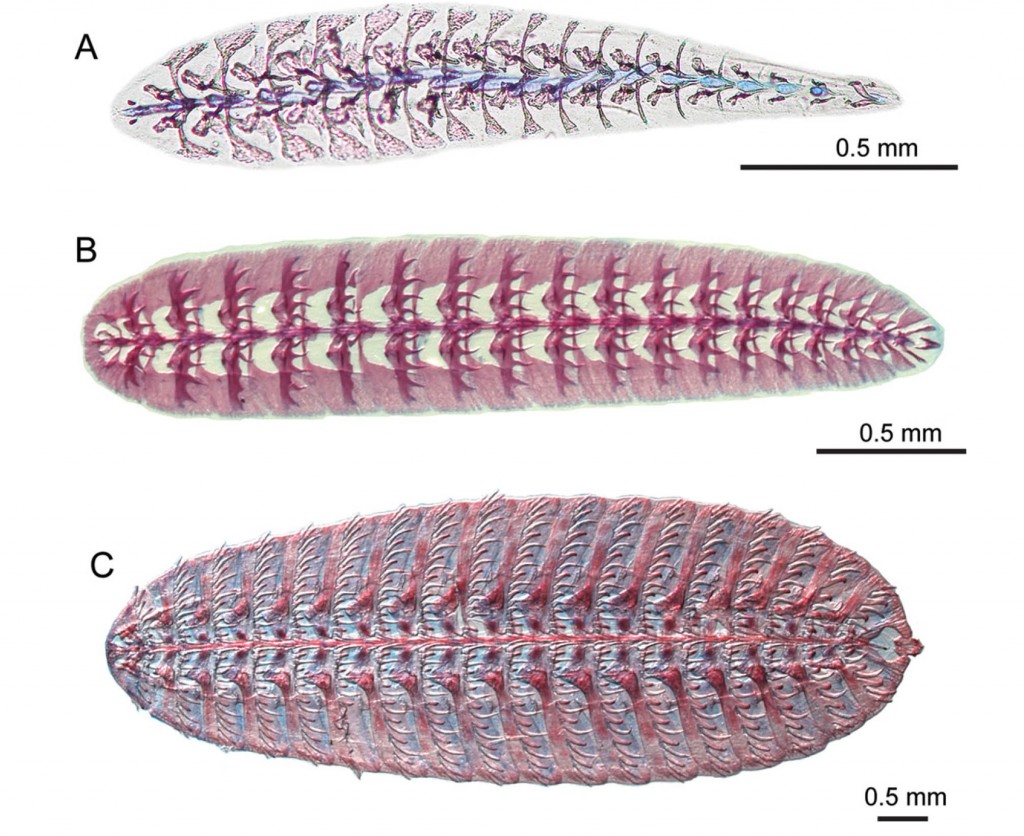 A. Like most larvae of marine fishes remora larvae appear quite different from the adults of their species. They hatch with no sucker disc and it develops as they mature, traveling forward from the anterior part of the back to the top of the fish’s head. The larvae of most marine fishes really exist in a different evolutionary arena, living in plankton in the top 200 meters of the ocean’s surface. It’s totally different there and the larvae have adaptations for living in the plankton layer that they lose as they mature. For a fish taxonomist like me these early developmental stages are where the action is.

One interesting point: remora larvae before developing their disc have very distinctive hooked teeth protruding from the lower jaw. Because remora larvae at this stage are relatively rare in plankton collections, I have often wondered, although we don’t have any evidence for it, if maybe remora larvae are not free living in the plankton layer but go into the gill cavities of fishes and using their hooked teeth, hanging on there until they develop a disc.

Q. Where did you find remora larvae?

A. Finding tiny, juvenile remora specimens was critical to this study. In 2004, I spent seven weeks in Tokyo at the National Museum of nature and Science going through jars of tiny plankton specimens collected by Japanese scientists during the 1950s through to 1980 during a study of the spawning grounds of tunas and billfishes. The specimens were unsorted and there was a lot of material to sort through. Anytime I found a juvenile remora small enough so that its disc wasn’t fully developed, I picked it out asked that it be shipped to me along with many other larvae I borrowed from those collections.  For our study we had to get back to the stages where the sucker disc is only about 1 millimeter long and earlier to observe how it develops.   Later we also obtained a few tiny larvea from collections of the Souteast National Marine Fisheries Laboratory in Miami.

Q. How do you see the bones and connective tissue in tiny fish larvae?

A. We use a chemical process known as clearing and staining, in which a chemical called trypsin is used to dissolve a specimen’s muscle tissue. The specimen is then placed in the chemicals alcian blue, which stains the cartilage blue, and alizarin red, which stains their bones red. The specimen is then placed in glycerine, rendering the remaining tissue clear. This method is critical to my work, as it gives us a fully articulated specimen in which we can clearly see and photograph, through a microscope, the development of a fish’s skeleton from the very first forming of its cartilage.

Q. Is the remora considered a parasite?

A. No. Remoras are not really doing anything except hitchhiking on the shark. It is just a hitchhiker, it conserves energy that way.

A. I’ve often wondered about that, I’d like to try them sometime. I’ve asked people if they have eaten them and I’ve never found anybody who has. I don’t see why they wouldn’t be OK to eat although there is probably not a large amount of meat on them.

“Ontogeny and Homology of the Skeletal Elements That Form the Sucking Disc of Remoras (Teleostei, Echeneoidei, Echeneidae),” by Ralf Britz and G. David Johnson was published in the December 2012 issue of the Journal of Morphology.