An investigation by the Boston Globe in October revealed widespread mislabeling of seafood in Massachusetts: 48 percent of the fish their reporters purchased in restaurants, grocery stores and markets was mislabeled. A similar study in this month’s Consumer Reports reveals that more than 20 percent of fish bought at restaurants and retailers in New York, New Jersey and Connecticut was mislabeled or incompletely labeled. Sole and red snapper are species most likely to be substituted for less expensive brands.

Both investigations were carried out through DNA analysis of fish tissue performed in a laboratory using a U.S. Food and Drug Administration protocol that originated largely at the Smithsonian’s National Museum of Natural History. In addition, the DNA from the fish in question was identified by matching it against a database of DNA fish barcodes that again, has its origins at the Smithsonian. 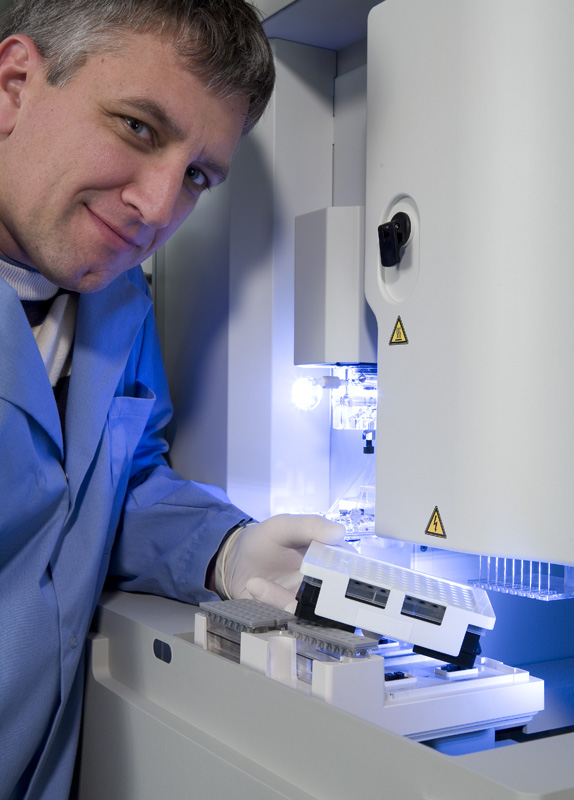 Lee Weigt, director of the Laboratories of Analytical Biology (Photo by Ken Rahaim)

To help strengthen its ability to enforce seafood-mislabeling laws, the U.S. Food and Drug Administration approved a new protocol that standardizes the method of DNA analysis used to identify fish species in seafood. The Laboratories of Analytical Biology at the Smithsonian’s National Museum of Natural History, the Canadian Center for DNA Barcoding at the University of Guelph and the FDA’s offices of Regulatory Science and Regulatory Affairs and Center for Veterinary Medicine collaborated to develop the new protocol.

Lee Weigt, director of the Smithsonian’s Laboratories of Analytical Biology, and lab technician Andrea Ormos, are two of the protocol’s 10 authors. Recently, Weight took a few moments to answer some questions about his role in the FDA’s new DNA barcoding protocol for seafood with
Smithsonianscience.org. 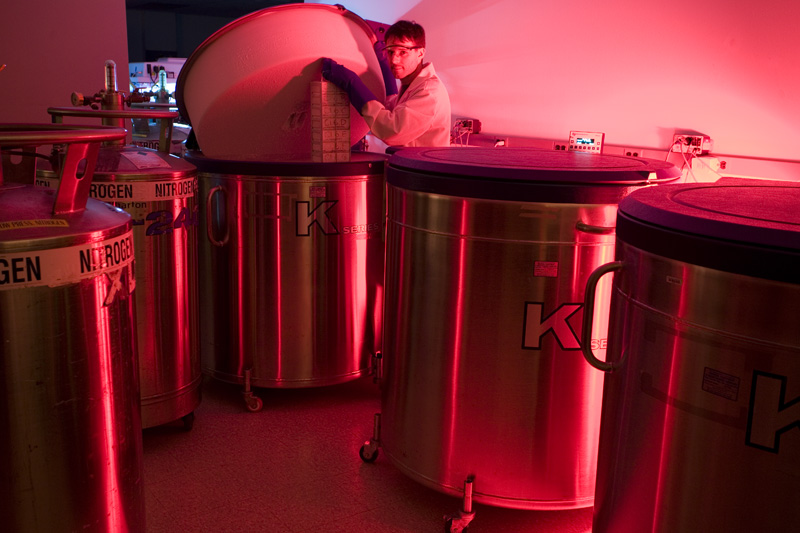 Q. What exactly is this new protocol and who can use it?

Weigt: It spells out in detail the specific steps required to collect tissue from a piece of seafood and how to extract, amplify, sequence and read the DNA in that tissue and then match it against a database of DNA barcodes. Any regulatory decisions the FDA makes or any legal actions it takes must be based on information acquired in an approved, validated way. It must be able to hold up in court. This procedure can be used in any laboratory across the world to achieve trustworthy results.

Q. What part did you and Andrea Ormos play in its development?

A. We do DNA analysis for the National Museum of Natural History on a daily basis on a variety of organisms, not just fish. The FDA protocol is very much based on the procedures we developed and use every day. While the basic steps for extracting and sequencing DNA are similar for all organisms, it can be tweaked to favor specific families of animals. For this protocol, we tailored little details so it would have a higher success rate for fish. 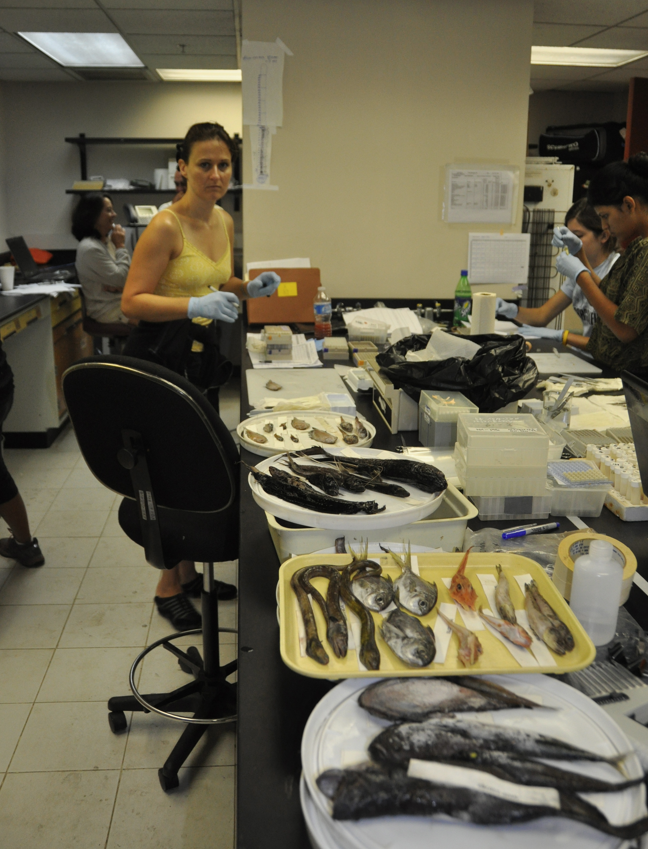 Andrea Ormos prepares fish collected during a recent trip to Panama by the Smithsonian’s fish barcode team. The team brought back almost 5,000 fish from around the world, as well as 800 deep-water fish from trawls along the Pacific coast of Central America. (Photo by Lee Weigt)

For example, one thing we did was tweak the ingredients in the primer “cocktail” used in the polymerase chain reaction which amplifies the CO1 (cytochrome c oxidase subunit 1) gene to millions of copies so we can work with and see its sequence. The gene is a couple of thousand bases long, yet its noticeable differences are found only in a conserved region. Rather than looking at the entire gene, the primer acts like a flag along a mile-long race, focusing on, say, points at 100 and 500 yards. In these conserved regions of the gene there is plenty of information to differentiate between fish species, so that is where we fine-tuned this protocol to focus.

In addition, we tested the protocol over and over by doing double-blind and triple-blind tests with the FDA labs and the Canadian Center for DNA Barcoding. We each tested tissue from the fish again and again following this protocol, and we each reached the same results again and again.

Q. Does this procedure work for cooked fish?

A. Yes. It is possible to get a DNA reading from cooked seafood, but it takes more effort…cooking makes it harder and eliminates the guarantee for success. To test this protocol, I went to the store and bought canned tuna, smoked mackerel, and other fish that had been processed, heated and pressurized. I even grabbed a can of ocean fish cat food. Andrea and I tested these products and we got answers for all of them.

Q. How did the Smithsonian get involved in this project?

A. Where fish are concerned, no one can rival the Smithsonian in our long-term collections, professional taxonomists and our DNA laboratory experience. We have a DNA database of barcodes that we developed for hundreds of species of fish. Any laboratory can extract and sequence the barcode for a species of fish, but each or our barcodes is backed-up by a real specimen in the Museum of Natural History collections which was first identified as to species from its physical characteristics by one of our expert taxonomists in the Division of Fishes. Our collection is the best—it is documented data that is impossible to argue with. Long ago the FDA recognized the power of partnering with the Smithsonian for identifying fish. Our lab and the FDA have teamed up for years.

The Smithsonian’s DNA database for fish got its start years ago because our scientists had a great interest in larval fishes—which look nothing like adult fish—and fish eggs. Scientists would return to NMNH from a collecting expedition with a number of tiny larvae and have no idea what species they were. We started doing DNA barcodes of adult fish and then matching the larva and egg DNA to the adult fish barcodes to determine the species.

While Smithsonian scientists are interested in all fish, the FDA is interested primarily in those fish used in seafood. Our first DNA-barcode collaboration with them began with crustaceans—lobsters, crabs and shrimp.

Q. What are other potential uses for DNA barcoding?

A. I believe this is just the beginning. DNA barcode identification has great potential for medicines, for the work of the U.S. Customs and Border Protection and USDA, to name a few. Ultimately, I think we will have field test kits where an inspector can just rub a smart phone against a sample of fish and it will connect to the fish DNA barcode database, and identify a fish as red snapper or what have you. The technology is not that far off.

The power of being able to do this comes back to the Smithsonian and the role its scientists have done in advance in building a global reference library of biodiversity. The Smithsonian is the champion in this area and society is coming around to need our skills and the collections that we have built over the centuries. Taxonomy is not dusty old museum science the way it was when I first got into it.